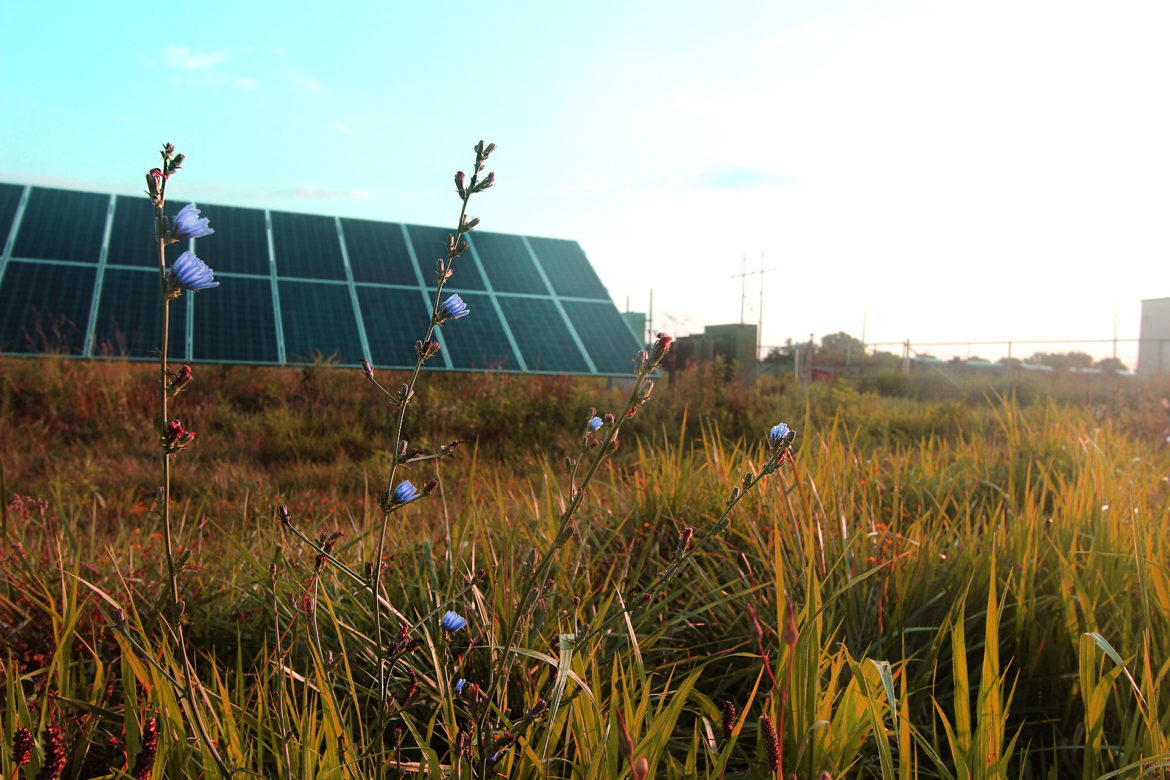 The state’s Department of Environmental Quality is unveiling the pollinator-friendly solar kit to guide plant choices.

As bee and bird populations continue to plummet, advocates and state officials in Virginia are gradually convincing solar developers to do their part for biological diversity.

Solar developers are open to the concept of arrays that incorporate pollinator-friendly habitats. However, they are often unsure how to execute a practice traditionally tied more to botany than their area of expertise: building on-the-ground projects.

The voluntary program, called Virginia Pollinator Smart, has been a year in the making. Pieces of the kit will be posted here and here as the final drafts are released.

Enter the state’s Department of Environmental Quality. The regulatory agency is on the verge of rolling out a how-to toolkit crafted for solar installers intent on greening the footprint of their arrays by foregoing fescue grasses for native vegetation.

The department oversees the permitting of Virginia solar facilities at or under 150 megawatts. The Pollinator Smart team the agency pulled together also included representatives from the state Department of Conservation and Recreation, as well as a bevy of subcontractors under the lead of Vanasse Hangen Brustlin Inc.

“We certainly are moving in the direction of renewables, which we support,” said team member Rene Hypes, environmental review coordinator with the Department of Conservation and Recreation’s Natural Heritage Program. “Now we have an opportunity to help bees, butterflies and other pollinators on thousands of acres. This is about showing how panels can be even more productive.”

Seven years ago, the Department of Environmental Quality developed what’s called a “permit by rule” regulation to facilitate the review of small solar projects proposed in Virginia. Only one such permit was issued in 2015. That number has grown to six in 2016, 10 in 2017 and 14 in 2018. Eight permits have been issued thus far this year and the agency is now reviewing six other applications.

Robin Ernst heads up Ernst Pollinator Service, a division of Meadville Land Services in the northwestern Pennsylvania community of Cochranton. She was an integral part of the Pollinator Smart team.

Recently, the 45-year-old has begun applying her decades of experience seeding meadows and capped landfills with native vegetation to large solar arrays in Maryland, Pennsylvania and the District of Columbia. She wants to expand her reach into more states.

“This isn’t one-size-fits-all work because every array is different,” Ernst said about dealing with varying factors such as soil conditions and the height of solar panels.

She praised Virginia Department of Environmental Quality officials for joining states such as Minnesota and Massachusetts at the forefront of the pollinator-solar nexus.

“I give the commonwealth kudos for offering this guidance and trying to do the right thing,” Ernst said. “It’s very exciting to be involved and to be able to share my knowledge to see that this is done correctly.”

What’s in the toolkit

Virginia’s toolkit rollout highlights at least one new feature and several upgraded elements. For instance, the team ramped up the previous iterations of its native plant finder and its compliance scorecard.

“What we had on the website before was the 1.0 version,” said Hypes, who has worked at Natural Heritage for 20 years. “We wanted these resources to be enhanced and based in science.”

The plant finder plugs into a more sophisticated database that shows solar developers which native vegetation will thrive in distinct regions such as the coastal plain, the piedmont and the mountains. Developers also can learn how tall specific species will grow and whether they prefer sunlight, shade, dry soil or wet soil. And, perhaps most crucially, they can discover where plants and seeds are available commercially.

“Planting native species gives any solar facility an ecological lift,” Hypes said. “They’re well adapted to survive in local environmental conditions, they improve the soil and they reduce erosion and runoff because their roots can grow two to four feet deep.”

Native species also provide food and cover for grasshopper sparrows, eastern meadowlarks, bobwhite quails, bobolinks and other ground- and low-nesting birds in Virginia. The Natural Heritage Program tracks bobolinks because they are considered a state rare bird during the breeding season.

Likewise, the scorecard has been updated to be more Virginia-specific.

Developers can earn eco-points in a broad number of categories including management of invasive species, use of herbicides and whether their plantings are blooming throughout the entire growing season. One scorecard covers new solar construction, while a second version is designed for existing solar facilities being retrofitted with native species.

“We had a very generic scorecard that we put together about 18 months ago by drawing on what other states had done,” Hypes said. “We wanted feedback to make it unique to the climate and diversity of Virginia.”

The agency has not yet decided who will be responsible for long-term monitoring of sites to make sure they maintain their pollinator-friendly status, she said.

One new piece of guidance the team developed is a comprehensive manual covering every aspect of site upkeep. It delves into the specifics of reseeding an area that isn’t thriving, preparing healthy soil and removing invasive species.

“We had a lot of questions on that front,” Hypes said. “We hope solar developers see this as the next level of being green and renewable.”

Fescue, a lawn staple across America, is the go-to grass for solar farm developers because it’s perceived as inexpensive and hardy.

However, Hypes and Ernst emphasized, acres and acres of one type of less-than-desirable vegetation is part of why 40% of the world’s insect species are in decline, according to a February 2019 study. Climate change, habitat fragmentation, pesticides, urbanization, invasive plant species, and pests and pathogens are other contributing factors.

Ernst pointed out that fescue mixes might seem like a cheaper choice, but developers usually don’t account for the expense of regular mowing and fertilizing, never mind replacing solar panels damaged by rocks spit out by lawnmowers.

“Yes, it does take two to three years to establish a landscape of native pollinator plants, but after three to five years the maintenance is down to nil because the plants have matured and choked out the invasive species,” she said.

Solar developers often gripe about native plants being more costly than fescue mix. But science and math reveal that they have to devote 200 to 400 pounds of fescue to seed an acre that would need only 12 to 15 pounds of native plant seeds.

“Plus, it’s about aesthetics,” Hypes said. “Looking at a habitat that blossoms throughout the growing season is much more palatable than looking at fescue or gravel.”

Ernst is a fount of seed knowledge. She has access to roughly 8,000 acres of native plants — mostly in Pennsylvania — that serve as the source for her company’s seed bank.

“This is my passion,” she said about restoring native species. “Why should the solar industry not have to give back? It’s mitigation.”

“Time is precious. I want to see action,” she said, adding that she is hopeful her future grandchildren will be able to say, “Look, there goes a monarch.”

Now that the Smart Pollinator toolkit is near completion, Hypes and her team are eager to jumpstart a native plant industry in Virginia. It’s in the nascent stages. Ideally, a network of large and small farms would grow and harvest grasses and flowers to produce a full range of seeds to be processed in-state.

“That is our optimal goal,” she said, adding that a successful program in Arkansas could serve as a model. “Ideas are still being tossed around.”