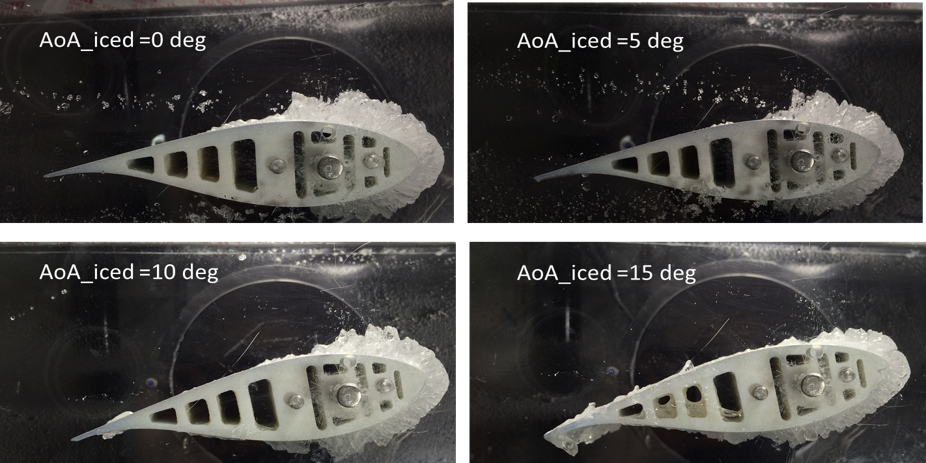 Wind turbine blade models are covered in ice after a 10-minute icing test at an Iowa State University research lab.

A state economic development grant is helping to fund an effort to find a cheaper and more effective ice repellent.

Researchers at Iowa State University are trying to develop a cost-effective antidote with the help of a $303,000 state economic development grant.

The stakes are real for the wind energy industry in Iowa and other cold weather states. Energy production can fall by as much as 50% when blades are icy, and operators sometimes turn turbines off during icy weather to prevent damage to the machines, according to Hui Hu, a professor of aerospace engineering at Iowa State who is leading the research effort there.

“Given our substantial wind resources … this has the potential to increase production, but to do it in an efficient and sustainable way,” said Brian Selinger, who directs the energy office for the Iowa Economic Development Authority.

Ice buildup can cause trouble in a couple of ways. Small irregularities in the blade’s surface are enough to seriously impair its aerodynamic performance. Turbine blades behave very much like airplane wings.

Hu watched it happen in his icing wind tunnel, a machine that can move air as fast as 220 miles per hour and chill it down to minus 13 degrees Fahrenheit while hurling supercold water droplets at anything inside. He also has a set of imaging systems that record in minute detail the deposition of water and ice on the blade cross sections. It clearly illustrates whether the ice is on the leading edge of the blade or farther back; how quickly it is building up; whether it is the finer ice known as rime or the thicker, bumpier ice known as glace; and the impact of heating the leading edge or of coating the blade surface with an ice-repelling compound.

He found that leaving the blade cross section, also known as an airfoil, in the tunnel to accumulate ice for up to 10 minutes reduced the lift — the force that propels the blade — by as much as 90%, and increased drag — the opposing force — by a factor of up to 4.5 times.

Ice can also cause problems because it doesn’t necessarily adhere uniformly on the three blades. Hu said the random buildup of ice can lead to an imbalance that can damage the gear system if the turbine continues spinning.

Solutions are available, but all have their drawbacks. U.S. wind farms generally turn to a helicopter or drone to spray a de-icing compound on their turbines, similar to what’s done to airplanes before takeoff. But like sunscreen, it requires frequent reapplication.

“It is quite troublesome,” Hu said, “because every time you do it, it costs quite a lot.”

Technologies exist that can be built into the turbine. Although they are used in Canada, Denmark and Sweden, Hu said the U.S. wind industry has found them to be cost-prohibitive. Charles Godreau, who researches wind turbine performance in cold weather for Nergica, an applied-research center in Québec, Canada, said the blades can incorporate a material that conducts electricity that can prevent icing by warming the blade. He said the cost for the power amounts to roughly 5% of the energy a turbine might typically produce.

Blowing warm air into the empty interior of a turbine blade also can work, according to Godreau.

Engineers also have tried to devise coatings that would repel ice. Oil works, Hu said, but it doesn’t stay on the blade’s surface long enough to be feasible.

Other formulas also work, at least for a time, but Godreau said the coatings tend not to be durable enough due to the speed at which turbine blades spin. The tip, which has to cover a lot of ground, often is moving at 200 miles per hour, he said, which subjects a coating to a lot of abuse from air and precipitation.

Hu’s team is trying to formulate new ice-repelling coatings. Some textured materials work initially, Hu said, but soon wear off. His team is taking some cues from nature, like the spikey surfaces of lotus leaves and penguin feathers. They also are intrigued by an oily compound on the surface of the leaves of the carnivorous pitcher plant, he said.

But in regions with less frequent ice conditions — like the Midwest — coatings and blade-warming systems don’t make economic sense just yet. Professor Hu hopes his research may change that.