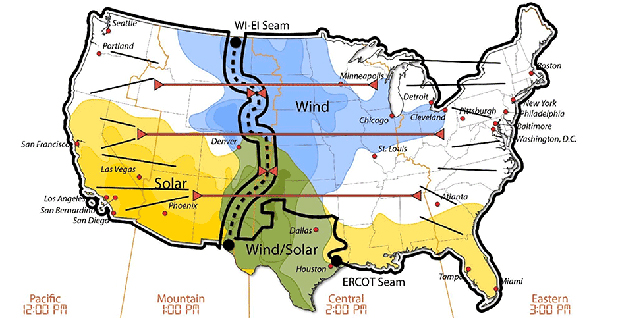 This Energy Department map shows how new long-distance power lines allow surplus wind and solar power to be shared across the United States.

A coast-to-coast transmission “super-grid” could be built across the United States for $80 billion and deliver economic gains of more than twice that amount, moving surplus renewable energy to major urban centers, according to an Energy Department national laboratory study that was pulled back by DOE headquarters, which called for more work on the findings.

James McCalley, a senior Iowa State University engineering professor and a principal author of the National Renewable Energy Laboratory study, said he is doing new analysis requested by DOE and expects to be done next year. DOE said the final report may not be released until 2022.

“My expectation is that [the additional analysis] probably will not change the basic thrust of our conclusions: High-capacity interregional transmission lines, particularly connecting the eastern and western grid compounds, have significant benefits,” McCalley said in an interview with E&E News.

The fate of the $1.5 million, two-year study has concerned researchers and at least one member of Congress, after parts of it were released over the past three years. It used computer models to investigate future scenarios for the U.S. grid out to 2038. The most significant analysis considered linking the two primary high-voltage grid networks, now divided by the Rocky Mountains.

“The study has been finished for a while,” grid analyst Christopher Clack told a transmission conference last week. Clack, CEO of Vibrant Clean Energy LLC, a Boulder, Colo., power grid modeling firm, added, “I feel like it makes uncomfortable reading” for some at DOE, with its scenario for moving renewable power across the four U.S. time zones to take advantage of peak output (Energywire, Oct. 25).

McCalley said anyone interested in the study can listen to Aaron Bloom, the project’s lead architect, describing it on video at the TransGrid-X 2030 Symposium in Ames, Iowa, in July 2018. “He gave a stellar presentation,” McCalley said. The symposium site has online details, as well, he said.

Asked about the study’s status last week, DOE said in a statement: “DOE officials reviewed preliminary results from the study and decided to expand the project to model and analyze additional scenarios. This includes refining methods and data parameters for improved modeling of transmission congestion within capacity planning tools and grid operations models. The improved characterization of congestion will model how this transmission expansion can contribute to reliability and resilience in the future grid.”

McCalley said his assignment was to do the additional analysis on one part of the report. Another piece has been completed and is going through final review.

He said he isn’t surprised if people read political consequences into the work but added that that’s not his department. “I am an engineering professor, not a political scientist,” he said. “We all have opinions. Sure, there’s politics involved. I’m sure there’s [something] political in everything that’s significant.”

A high-voltage direct-current overlay grid would make cheaper power more available in Georgia and Massachusetts, for example, he said. “The jobs that come with that stay in Oklahoma” or other wind power states, he said. “That’s a political issue. I’m just recognizing it.”

The study wasn’t commissioned as a hatchet job on coal-fired power generation, he said, although its key focus is on expanding access to renewable power resources that are forcing older coal plants into retirement.

“Are we ‘killing’ coal? Maybe we are, but that’s not the purpose over the overlay,” he said. Its purpose is to move energy and grid reliability services across the country in the most economical way. “If you [were] to build coal like crazy, it will facilitate that, too.”