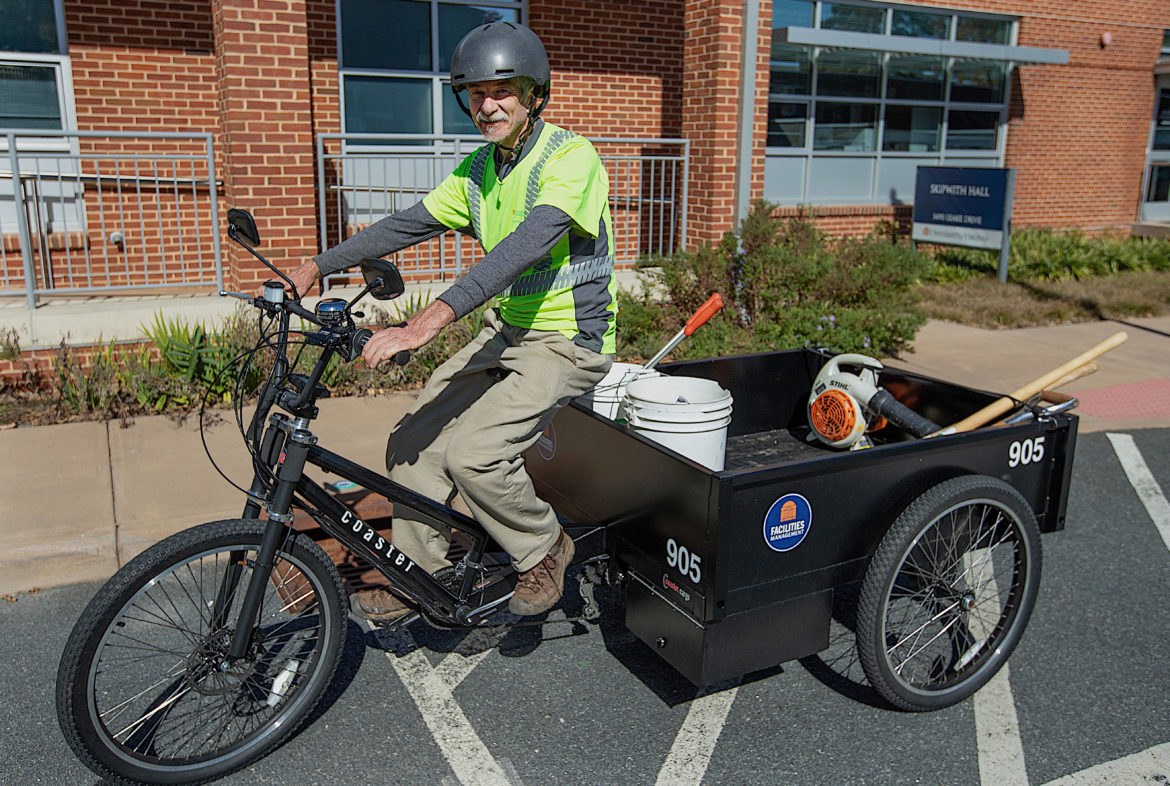 University of Virginia landscape gardeners are accustomed to motoring around the Charlottesville campus on diesel-powered utility vehicles.

Now, a cleaner and more nimble electric cargo bike means the workers’ transportation footprint can be as green as their thumbs.

Maintenance employees, landscapers, student interns and other staffers all have dibs on the three-wheeled e-bike. They’ve praised it for its maneuverability in tights spots as they go about their daily rituals of hauling flats of plants, loads of compost, tables, as well as leaf blowers, clippers, rakes and an array of other specialty tools.

“We perform tasks necessary to the operation of the university and are constantly looking for ways to increase efficiency,” said Duffy, who also oversees the department’s transportation operations. “What’s nice about the e-bike is that it’s narrower so it will go places that a motorized utility vehicle can’t.”

The first e-bike — a sturdy, steel-frame Coaster Transit 500 capable of carting roughly 600 pounds — arrived on campus in August. Duffy is evaluating its performance, with an eye on perhaps eventually replacing some of his fleet’s 50 utility vehicles with more e-bikes.

Roughly the size of golf carts, the diesel- and gas-powered utility vehicles are versatile enough to be outfitted seasonally with snow plows, salt spreaders and brooms. However, their price tag and greenhouse gas emissions are both higher than an e-bike.

Duffy has already calculated the potential savings. He spends about $18,000 on a utility vehicle. Operating a diesel-powered one for 40 miles costs $20 in fuel and emits 180 pounds of carbon.

In contrast, a Coaster Transit 500 starts at $4,195. It’s an additional $1,995 to outfit with one lithium ion battery and $695 for a second. Charging the batteries to travel 40 miles costs less than 30 cents and emits under 5 pounds of carbon.

The advantages of the e-bike align with the environmental plan the university launched in 2016 that includes a push to reduce emissions of heat-trapping gases by 25% below 2009 levels by 2025.

Duffy says the e-bike is an especially perfect fit for landscaping and other projects on what’s known as The Lawn. These central grounds are home to The Rotunda, the most iconic structure on the Charlottesville campus founded by Thomas Jefferson.

Jefferson modeled the building after the Pantheon, a second century temple in Rome, and designed it to be the architectural and academic heart of the university.

“It’s quiet and peaceful there,” Duffy said, which makes an e-bike more appropriate than “loud and polluting” diesel. “It’s kind of a sacred area.”

He became aware of the e-bike manufacturer — Missoula, Montana-based Coaster Cycles — while attending a green fleet conference in Harrisonburg, Virginia, earlier this year. After testing an on-site pedicab, he followed up with a query about a cargo e-bike.

Then, yet another Mike intervened. Mike Culver, chief marketing officer at Coaster Cycles, is a 2006 University of Virginia graduate who was eager to forge a partnership with his alma mater.

Coaster Cycles builds a range of three-wheeled e-bikes and pedicabs in a section of a million-square-foot lumber mill outside the college town of Missoula that has been repurposed as a manufacturing hub.

Ben Morris, the company’s chief executive, was focused solely on pedicabs when he founded the company in Boston in 2005. Initially, he was all about moving passengers on fleets of pedicabs purchased from a separate supplier. Less than a decade later, he had moved across the country helping his company design pedicab prototypes. His first sale came in 2014.

“We build industrial-grade equipment,” said Morris. “We pride ourselves on overengineering.”

His customers include scooter companies and a plethora of businesses. For instance, they have customized bikes for breweries, coffee shops, caterers and delivery services. He emphasized the importance of keeping manufacturing in the United States, especially during this rocky time of import duties and tariffs.

“The university footprint is really exciting because it’s like a city,” Morris said about the potential to expand on campus beyond Duffy’s department. “Having partners like the University of Virginia build some of these metrics will help us think about ways to design and improve our vehicles.”

At first, Morris was leery about jumping into the e-bike marketplace. That approach has changed as he has watched battery and motor technology evolve quickly. He now predicts that they will be dominant in the next three to five years.

Duffy is proud that his university was the first in the country to receive sustainable fleet accreditation for incorporating the use of electric and hybrid motor vehicles. It’s a program coordinated by CALSTART, a Pasadena-based nonprofit dedicated to developing clean, efficient transportation solutions.

He figures e-bikes will only enhance that pioneering certification.

Plus, he said, pedaling provides an extra bonus for employees’ hearts and lungs.

“Our workers are getting cardiovascular exercise,” Duffy said. “That’s a health benefit you don’t get while driving.”