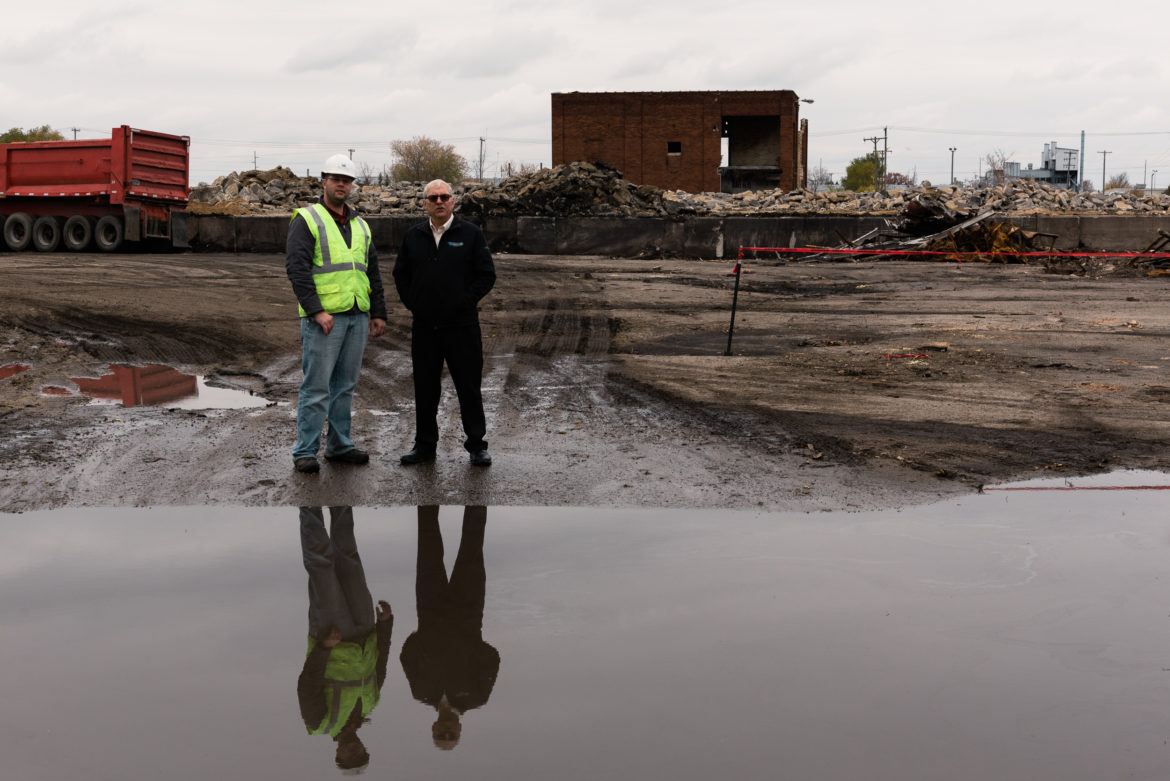 A solar project in Michigan’s northern Lower Peninsula is the first to use state grant funding to clean up contaminated industrial property.

The 500 kilowatt solar installation planned at a vacant eyesore is effectively a pilot project that Consumers Energy and state officials say could lead to more solar on contaminated land, also known as brownfields.

“We looked at this as a win-win opportunity for all parties involved,” said Rhonda Welcher, Consumers’ solar gardens project manager. “We’re looking at these sites around the state as a real model for what we can do in terms of development and making a positive impact. It’s our first foray into this area. We’re hoping it can be a model for future development.”

While “brownfield-to-brightfield” development — using sites like former industrial facilities, mines and landfills for solar — is a “no-brainer,” advocates say, the relatively new concept still faces potential cost barriers and a complicated development process. Despite the enthusiasm expressed by Consumers and state officials, no formal policy or dedicated funding for putting solar on these sites yet exists.

The solar project at the Mitchell-Bentley site in Cadillac triggered $1 million in state grants and loans through Michigan’s brownfield redevelopment program. The money was awarded to the city, which will pay off the loan portion through increased property tax revenue from future development on the site. The solar panels will be on the southern border of the property while city officials anticipate a new industrial tenant when the pollution is remediated.

Cleanup started in mid-October and is expected to finish this year while the panels will be installed next year. The city will be the largest off-taker of power, but any Consumers customers can buy output through its Solar Gardens program. The utility has two solar projects in western Michigan that are nearly fully subscribed.

State brownfield cleanup funds are largely contingent on development taking place at a site. Consumers plans to spend $700,000 to build the solar project, which was matched by a $700,000 state grant for cleanup.

“For us, this is huge to leverage that investment by Consumers,” said David Miller, president of the Cadillac Chamber of Commerce who also heads the Cadillac Industrial Fund to market industrial properties for reuse. “The solar component was critical for the state to release those funds.”

“If you can make the economics work, (solar on brownfields) seems to be a no-brainer,” said Sarah Mills, a senior project manager at the University of Michigan’s Center for Local, State and Urban Policy. “These are properties that are challenging to develop. If we can put them back to productive use, it seems to be a win-win-win.”

The roughly 13-acre site in Cadillac, population of about 10,000, has been vacant since an auto manufacturer closed in the late 1980s. Industrial uses for the property date back to the late 1800s. Six years ago, a fire at the facility resulted in a community eyesore less than a mile from downtown.

Miller said the property for years has “looked like ruins.”

Last year, though, a local utility first pitched the concept of solar on the property as a way to leverage state brownfield funding. Eric Baker, president and CEO of Wolverine Power Cooperative, is credited with the idea and proposing it to Consumers.

A source of groundwater contamination, the site has been overseen by state environmental officials since the early 2000s, said Julie Lowe, brownfield coordinator with the Michigan Department of Environment, Great Lakes and Energy. The state had funded site assessments and soil and water testing. Interest in the solar component triggered $700,000 in brownfield grants and $300,000 in loans.

“It’s been a very long, collaborative process,” Lowe said of the property.

This fiscal year, the state has $15 million available for brownfield remediation. $5 million of that is specifically for petroleum-based contamination. Each property is limited to up to $1 million in grants and $1 million in loans. Large brownfield grants are approved by a state administrative board, and projects must first show a “measurable economic benefit.”

While Consumers plans to build 6,000 MW of solar over the next two decades as part of its long-term clean energy plan, company officials have said they want to avoid development on greenfields when possible.

One of the first challenges for solar on brownfields is cost — specifically, who is going to pay what can amount to hundreds of thousands of dollars in environmental cleanup.

“As a company we do not want to assume responsibility for contamination from years past. We have to be careful of that,” Consumers’ Welcher said.

There’s also no uniform development plan for all brownfields. Sites can pose unique challenges based on location — such as a landfill — and type of contamination.

“It’s a unique business model to work on brownfields, not all of our members are going to do it,” said Laura Sherman, president of the Michigan Energy Innovation Business Council. “Some companies are averse to taking on the added liability.”

Sherman added that local taxes can also make it more costly to build solar in urban areas compared to rural.

“If the state or a municipality wants to encourage solar development on brownfields, I think the tax lever is one they can pull,” she said.

“They’re beginning to understand the advantages and potential of this kind of development,” he said. “We’re still in the early stages. I think it’s going to mature and become more prevalent.”

Kilmer and others say the challenges aren’t insurmountable. Just doing solar on a brownfield may not require as extensive a cleanup as residential housing, for example. Also, brownfields tend to be in populated areas that once hosted industrial facilities, meaning there tends to be an easy connection to the grid compared to rural projects. In some densely populated northeastern states where large tracts of land are at more of a premium, brownfields can be attractive, Kilmer said. Rhode Island, for example, has incentives for developing solar on brownfields.

“For some of these properties,” Kilmer said, “this is the best way to get them back on the tax rolls.”