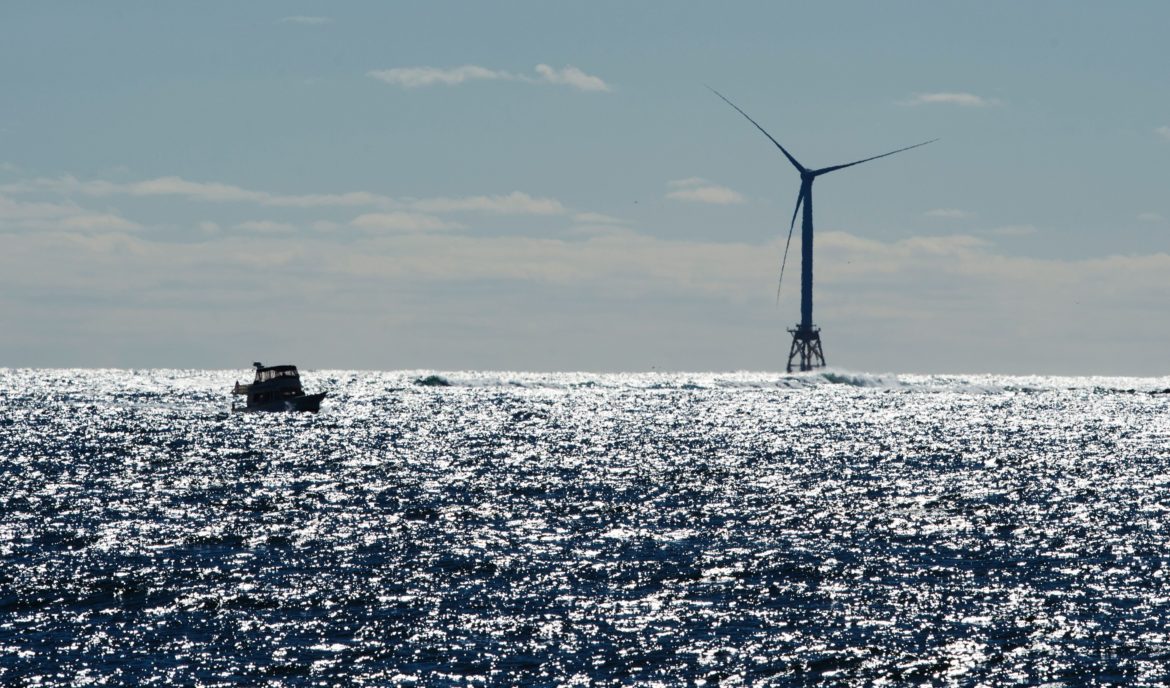 A boat passes one of the wind turbines of the Block Island Wind Farm in 2016.

An ongoing study of how the country’s first offshore wind farm is affecting recreational anglers so far points toward a fairly peaceful coexistence.

The Block Island Wind Farm, off the coast of Rhode Island, has become a popular fishing area, as many anglers believe the bases of the five, 6-megawatt wind turbines are acting as an artificial reef, said David Bidwell, an assistant professor of marine affairs at the University of Rhode Island (URI) and the principal investigator for the study.

“Anglers believe it has improved fishing in the areas very close to the turbines — there seem to be more species and more fish there,” he said.

The wind farm is also a popular attraction. People out on their boats for the day like to swing by the area just because it’s visually interesting, even if they’re fishing elsewhere, he said.

Participants in the study also expressed some reservations about the three-year-old project, which was developed about three miles off the island shoreline by Deepwater Wind. But by and large, recreational anglers said they like being able to fish so close to the turbines, a finding that might be instructive for the many other offshore wind projects in the pipeline.

“There’s been a lot of focus on the views of the commercial fishing side toward offshore wind,” Bidwell said. “But understanding how recreational anglers interact with this new industry is important because recreational fishing is important to the economy and quality of life in coastal communities.”

The research grew out of an earlier federally funded study by URI researchers into the effects of the wind farm on Rhode Island recreation and tourism. In focus groups conducted for that study, recreational anglers spoke positively about fishing conditions around the turbines.

For example, one focus group participant who was practiced in spearfishing, a diving sport, told researchers that the underwater support structure for the turbines was “loaded” with mussels and crustaceans, and was attracting scup, mahi-mahi and striped bass.

The subsequent angling study, funded by Rhode Island Sea Grant, began in the summer of 2018. It included one-on-one interviews with 19 anglers from in and around Rhode Island, and a survey of a random group of roughly 200 anglers who hold saltwater fishing permits. Respondents ranged from those who fish casually to big-game hunters.

The most positive comments came from those who had actually fished out at the wind farm, Bidwell said. Their perception is that the steel bases of the turbines, which have four legs with lattice-like supports between, have improved fishing conditions by creating structure, now encrusted with sea life, “in an area of the ocean where there wasn’t a lot of structure, and from the floor all the way to the ocean surface,” he said.

Those respondents who were less experienced at fishing said the wind farm and the increased boating activity around it provide an “instant landmark” for them to head towards, he said. And some just said the farm was an interesting place to visit.

“The wind turbines are a technological wonder and people want to see them and see how they work,” Bidwell said.

On the negative side, anglers said growing boat traffic around the turbines made it more difficult to navigate, and was potentially placing more pressure on the fisheries. They also expressed concern about whether access to the turbines would eventually be restricted.

“A lot of the positive attitudes are tied in with access,” Bidwell said.

Rich Hittinger, a recreational angler and 1st vice president of the Rhode Island Saltwater Anglers Association, which has about 7,500 members, said he has fished within a half mile of the turbines at least 50 times. The area was always a good fish habitat before the turbines went in, and remains so, he said.

“Our bottom-line impression is that those five turbines are not causing any kind of a negative effect,” he said. “And they may be causing a slight positive affect. For example, there are a lot of black sea bass around those turbine bases. I’m sure they’re there because the bases are totally encrusted with mussels and other small organisms.”

However, Hittinger emphasized that his organization has concerns about talk of using monopile foundations for future wind farms. These are cylindrical structures driven into the ocean floor.

A single cylinder would not be as good a habitat for the growth of marine organisms, Hittinger said. And the large diameter of the foundations — as wide as 30 feet in one design he’s seen — suggests that the protracted pile driving required for what will be many more turbines would be much more disruptive to sea life, he said.

“Five turbines is one thing, hundreds is something very different,” Hittinger said.

David Hochman operates a spearfishing charter company in Rhode Island and he says customers regularly request trips to the wind farm because “it’s loaded with fish. All the better divers want to hit that thing. It’s a fish magnet.”

As to whether there is any scientific evidence for the Block Island Wind Farm’s impact on fishing conditions, good or bad, “the answer right now is we just don’t know,” said Julia Livermore, supervising marine biologist for the state Department of Environmental Management’s Division of Marine Fisheries.

A trawl survey of the area required as a condition of approval for the project just wrapped up in September. The survey included monthly trawling of the wind farm site — dragging a net near the ocean floor — for two years prior to construction, the two years during construction, and three years since, Livermore said. The survey also included two control sites east and west of the area for comparison.

She has been examining the data, looking for changes in types and numbers of species present and their relative abundances to one another. But so far, “going through those data, I haven’t seen any changes to date that are statistically significant,” Livermore said.

It’s possible that the survey just didn’t pick up on some changes, she said. For example, black sea bass are very structure oriented, and if the trawl wasn’t close enough to the foundation structures, it wouldn’t pick up on the bass, she said. The trawl might also miss species that hang out higher up in the water.

“The hope was that the survey would help us tease some of these things out, but it may be too early to say,” she said, noting that research is continuing.