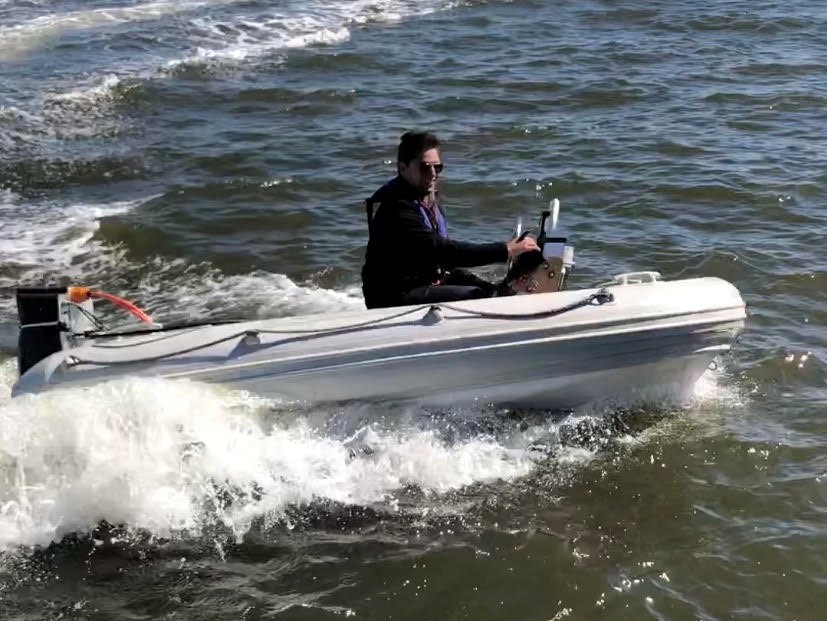 A Boston-based startup is developing an electric outboard motor that it hopes can help reduce the formidable carbon footprint from recreational boating.

Flux Marine is betting the performance of its product — cleaner, lighter and more powerful than existing options — will help it make an impact.

And some experts already see the potential: Flux Marine was recently awarded $10,000 as a winner of this year’s Cleantech Open Northeast, a business competition for entrepreneurs looking to tackle environmental challenges.

“This could change the face of the marine industry, which is super antiquated,” said the company’s chief financial officer, Daylin Frantin.

The company was born when the founding partners were still in college. Frantin and chief executive Ben Sorkin were childhood friends who spent many summers together on Lake George, in upstate New York, where boating was one of their favorite pastimes. One summer Sorkin realized that there had to be a way to make a better outboard motor, one that was quieter, required less maintenance, and didn’t leave a bad smell in the air.

Sorkin, then an undergraduate at Princeton University, made the search for a solution the focus of his last three years of college. At first, he didn’t see electric engines as the obvious answer, focusing instead on hydrogen fuel cell technology. But then an internship at electric car innovator Tesla inspired him to focus on electric batteries.

“We knew batteries were the answer then because of how quickly they were progressing,” Frantin said.

There are several electric outboards already on the market. Traditionally, electric motors have been low on horsepower because batteries big enough to create more power would be unmanageable for a boat. Therefore, most currently available electric outboards are used for applications that don’t require much speed or power: leisurely jaunts on the lake or riding a dinghy in from a mooring, for example, according to Charles Fort, associate editor of BoatUS Magazine, the publication of recreational boating membership organization BoatUS.

“All you hear is the sound of the water on the boat and you’re more in tune with the wildlife around you,” he said. “It’s a great feeling.”

Flux Marine intends to expand the possibilities of electric outboards by using advanced battery technology to create a motor that generates more power at a lower weight. Only recently, Frantin said, has the technology reached a place where smaller batteries can generate the horsepower necessary for a broader range of boating needs.

Users will be able to charge their motors in a standard outlet, either dockside at the marina or using a home outdoor outlet. Later iterations could also be equipped to be charged by small, onboard solar panels, Frantin said.

The environmental case for electric motors is strong. As of 2014, recreational boaters in the United States used 1.6 billion gallons of gasoline annually, according to the Federal Highway Administration. Though this is only around 1% of total gasoline consumption in the country, outboard engines are far less efficient than car engines and often get 10 miles per gallon or fewer. Motors sold before 2006, when new federal standards went into effect, are often even dirtier.

“They tend to pollute substantially more than the family car,” said Fort, of BoatUS Magazine.

And there are reasons to believe recreational boaters are ready to embrace a new electric outboard motor. While boaters used to prefer inboard motors, outboards have become the top choice in recent years, Fort said. Market research firm Industry Research forecasts the market for electric outboard motors will grow at an annual rate of 11.1%, hitting $120 million by 2024.

Furthermore, boaters tend to be environmentally conscious, Frantin said. He is not sure whether concern about pollution alone is enough to drive a sale, but the sustainable cred of an electric motor is certainly part of Flux Marine’s appeal, he said.

Pricing will be a significant challenge for any electric motor looking to break into the market, Fort said. In general, electric motors cost thousands more than their gas-powered counterparts. Flux Marine had not settled on a final price yet, but expects the number to be competitive, Frantin said.

Later this month, the team will travel to Los Angeles to compete against other regional winners for the Cleantech Open national grand prize.

Flux Marine has so far raised $150,000 and is now on its fourth prototype. The Flux team is in talks right now with interested investors and hope within the next six months to secure funding that will allow them to launch beta testing within six months. They hope to deliver motors to their first customers next summer.