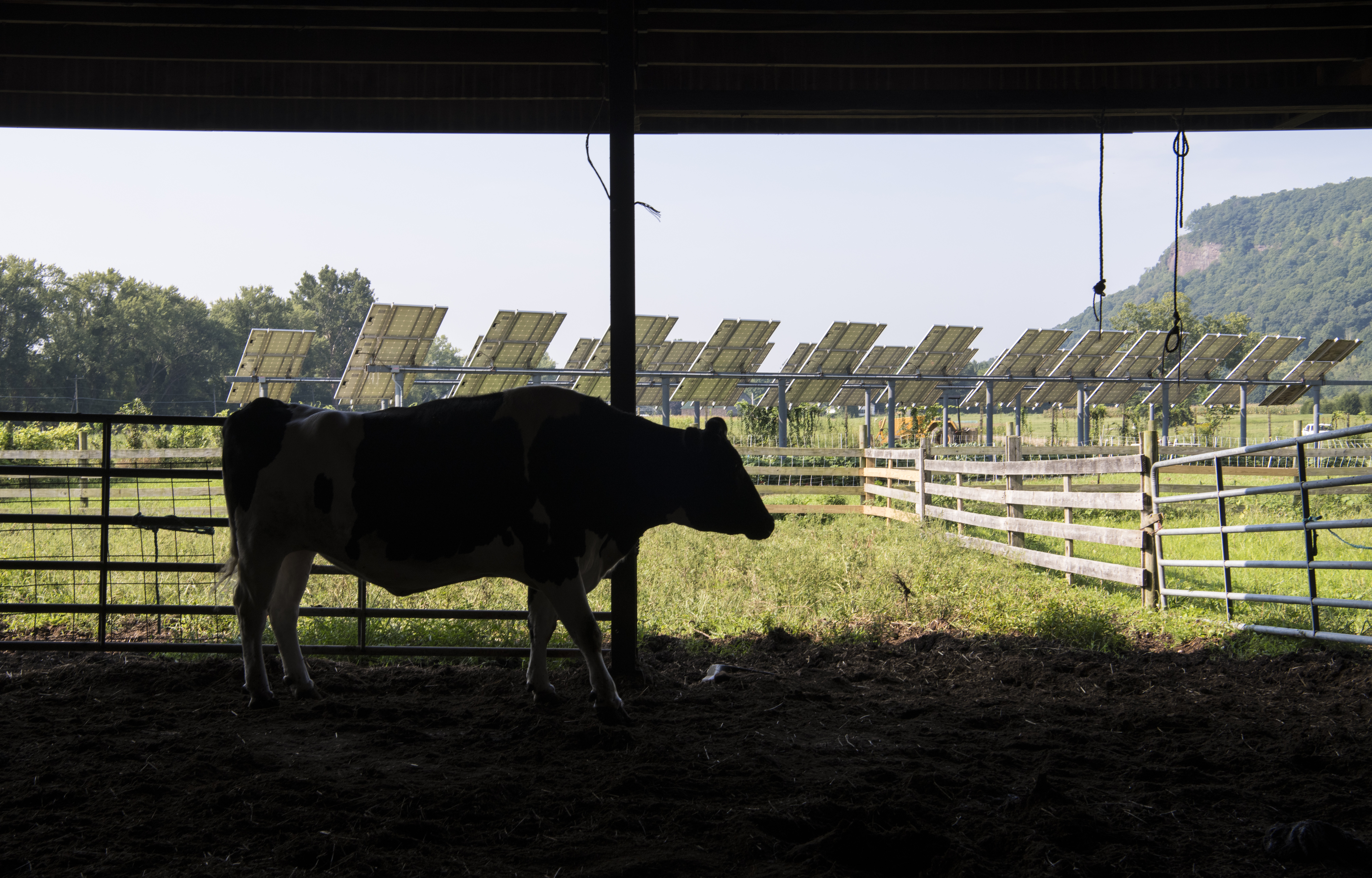 In 2008, J. David Marley, an engineer who owned a construction firm in Amherst, Mass., had an idea. He had just finished building a large solar array on the rooftop of his downtown office building.

The labor and effort to put it up there, he had learned, was much more expensive than if he had built the solar array on the ground.

In heavily populated Massachusetts, farmland is relatively rare and only 10% of its food is homegrown. If he had put his solar arrays in a farm field, Marley wondered, what would they do to food production?

After more than a decade of experimentation, a study written last month by 11 scientists has given us an answer. In many cases, farmers and the nation’s future food supplies will benefit from having solar arrays in their fields, especially as climate change introduces more drought and searing temperatures to agricultural areas.

The conventional way of installing solar arrays, the study found, tends to magnify heat. The arrays often sit over a bed of white gravel that stifles vegetation and reflects sunlight back up to the array. That increases its temperature and can reduce electricity production between 1% and 3%.

The study noted that grazing animals and many vegetable crops can benefit from the partial shade underneath solar arrays. Plus, the resulting stream of renewable electricity amounts to another crop, giving farmers more income and reducing the nation’s emissions from fossil fuel-fired electricity.

The National Renewable Energy Laboratory (NREL), part of the Department of Energy, has supported multiple solar-farming experiments. It said in a recent statement that the co-location of solar arrays “could offer win-win” outcomes across many agricultural sectors.

Last month, NREL helped publicize the study that appeared in Nature Sustainability under the ponderous name “agrivoltaic systems.” It is the concept of putting solar arrays in active farm fields. It found that the arrays “impacted every aspect of plant activity” with three different food crops, usually for the better. The study predicted the future savings of water used to irrigate dry Arizona farmland, where the authors of the study tested them against conventionally grown crops, would be “substantial.”

Jordan Macknick, an NREL researcher who has tracked the agency’s agrivoltaic studies since they began in 2010, said there are 25 experiments in far-flung parts of the U.S. They include grazing animals in Colorado and growing tomatoes, potatoes and melons without irrigation in Oregon. Others include raising bees around flowers sheltered by solar arrays in Minnesota and placing solar arrays over cranberry bogs in Massachusetts.

“Our guess is that by 2030 there will be about 3 million acres of land in the U.S. with solar panels on them” for combined agricultural and energy production purposes, Macknick explained.

There had been experiments as far back as the early 1980s in Germany, France and Japan. They hinted at the beneficial marriage between solar arrays and farming, but when he started his experiments at Amherst in 2008, Marley knew nothing about them.

But he was sure that conventional solar arrays would have to be redesigned to introduce them to farmers. The reflective gravel would have to be removed along with traditional concrete foundations and steel pipes. While conventional arrays sat low over the ground, Marley wanted to raise them to a minimum of 7 feet. That would provide enough room for animals to graze, while allowing tractors to work the crops planted on the bare land underneath.

Anne Marley once said this about her husband: He was a man with a plan and in a hurry to do something about climate change. “He believed we are late,” she said. “We are behind, and rather than waiting for the government to do it, we have got to make it happen.”

J. David Marley formed a company, Hyperion Systems LLC, and developed a partnership with the University of Massachusetts, Amherst, from which he graduated, to build a test site in 2009. He envisioned arrays that could be built on structures of wooden poles that could be removed if farmers wanted to plant something else.

The arrays reached as high as 15 feet to make room for farming and to let rain and snow flow off. Stephen Herbert, an agronomist at the university, helped determine optimal spacing between panels so enough sunlight would reach the ground.

“This came out of the blue,” recalled Herbert. The favorable economics of combining solar arrays with pastures for grazing cattle and sheep was, as he put it, “a no-brainer.” The pasture, the farm animals and the electricity output all benefited.

Marley, who later patented the designs and won a $1.5 million grant from the Department of Education to teach technical school students new uses for solar photovoltaic systems, died in 2013. Herbert keeps the tradition going in his agronomy classes, explaining how the experiments led to a variety of vegetables — including kale, swiss chard, lettuce, beans, broccoli and peppers — and renewable electricity growing profitably together on various plots in Massachusetts.

As Herbert explains it, governments will have to get more involved and make decisions on how to use the new system, otherwise a warming climate will force farmers to take “land out of productivity while we’re getting more people who are going to be hungry.”

“I tell the young people it’s your future, not so much mine. They will have to take the policy issues to heart,” he said.

Governments certainly have gotten more involved. Since 2017 the Massachusetts departments of Energy Resources and Agricultural Resources have been wrestling with a grant program that encourages farmers to try renewable energy. At the same time, the program attempts to restrict companies that sell arrays and solar energy from taking over too much farmland.

In 2017, Massachusetts set a goal of reaching 1,600 megawatts of solar power by 2020, but it imposed a limit intended to protect farmland. Fifty percent of a farm’s land had to remain exposed to sunlight. Now the state is planning to add 800 MW, and it is weighing a proposal to give farmers a lower rate for their electricity if they continue to expand the area covered by arrays.

More farmers want to get in the program, and some solar industry advocates are pushing for 4,800 MW. They want more access to farmland to bring a higher percentage of renewable energy to nearby communities. Herbert thinks the ratio of farmland without solar arrays could dip slightly below 50% and still make economic sense for farmers. Beyond that, he thinks existing farmland should be preserved for traditional crops and not on raising more electricity.

At the moment the program is on hold as the state drafts new regulations; they’re supposed to be released in February.

Meanwhile, interest in agrivoltaic farming continues to spread. The DOE program retained Marley’s company, Hyperion, as a partner in 2015 and is planning to establish a new experimental site in Puerto Rico. The land is being used to raise cattle and grow coffee.

An adviser on that project will be Jake Marley, David Marley’s son and the new manager of Hyperion. He said that the DOE program, called InSPIRE for “innovative site preparation and impact reductions on the environment,” reflects his father’s conservative approach to using farmland. “His primary focus was not taking the land out of production,” Jake Marley said. “He believed in food first, energy second.”

The original idea was the product of two scientists in Germany in 1981. They produced a paper called “Kartoffeln Unterm Kollektor” (“Potatoes Under Panels”) that first showed how the economics of farming with solar arrays might work.

The idea has spread around the world, and Macknick, the NREL researcher, said it will yield more innovations, including some by companies in India that plan to hang solar arrays over irrigation canals to make electricity and lower the evaporation of precious irrigation water at the same time.

He says more innovation is underway in the U.S., where companies are thinking about using translucent solar arrays to let in more sunlight and building solar-electric greenhouses to combine power and plant production. “Solar powered” tomatoes and honey are being hawked in farmers markets.

The experimentation goes on. “There will be huge appetites for this in small countries or those that don’t have a lot of available farmland,” said Macknick. “There you’re going to see a lot of food versus energy conflicts, and there are ways that you can help minimize those.”

“But there are still a lot of open questions on how to grow this right,” he added.