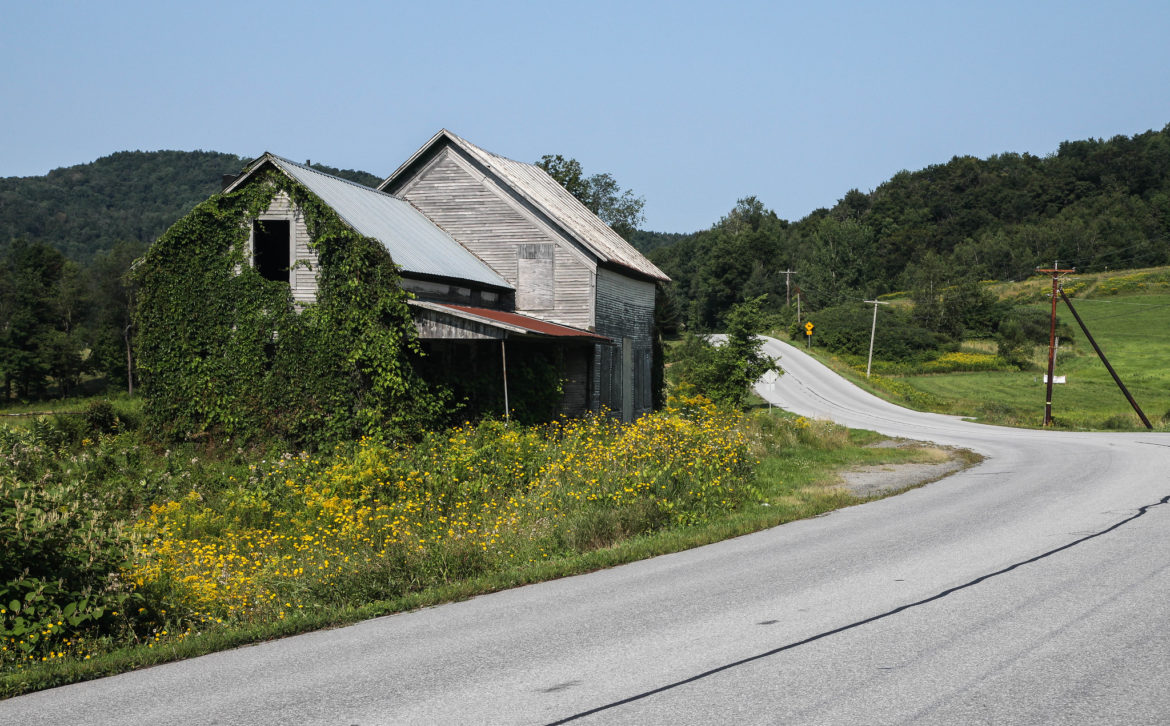 A road winds past an abandoned house in rural northern Vermont.

Advocates say the Transportation Climate Initiative can — and must — spread benefits to less populated areas.

As Northeastern states finalize a plan to reduce carbon emissions from vehicles, advocates hope they will keep rural transportation concerns in the forefront.

Nearly a year ago, nine states and Washington D.C. formed the Transportation and Climate Initiative — a coalition that has been exploring how to create a regional cap-and-invest system to lower vehicle emissions. The group has convened a series of public workshops and discussions, attracting more than 1,000 attendees, to examine how to design the program.

“We have different demographics, in different places,” said Peter Walke, deputy secretary of the Vermont Agency of Natural Resources. “But those meetings have really been driven by the urban conversation.”

While improving transportation in and around cities is “incredibly important,” he said, it’s also crucial for rural places, such as Vermont, to think about “what the program may cost, and how we might use some of the revenue from it to address broader issues.”

In December, the coalition intends to release a draft policy proposal, which will include estimates and modeling of the potential costs and benefits of various ways the program could be designed.

If implemented, it would likely function for most people as a gas tax. Wholesale fuel suppliers would have to pay for allowances for their emissions, which would be capped. They’d pass those costs along to consumers at the pump. States could then invest the money they raise from selling the allowances into building cleaner transportation options, such as new electric vehicle chargers or improved public transit systems.

In a draft policy framework released in October, states listed “equity” as their top priority. Members of the initiative “recognize that these inequities apply to urban, rural, and suburban communities in different ways,” the authors wrote, “and particularly to low-income communities, communities of color and communities with limited mobility options.”

Walke has been leading the Transportation and Climate Initiative discussion for Vermont and recently helped organize a symposium at Vermont Law School to discuss ways the program could help address rural transportation challenges. He said that after decades of being disproportionately impacted, environmental justice communities in urban areas “have organized well and can speak meaningfully in these conversations. But that doesn’t really exist for our rural populations.”

Although none of the states involved have committed to implementing the policy yet, Bruce Ho, a senior advocate for the Natural Resources Defence Council’s Climate and Clean Energy program, pointed out that except for Washington D.C., all the jurisdictions include rural areas.

“So this isn’t a question of only some states focusing on these issues,” he said.

There are many ways to invest the money that would be generated by the program to strengthen rural communities, according to Joanne Troutman, director of the Greater Susquehanna Valley United Way, a nonprofit serving rural counties in central Pennsylvania.

“We have a low-interest car loan program across five counties. And I’ve thought a lot about how to use electric vehicles for that,” she said. “Not only do you think about electric vehicles being environmentally sustainable, but it’s often a much more economical way to travel. A lot of families have these gas-guzzling vehicles. We don’t have the charging infrastructure right now, but I don’t think it’s that’s far off.”

Safety is another big concern, and an area for investment, she said. Some rural residents walk long distances because they can’t afford to drive or have lost their licenses.

“I’ve got clients who walk 10 to 12 miles round trip to go to work,” Troutman said. “And they’re walking on the side of a busy highway. How do we make it safe?”

Fast internet is also a concern — it can help draw new investment and businesses and reduce the need for people to drive.

“Broadband is a huge issue for us. It’s the No. 1 issue our chamber of commerce is tackling,” Troutman said. “People want to live in this beautiful place, but they need to be connected.”

In Vermont, the desire to live in a rural place is putting pressure on some communities.

“More people want to move here,” Walke said, “but sometimes the town or village doesn’t have sufficient wastewater capacity. So newcomers end up buying [homes] on the outskirts of town where they put in a septic system, and then they end up driving more.”

He said rural residents in particular can be quite sensitive to cost-of-living changes, and he has “definitely heard a lot of pushback” to the Transportation and Climate Initiative.

“We look at the ‘total energy burden.’” Walke said. “So, what’s the cost of your energy, based on your income level? And our rural areas are almost always the most burdened. That’s primarily an income factor, but it’s also because they have to drive more. So it’s something we really pay attention to.”

He said his instructions from the governor at the beginning of the process were to “figure out, ‘What is the best possible version of this for Vermont?’ And then have a conversation about whether it makes sense.”

Walke added that, ideally, programs like the Transportation and Climate Initiative will help people switch to technologies that will save them money in the long run.

For her part, Troutman is hopeful Pennsylvania will get on board too.

“We’ve got great leadership in the state, but we do live in a very conservative community. There are key leadership locally who don’t believe transportation is an issue,” she said. “If [TCI] gets adopted, I’m really hopeful it will take that piece of the argument away, because it won’t necessarily be local tax dollars going into it. I always worry where politics will take this, but it’s the right thing to do.”