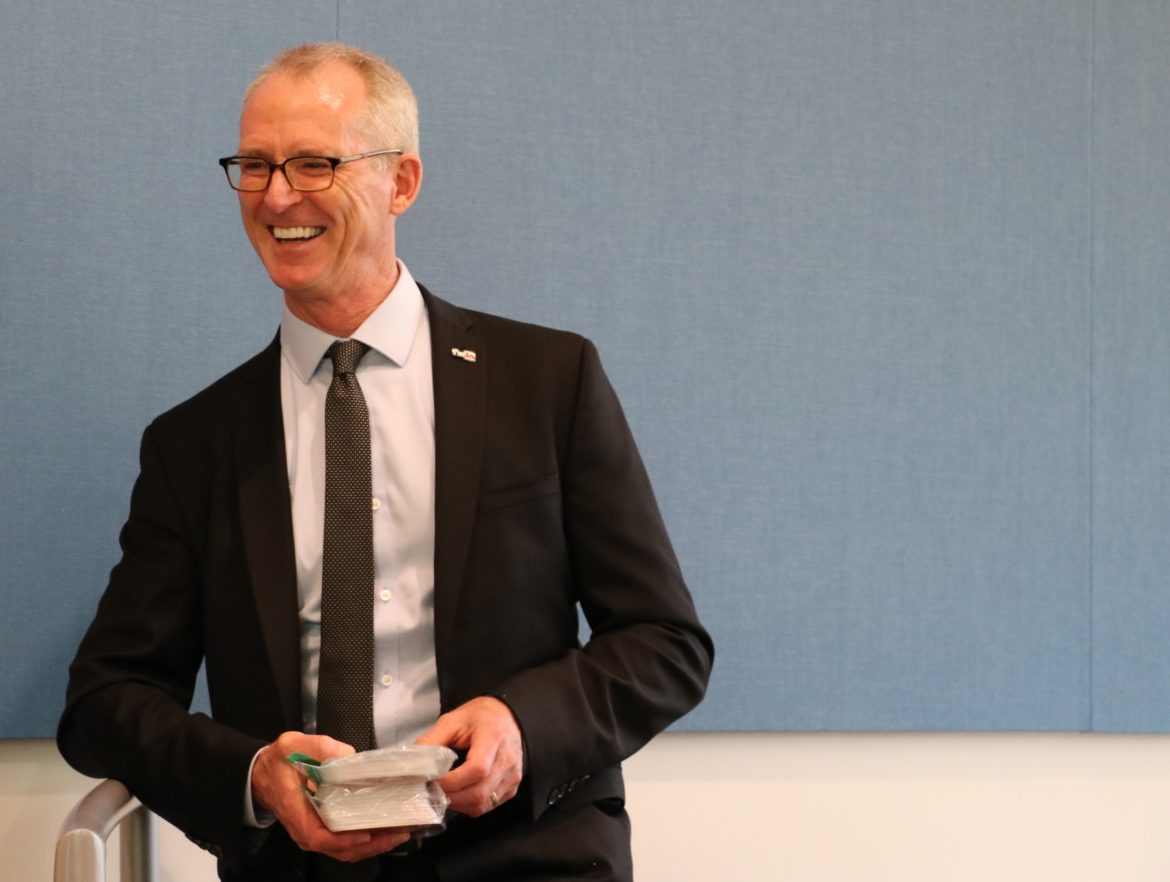 Former South Carolina Rep. Bob Inglis, a Republican who himself once denied the reality of climate change, believes his party's days of denial are ending.

The former South Carolina congressman said it began around 2010, when he was clobbered in his Republican primary by ultra-conservative Trey Gowdy.

“They were having a tea party,” Inglis joked to students and fellow alumni at a Duke University event this month. “I was specifically uninvited.”

But Inglis believes the GOP’s denial days are ending, and he points to North Carolina’s first-term U.S. senator as proof. “Thom Tillis is part of what we call the 14 seconds of disastrous disputation,” he said later in an interview.

Inglis vividly recounted a 2014 Republican Senate primary debate, when each of the four candidates, including Tillis, gave a flat “no” when asked if climate change was a fact. The conversation was over in a flash. “Fourteen seconds, and the North Carolina GOP is done with climate change,” he said.

Fast forward to August of last year and Tillis, up for reelection in 2020, went on record saying human-caused climate change was a reality, and that strategies were needed to address it.

The transformation gives Inglis hope. A one-time denier himself, he runs a nonprofit called RepublicEn, working to build a grassroots movement to get select congressional Republicans around the country not just to acknowledge the climate crisis — but to vote to mitigate it with a tax on carbon.

Success depends on emphasizing that dramatic cuts in carbon pollution can be achieved through “free market innovation,” Inglis said, “the most dynamic force for change on the planet.”

A ‘metamorphosis’ on climate denial

“Inglis 1.0” took place during the Clinton administration, when he cared little about climate action. “I didn’t know anything about it except Al Gore was for it,” he told the Duke crowd. He, therefore, was against it.

“Inglis 2.0” was the result of a “three-step metamorphosis.” First, he got a talking-to from his son, just turned 18, who insisted his father improve his environmental record to earn his vote in 2004. Second, he saw evidence of the climate crisis during his time on the House science committee. Third, he connected with an oceanographer on the other side of the globe with whom he shared deep Christian values.

But just as Inglis was beginning to come around to the idea of policy change to fight global warming, his party was swerving the other way. Former Republican House Speaker Newt Gingrich had joined Democratic speaker Nancy Pelosi in an April 2008 ad urging climate action; by September, he had helped convince Congress to lift a 25-year ban on offshore drilling.

Inglis didn’t vote for the cap on carbon pollution that passed the House in 2009. But he frequently spoke out against climate denial and introduced a bill with his preferred solution: a carbon tax. That — combined with a few other moderate positions — spelled the end of his congressional career.

‘We sure didn’t expect it from Idaho’

After his loss, Inglis formed RepublicEn to try to win over members of his party from outside the Beltway. He aims to persuade and activate 200 conservative voters in a set of target districts around the country. Mobilizing volunteers in those places should convert 25 Republicans in the House and 12 to 15 in the Senate, Inglis said. “And then we win.”

He approaches his goal like any seasoned retail politician, with a focus on how to find common ground with potential activists. Rather than start his conversation with voters in North and South Carolina about the local problem of rising sea levels and more intense storms, for instance, he first talks about free market tools to lower carbon emissions.

The reason for that approach is a theory put forward by a Duke University researcher: People won’t acknowledge a problem if they don’t support its assumed solution. To overcome this “solution aversion,” Inglis said, “first articulate the solution that fits with conservative values and free enterprise principles — then you can have a more productive conversation about the problem.”

RepublicEn’s target locales fall into three categories. There are purple districts held by Republicans in Michigan and New York. There are areas in Florida and the Carolinas where the impacts of climate catastrophe like rising seas are already being felt. “The third type of place is what I call head-turner states,” Inglis said. “That’s Utah, Idaho and Texas.”

Among all the target states, Inglis said, “North Carolina is odd for us.” His group isn’t targeting any representatives because the current districts are so gerrymandered, he said.

But he believes North Carolina’s two Republican senators are gettable. The state is still reeling from two major hurricanes in the span of two years. The economy has improved.

The Cook Political Report rates Tillis the country’s fourth most endangered Senate Repbulican, while Sen. Richard Burr is serving what he says is his last term.

“We’re very encouraged by Thom Tillis’s turn and willingness to engage in the competition of ideas on climate change,” Inglis said. “We hope the same for Richard Burr.”

Yet across the political spectrum, critics of the carbon tax abound. It’s generally unpopular with voters. Priced too low, it could burden low-income consumers and increase fossil fuel profits without speeding the adoption of renewable energy. And it may not be effective enough or fast enough, especially for cutting emissions from the transportation sector — the largest source of global warming pollution in the United States.

But he still thinks the policy must take top priority. “It may not be the only thing necessary, but it is the first thing,” Inglis said. He and other observers believe the conservative economist Milton Friedman, who died in 2006, would have endorsed a carbon tax. “It’s rock solid conservatism.”

Despite the trend of tribalism that has largely made addressing climate catastrophe a Democratic issue, at least in Congress, Inglis said young people give him hope. “They’ve grown up in a culture of collaboration,” he said, contrary to his generation’s “culture of compromise” that’s too often viewed as a zero-sum game. “If we could switch to [their] politics we’d be far better off,” he said. “The idea of ‘bring your best ideas, and I’ll bring my best ideas, and we’ll see if we can draw from both of them.’”

Asked what happens if President Donald Trump serves another term and continues to lead the party in ignoring the climate crisis, Inglis’s face fell. “It’s going to be very difficult if we do lose four more years,” he said. “We are seeing the whites of its eyes now. We’ve got to take a shot, because the thing is charging at us.”

Still, even if Trump wins in 2020, Inglis said, “I think there would be a pretty quick reevaluation in my party about the path to the future. Because I don’t think there’s a rerun of this reality TV show.”

But there’s no question RepublicEn’s strategy relies on a supportive president in the White House and large numbers of Democrats in Congress. “I’d love a thorough going conversion in my whole party, but we don’t have to have that to win,” Inglis said.

The plan is to persuade some three dozen congressional Republicans to support meaningful climate action by 2022, Inglis said. “Then we disband. Our job is done.”