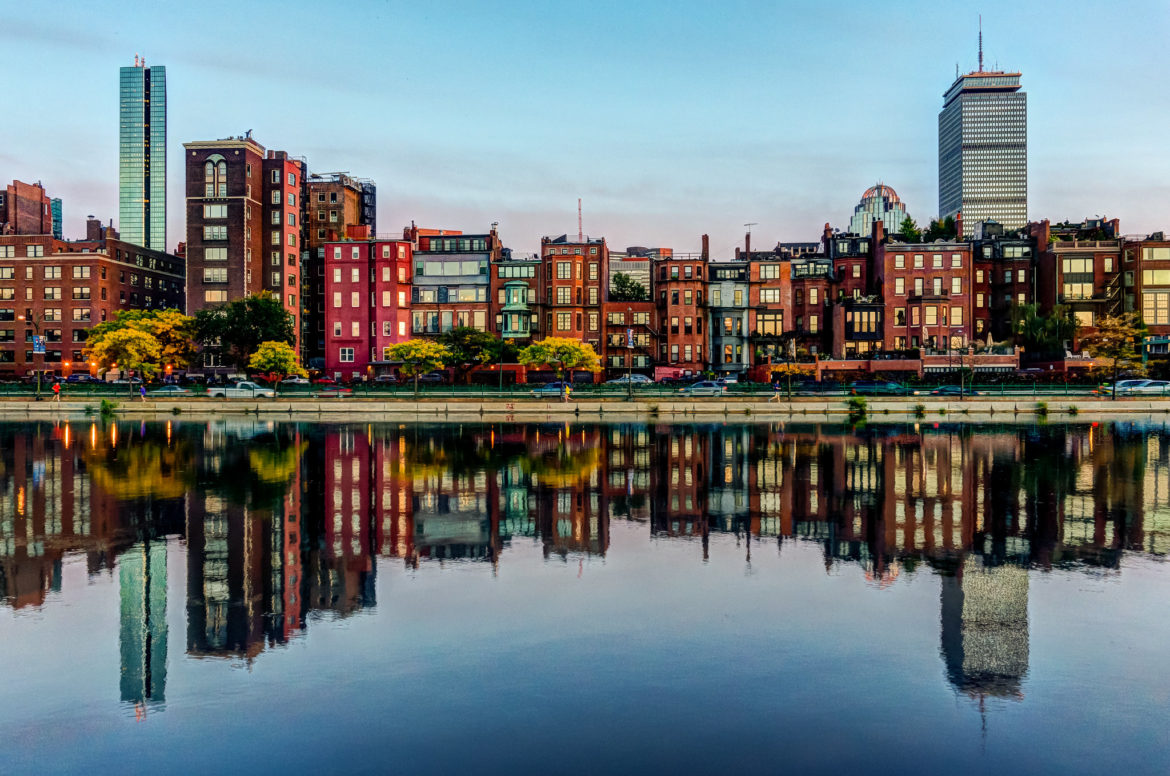 Boston's Back Bay. Massachusetts has nine times been named the most energy-efficient state in the country. Still, it has not yet embraced the potential of low-energy building in the same way Norway has.

Massachusetts is among the top states for energy efficiency, but its standards and ambitions still lag the Nordic country.

The newest office building on the waterfront in the central Norway city of Trondheim is stripped down and striking, with a polygonal roof angling up into the skyline. An elliptical atrium bores down through the center of the structure. The entire building is clad in black.

It takes a closer look to notice that the dark roof — some 32,000 square feet — is covered entirely in solar panels. The panels are expected to produce twice as much energy each year as the offices below will consume, a ratio that helps make Powerhouse Brattørkaia one of the growing crop of net-positive buildings in Norway.

“It’s about pushing the boundaries and pushing builders to think differently,” said Andreas Nygaard, senior architect at Snøhetta, the firm that designed the project. “Hopefully we’re able to create new ways of solving problems so people can incorporate this in new buildings.”

These calculations include not just the energy generated and consumed by building operations, but also the carbon emissions that go into the building materials and the pollution that will be created by the eventual demolition of the structure decades down the road.

The goal is to prove net-positive building is financially and logistically feasible, paving the way for other developers to consider these approaches.

“We need people that actually take that risk so we can show people that this works,” Nygaard said. “And then they can implement it in their building and then the ball will start rolling.”

Renewable energy and energy efficiency are topics of intense interest in Massachusetts as well. The state has nine times been named the most energy-efficient in the country by the American Council for an Energy-Efficient Economy, and its solar incentive program and offshore wind initiatives make it a leader in renewable energy. The state currently aims to cut carbon emissions 80% by 2050, but a bill pending in the state legislature would, if passed, require complete carbon neutrality in that same timeframe.

While building emissions are a major target for state initiatives, efforts to encourage or require carbon-neutral and net-positive construction are still in their early stages. Climate activists are pushing the state to adopt a net-zero stretch code, a building code that would allow individual municipalities to require new construction be carbon-neutral. Energy efficiency program administrator MassSave and the Massachusetts Clean Energy Center have incentive programs to promote the construction of multi-family homes built to passive house standards, an approach that calls for extremely energy-efficient design.

Still, the state has not yet embraced the potential of low-energy building in the same way Norway has.

“They’re proving it can be done,” said Aaron Gunderson, executive director of Passive House Massachusetts, a nonprofit dedicated to promoting adoption of the passive house standard. “We’re not quite to that level in this state or in this country. Where the challenge lies is getting people who are building those buildings to do something new.”

In Norway, efforts to develop carbon-neutral or net-positive buildings have significant momentum.

In 2014, Powerhouse’s first project was to retrofit two 1980s office buildings in the Oslo suburb of Kjørbo, making them energy-positive. The next year the coalition was commissioned to create a net-positive elementary school in the town of Drøbak, south of Oslo. Powerhouse Brattørkaia opened this summer and the group is also in the process of developing another net-positive office building outside the capital.

Another organization, FutureBuilt, is pursuing a similar mission, helping fund 52 projects intended to demonstrate the technologies and techniques that can be used to create buildings with very low net emissions or net-positive energy production. The organization has supported six net-positive projects, including the Powerhouse Kjørbo office building, two public kindergartens, and an 82-unit student housing development. A mixed-use building and a nursing and treatment center are also in the works.

The two initiatives employ a wide range of strategies — not all of them high-tech — to achieve their emissions-slashing results. Solar panels and geothermal wells provide renewable energy, and the use of cross-laminated timber instead of structural concrete reduces the carbon footprint of the building materials. Many of the projects are purposefully located near public transportation, reducing the emissions associated with traveling to and from the buildings.

Oslo leaders are creating a ‘car-free city center.’ Could Boston be next? »

Temperature control is one of the biggest challenges, though not in a way one might guess. Even in Norway — where winter temperatures routinely linger in the 20s or lower and some winter days see less than five hours of sunlight — cooling a building is much more energy-intensive than heating it, Nygaard said. Carefully placed, highly insulated windows allow the sun to warm up spaces and then keep the heat inside. Natural ventilation — often something as simple as strategically placed windows that can be opened and closed — helps release the heat as needed.

These conditions are actually an asset for demonstration projects such as those developed by Powerhouse and FutureBuilt, Nygaard said.

Though Powerhouse projects are in some ways idealistic, they must also deal with regulatory and financial realities. The design of the Brattørkaia offices was altered to meet Trondheim’s rules for maximum building height and the builders went through a long back-and-forth with fire officials to make sure the expansive solar array was considered safe, Nygaard said. And, as with any other office building, the budget has to work, he added.

You “have to show you can build it and the economy will also work,” he said. “This is not like a pro bono project.”

The Norwegian government has so far been a strong supporter of net-positive, net-zero, and passive house construction, said FutureBuilt general manage Birgit Rusten. Governmental funding has been “easy and predictable,” she said. Current codes require all new buildings to be designed to passive house standards.

However, it is not clear whether the government will make the mandate even more stringent by requiring net-zero or net-positive buildings, Rusten said. Nonetheless, she sees surging interest in these carbon-cutting approaches to building.

“There is a lot happening within construction now, and the most ambitious developers are working with projects for zero-emission and plus-energy,” she said. “There is a huge interest for this topic among architects.”

As net-positive building techniques gain traction, some are already expanding their thinking even further. The latest conversations about reducing energy use in the built environment revolve around integrating entire neighborhoods or clusters of buildings into an energy eco-system. The goal is for multiple buildings to share the power they generate, integrate energy storage, and incorporate sustainable transportation options.

“We’ve really gotten away from looking at the plus-energy building as just one building,” said Anna Barnwell, marketing manager for buildings and households at Enova, an independent agency, owned by the Norwegian government, that invests in emerging clean energy innovations and projects. “It has to be a really holistic approach to the neighborhood or district.”

In the United States, questions remain about whether the culture is as ready to accept these big changes in the way of approaching the business of construction. Developing highly efficient projects generally requires a close collaboration between developers, architects, builders, and contractors, right from the beginning of the planning process, Gunderson said. The traditional approach tends to be more linear, with developers initiating the process, then bringing architects and builders on board, then hiring on contractors as the project proceeds. Convincing people to upend their way of doing business is an ongoing challenge, Gunderson said.

There is also an essential difference of philosophy between the United States and Norway, said Andrew Lee, of the Living Future Institute. Norwegian citizens tend to be more trusting of their leaders and more likely to believe that government programs will provide for the general good. In the United States, people are more skeptical of government interventions and more motivated by capitalistic competition, Lee said.

Convincing the American construction industry to embrace extreme efficiency and net-positive building will likely require an appeal to its financial and competitive interests, he said.

“They care about sustaining their business for the next 50 years,” Lee said. “Market mechanisms work more effectively in North America than saying, ‘You have to do it.’”

In Norway, however, Nygaard is confident a transformation is underway and the net-positive achievements of Powerhouse Brattørkaia are just the beginning.

“In 20 years’ time, people will be looking back at Brattørkaia and saying, ‘We’ve come so much further,’” Nygaard said.