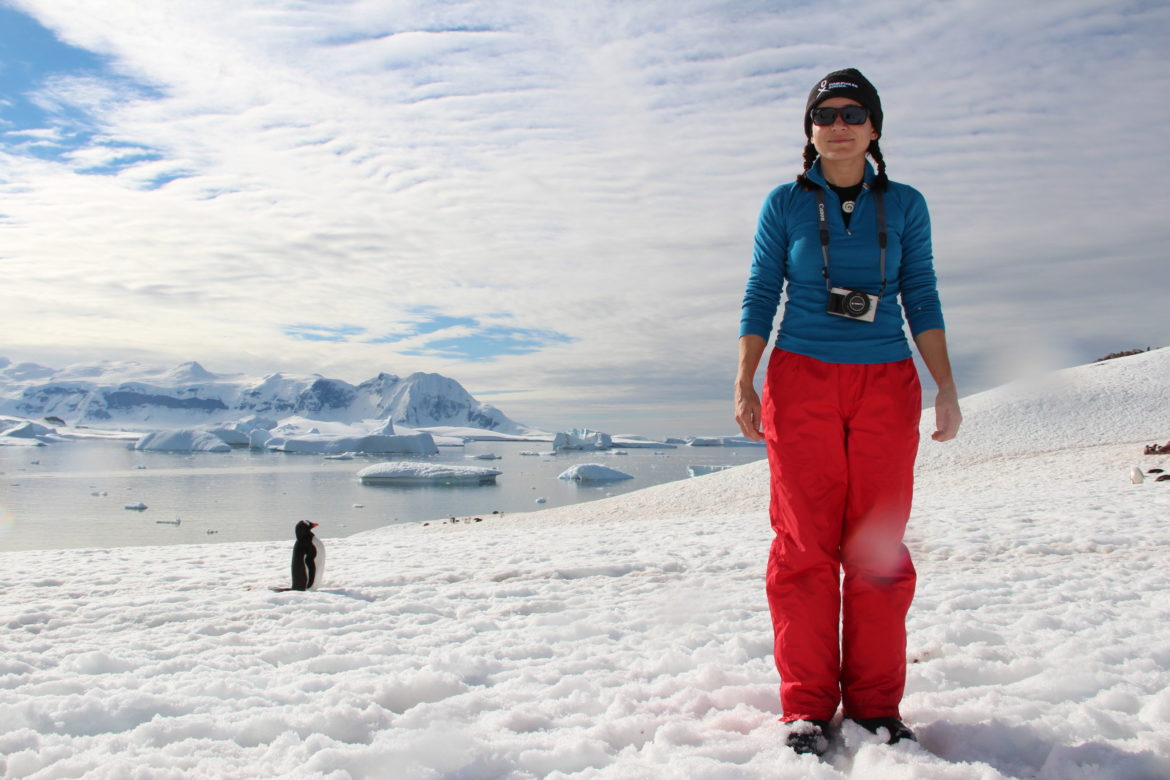 Katja Ovchinnikova of Heidelberg uses artificial intelligence to survey marine life. She was among 100 women this month who traveled to Antarctica as part of an initiative to bring more women in science, technology, engineering, math and medical fields to the frozen continent.

The expedition, which concluded Dec. 10, was the largest-ever delegation of women to the frozen continent.

Editor’s note: This story was reported with support by Acciona, a Spanish renewable energy company, which paid for the reporter’s travel expenses but had no editorial input or oversight. (See the Energy News Network Code of Ethics.)

Antarctica provided metaphors aplenty for the 100 women in science, technology, engineering, math and medical fields on the largest-ever all-women delegation to the frozen continent, which concluded Dec. 10.

The women came from around the world to this harsh yet fragile ecosystem focused on fighting climate change and other environmental threats. They also came to figure out transitions and overcome barriers in their own lives and careers.

They work in locales from the Great Barrier Reef to the Kenyan savanna; from small Pakistani farms to Outback sheep stations; from Chinese mega-cities to Canadian logging towns.

But they all found personal meaning in the glaciers, formed silently over the course of centuries, calving into the ocean with a thunderous crash. Or the massive icebergs bobbing in frigid waters, suddenly flipping as the sea melted their submerged undersides. Or the penguins and leopard seals cruising on floating ice, seemingly unconcerned where they would end up.

During the three-week voyage, the marine scientists, renewable energy engineers, epidemiologists, physicists and others talked about the anguish they felt upon giving up exotic field work to have kids. The frustration of putting out critical papers on climate change or plastic pollution only to have them ignored by policymakers. The pain of suffering sexual harassment or hitting a glass ceiling.

The trip was convened by the Australia-based global women’s leadership initiative Homeward Bound, which aims to bring 1,000 women in science, technology, engineering, math and medical (STEMM) fields to Antarctica over a decade. For a year leading up to the recent trip, the women went through leadership and strategy workshops and raised thousands of dollars for the expedition, which was also funded by the Spanish renewable energy company Acciona. About a dozen American women were on the trip, along with women from other countries who have studied or taught in the U.S.

Throughout the process, women talked about the transitions they have made or plan to make. A number of them quit prestigious jobs within the past year, and saw the leadership trainings and Antarctic voyage as part of reshaping their lives.

A German computer scientist working in molecular biology realized her true passion is marine conservation; now she’s using artificial intelligence to automatically identify undersea creatures. A French Australian who studies how phytoplankton contribute to low-lying clouds feels she could have more direct impact campaigning against plastics. A Maori actress became a psychiatrist focused on the intergenerational trauma of her people. A Chinese engineer at a prominent U.S. institution went back to China to take a chance on a solar start-up.

Canadian biology professor Kirsten Muller told the group how she watched her hometown of Fort McMurray burn in catastrophic wildfires in May 2016 — the same week her father’s death was caused by excessive heat and poor air quality.

“Climate change is personal,” she said. “At that moment I had a really good look at my life.

“I was doing research working on industrial projects with algae meant to make some people wealthy. I woke up every morning hating it.” So she and colleagues raised money to launch a project looking at fires’ impacts on toxic algae blooms shutting down drinking water systems. Now, she feels her work is making a difference.

A wilderness in peril

Dec. 1 — midway through the women’s journey — was the 60th anniversary of the Antarctic Treaty, which forbade military or nuclear activities and resource extraction on the continent and set it aside for the peaceful pursuit of science. Many scientists, policy experts and tourism operators describe it as an encouraging example of international cooperation, with a network of research stations, tourism operators and government representatives working together to protect the ecosystem and keep people safe.

“The Southern Ocean is the lung of the world,” absorbing and sequestering carbon and heat and sending nutrients to the other oceans, said Dr. Clothilde Langlais, a Tasmania-based French oceanographer on the Homeward Bound journey. “It’s like the ocean is trying to protect the world, trying to mitigate all this climate change. But the ocean cannot take it anymore.”

Nonetheless, 200 years after the first known explorer set foot here, Antarctica is facing dire threats from human activities. The most prominent is climate change, which is warming the Southern Ocean that surrounds Antarctica more quickly than other oceans. The Antarctic ice sheet that holds at least 60% of the world’s freshwater is shrinking, and the glaciers are receding. The Intergovernmental Panel on Climate Change’s report released in September predicted with “very high confidence” that melting of the Antarctic ice sheet could cause up to several meters of sea level rise within a few centuries. Melting ice sheets could also have serious impacts on the circumpolar current, which drives ocean currents and regulates climate worldwide.

Invasive species, microplastics traveling in ocean waters from thousands of miles away, and pollution — including from tourism — also affect Antarctica’s environment and wildlife. More than 55,000 tourists visited Antarctica during the 2018-19 Antarctic summer season, up from 12,000 in 2000, according to the International Association of Antarctica Tour Operators.

Antarctica is also threatened by overfishing. Three new marine protected areas are being proposed before the multinational body on Antarctic conservation that meets every October. One covers much of the Antarctic peninsula, a spectacular and biodiverse region and the continent’s main tourist destination. The proposed agreement would limit the capture of krill, a tiny shrimp-like fish that is a crucial food source for penguins, seabirds and seals. Commercially, it is used for fish meal and Omega 3 supplements.

The push for the peninsular marine protected area is being spearheaded by women scientists from Chile and Argentina. While the first explorer is said to have set foot on Antarctica in 1820 (there were no known indigenous inhabitants), women were long stymied in attempts to join exploratory and research expeditions, according to historians. Women researchers did not spend the winter in Antarctica until 1974. Antarctic scientist Dr. Justine Shaw, co-founder of Homeward Bound, said women’s leadership is crucial to the future of Antarctica — another reason for bringing 100 women in STEMM there.

“Women have been absent from Antarctic science and Antarctic decision-making for a long time, there’s been a delay as an artifact of the heroic era when men would come down and conquer the great white continent,” said Shaw, a conservation biologist at the University of Queensland. “I’m captivated by preserving Antarctica — it’s the last true wilderness on the planet. If we can’t protect that, what hope is there?”

As a ranger and wildfire-fighter based in Melbourne, Lily Brown has seen firsthand the devastating impact of raging bush fires on her country. The temperature and ecosystem in Antarctica could hardly be more different, but the sense of urgency she felt about climate change was the same.

“Seeing orcas and humpbacks and hearing elephant seals on shore, and an albatross flying over — there were moments when I teared up thinking, ‘This place is so special, and we’re changing it irreversibly,’” she said. “There were overwhelming moments of guilt and shame and sadness. But being here particularly with this group of women, I want to turn that negative emotion into action.”

Chicago-area botanist Krissa Skogen studies the evening primrose that lives in the American Southwest, but she found parallels to the flora and fauna affected by climate change in Antarctica. Jing Hu left a major Chicago-area research institution to pursue a startup in her native China, using nano-materials to build ultra-durable solar thin-film that can survive in conditions like Antarctica. Scotland-based German molecular microbiologist Jana Schniete noted that understanding microbes that have survived in Antarctica for millennia could give us clues to the future of the planet.

Women also discussed the despair and depression about climate change, feelings  exacerbated by seeing what’s at risk in Antarctica.

After a massive coral bleaching on the Great Barrier Reef in 2016, ecologist Dr. Emma Kennedy said she and other coral scientists “felt a sense of full-blown panic” and she began “prepping” supplies in case of societal breakdown.

“It felt like it’s all going to unravel, like what’s going to be next, the forests?” she said. “Everything is dying so fast, things are disappearing before we can even understand them.”

Women on the trip agonized about their own impact on Antarctica during the trip, and the carbon footprint, which experts with the expedition company Polar Latitudes estimated at 7,000 pounds of carbon per person for the ship, plus the women’s flights. Despite their conflicted feelings, Kennedy and others said their determination to keep fight climate change was renewed by the voyage and the women on it.

“Being here and meeting these women made me feel there’s hope for change,” said Kennedy, who learned to dive in quarries in her native England and now works at the University of Queensland in Brisbane. “Seeing elephant seals made me so happy. They are so huge and prehistoric, so wild. I realized there are so many species out there still to fight for, and until they’re all gone it’s still worth fighting.”

Anika Molesworth had always planned to continue raising African sheep and goats on her family’s farm in the Australian outback. She described it wistfully as an “incredibly transformative place” where “dust devils dance across the horizon, dazzling electrical storms leave acres submerged under life-giving water … and a few hours after rain, wildflowers surround your feet.”

But because of hotter and drier weather, her family has had to give up most of its livestock, and she worries the operation won’t survive. “This place is incredibly fragile, this ancient landscape is becoming more difficult to manage than ever before,” she said. “My home is changing and my future is running away with it.”

She co-founded Farmers for Climate Action, trying to mobilize a traditionally conservative demographic.

For Schniete, Antarctica highlighted the precariousness of ecological balance, and also the resilience of animals and microbes that have thrived in this harsh climate for centuries, and could outlast humans.

“We’re just a very small piece in a much bigger picture, but we’ve had a huge impact on earth,” Schniete said as the ship tossed on icy waves. “We are essentially destroying our own habitat, our own home. Nature won’t care if we are around or not, so if we want to save where we live, we need to do something about it. We are guests here and we have to behave that way.”