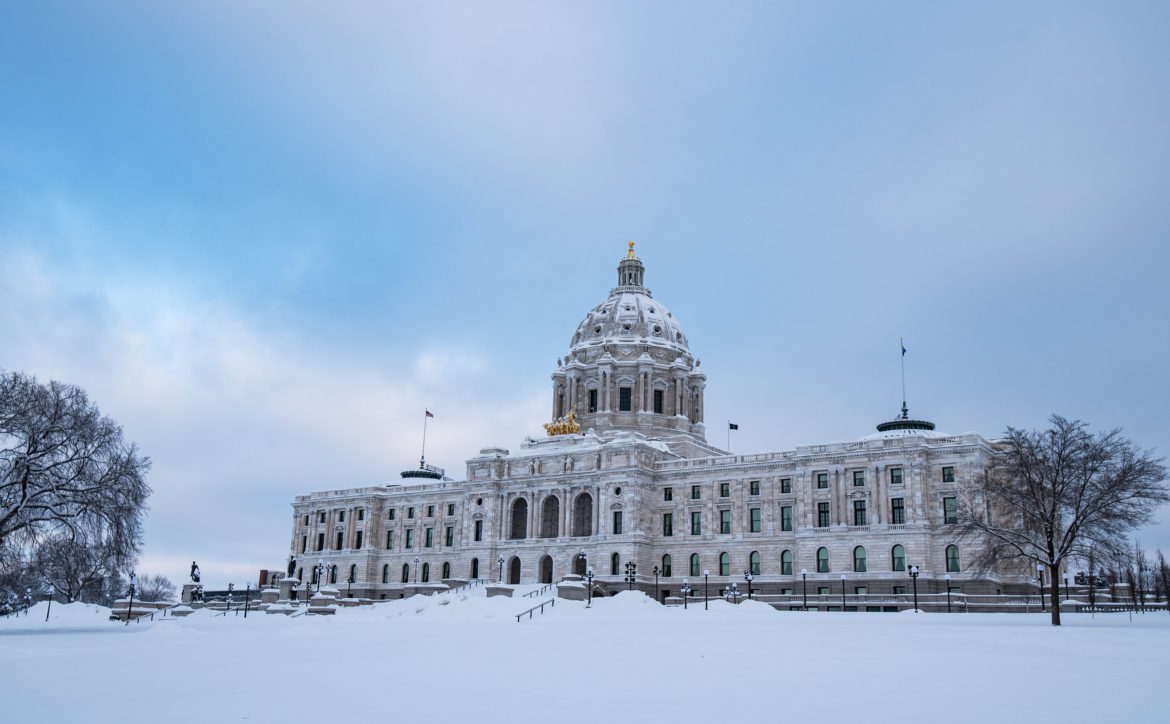 The state government’s progress on emissions stalled in 2018; officials cite a cold winter and hot summer.

A cold, snowy winter and hot summer were factors causing Minnesota to lose ground in 2018 in its push to cut greenhouse gas emissions.

The backslide can be seen on a new state sustainability dashboard that lets users view fuel and emission measures by agency or state government overall.

Will Seuffert, executive director of the state Environmental Quality Board, sees the scorecard as a way for the state to lead by example. “If we don’t do it, how can we ask everyone else in the state to do it?” Seuffert said. “The goals are meant to track where we need to go statewide.”

Minnesota’s 2007 Next Generation Energy Act set a goal of reducing greenhouse gas emissions statewide 30% from 2005 levels by 2025, and 80% by 2050. A decade after the law was signed, state government had reduced its emissions more than 20% but then saw emissions rebound in 2018.

The state bought more hybrid and electric vehicles and agencies continued to purchase fuel efficient vehicles, but those gains were wiped out by added snow removal and reduced fuel efficiency from cold. State vehicles used 18.6 million gallons of fossil fuels in 2018, a 5% increase from the 2005 baseline year.

Minnesota state agencies are a third of the way toward their state building energy consumption goal after years of investment in efficiency projects, but improvement flattened last year. State officials also attributed the leveling off to weather factors.

The state’s scorecard illustrates how the state government can show leadership on climate change while encouraging residents and businesses to do their fair share to reduce energy, water and waste, Hunt said.

Developed by the Office of Enterprise Sustainability, the scorecard results come at a time when the state, as a whole, has made little headway its carbon emission goals. Gov. Tim Walz this month named a new subcabinet stocked with agency officials and other experts charged with tackling climate change.

“This is an existential challenge,” Walz said at a press conference. “We need to reduce carbon emissions.”

Internally, Walz followed in the footsteps of his predecessor, Mark Dayton, by issuing an executive order that set goals for state agencies in the six areas covered by the scorecard. The state wants to reduce fleet emissions and consumption of energy per square foot 30% by 2027.

In its role as one of Minnesota’s major employers, state government can play a significant part in identifying best practices in sustainability and for building the market for more electric vehicle sales, Seuffert said. And local governments, school districts and university systems benefit from the state’s use of master contracts for procuring solar, electric vehicles and other products.

Agencies have now logged data into the scorecard for two years, Hunt said. With an inventory of thousands of buildings and vehicles, gathering data has been difficult for some agencies. Several departments have little control over energy use because employees work in leased office space operated by private landlords, she said.

Larry Herke, commissioner of the Department of Veteran’s Affairs, helped create the scorecard when he had Hunt’s job under Gov. Dayton. “There are various levels of engagement by each agency, but overall the enterprise is moving in the right direction,” he said.

Even large agencies with long records of tracking sustainability have found that reporting data helps identify areas in need of investment. One of the largest agencies, the Minnesota Department of Transportation, found the scorecard “has been a starting point for identifying sustainability strategies and areas where we need to take more action,” said sustainability coordinator Siri Simons. “It’s helped us focus our efforts in a few areas over the last few years.”

The transportation agency came away surprised by a lack of reduction in fleet emissions, she said. A 2019 fleet plan limits drivers to idling for three minutes or less, with exceptions, and calls for adding 30 charging stations and spreading more electric vehicles and hybrids around the state.

The agency also retrofitted more than 1,000 buildings and subscribed to 23 community solar gardens, Simons said. The community gardens will offset 24% of agency’s energy consumption. “It was a big first step for us to increase the amount of clean energy our agency uses,” she said.

The Department of Transportation’s first efforts cost less than investments that come later as the agency approaches the state’s goals. “As we try to reach our goals, we might have to make bigger investments, and that will be challenging,” Simons said.

The Department of Natural Resources has focused on energy and gas emissions for a decade, said sustainability coordinator Mark Lindquist. One challenge continues to be transportation; many employees rely on pickup trucks. The department plans to invest in electric vehicles as more become available that are suited to the department’s needs. Smaller “electric neighborhood vehicles” have been successfully piloted in state parks where drivers travel few miles, Lindquist said.

The use of videoconferencing has been a boon for reducing vehicle miles. “It’s displacing phone calls and travel, and there’s a lot of value in that,” Lindquist said. “With a staff spread across the state, that matters.”

The agency has cut heating and electricity costs by retrofitting buildings and installing LED lighting, high-efficiency heating and cooling equipment, air-source heat pumps, and geothermal systems. Solar added 650 kilowatts to buildings, including arrays at state parks and its St. Paul office, Lindquist said. The retirement of a fish hatchery reduced energy consumption, too.

When Herke took the job of veteran’s affairs commissioner, the agency’s past reports did not even mention sustainability. Now five new veteran’s homes will have car charging stations, onsite water management, geothermal heating, and, potentially, photovoltaic and thermal solar.

Transportation remains the department’s biggest challenge. Idling uses 62% of fuel as drivers move veterans to multiple locations, among them health appointments. Once the fleet becomes electrified, idling time could be used for charging, Herke said.

Encouraged by the state’s sustainability goals, the Minnesota Housing Finance Agency began tracking energy use and developing a “green lease” a few years ago before moving to new office space in downtown St. Paul.

The agency paid utility costs for years as part of a contract with its landlords, rather than separately, making data collection challenging and subject to delays, said Katherine Teiken, clean energy program specialist.

Even in the space governed by a green lease, if a bump in energy happens, “it’s not always as easy to take action and to determine, if we need to take action, whether it is on the landlord or is it on us,” she said. “If we owned the space, we could take action immediately.”

Still, the agency’s green lease has delivered on sustainability by having low-flow faucets and toilets, daylighting, LED lighting, lighting controls, motion sensors and recycling bins, she said. Next up is a conversation with its landlord, the St. Paul Port Authority, about putting up solar on the roof or joining a community solar garden. Since the agency does not pay for energy separately, it cannot invest in either of those options.

“We haven’t had that conversation yet with our landlord, but it’s definitely something we’re interested in,” Teiken said.

Hunt likes what agencies are doing and plans to add a few programs that will help. Another master contract through the Solar Possible program will be completed soon and should initiate more installations in state and local agencies. A proposed revolving fund could pay for building retrofits and use energy savings for future projects.

Tracking results of sustainability investments matters to state employees and taxpayers. “If you don’t measure something, you don’t manage it,” she said. “It’s important to allow the public to scrutinize our work and give feedback.”