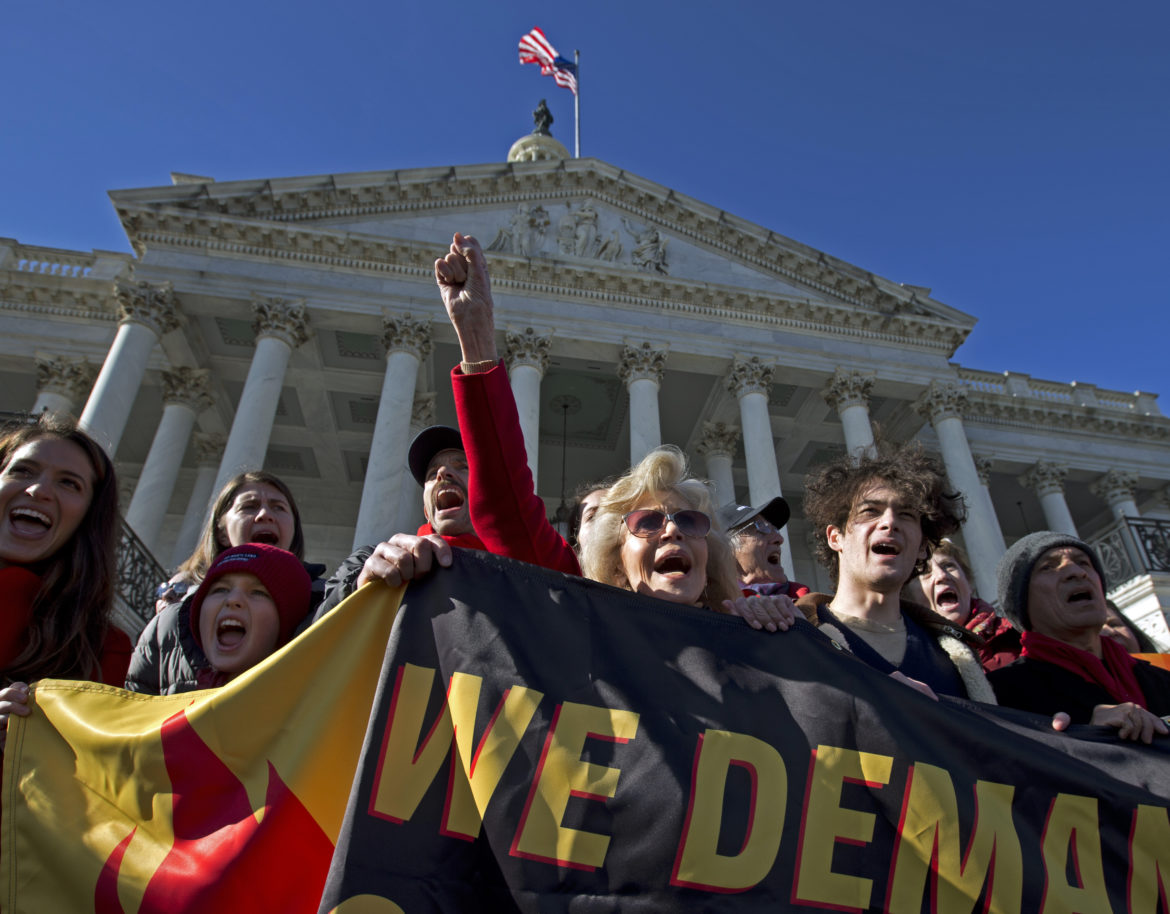 Actress Jane Fonda and 11-year-old actor Iain Armitage, left, protest during "Fire Drill Friday" on Capitol Hill, calling on Congress for action to address climate change. A half-century after throwing her celebrity status into Vietnam War protests, Fonda is now doing the same in a U.S. climate movement where the average age is 18.

In a sobering speech, the actress, activist and fitness guru said she draws inspiration from young climate activists such as Greta Thunberg.

WASHINGTON — Jane Fonda is losing her voice after weeks as a human megaphone for change at outdoor climate rallies on Capitol Hill.

Despite intermittent hoarseness, the message the Oscar-winning actress, activist and fitness guru delivered indoors Tuesday afternoon was strong, clear and firm: “I beg people to ratchet up their action on climate,” she told a sold-out, rapt audience at the National Press Club. “This is it, folks. This is the time.”

The Californian has basically moved to the nation’s capital for four months to lead Fire Drill Fridays. Demonstrators at the recurring event are demanding that political leaders address what they define as a climate emergency roiling the planet.

Civil disobedience is the focus on Fridays. Thursdays are dedicated to teach-ins on climate-related topics such as human health, forests and holding fossil fuel corporations accountable.

Fonda delivered a sobering speech on the perilous state of a planet pumped to the breaking point with carbon dioxide, methane and other heat-trapping gases. But she also sprinkled humor and reasons for hope into her half-hour talk and a follow-up question-and-answer session.

For instance, it was the bravery of teenagers such as Sweden’s Greta Thunberg, just named Time magazine’s person of the year, that motivated Fonda to come to Washington at all. Millions have marched for climate action since Thunberg began a lone protest at her home country’s parliament last year.

Fonda said her idea jelled in early September when she spent time at the iconic Big Sur in California with friends and actors Catherine Keener and Rosanna Arquette. She was shaken by the devastating wildfires in her home state and by reading an early copy of Naomi Klein’s book, “On Fire: The (Burning) Case for a Green New Deal.”

“I decided it was time for me to do more,” she said, adding that she lost sleep trying to find words to galvanize people to act and “understand that it’s too late for moderation.”

Fonda noted that about five weeks into Fire Drill Fridays, the event began to gain traction.

“People are coming from all over the country to do something they’ve never done before: engage in civil disobedience and get arrested,” she said. “And they’re transformed. It’s so hard to align our bodies with our deepest values and become integrated as people, and that’s what these types of actions do.”

She blamed the fossil fuel industry for putting a stranglehold on the nation’s political system, harming the environment and sowing doubt and denial about scientific proof that climate change was occurring. That, she said, set the country and the rest of the world back decades on advancing policies to curb greenhouse gas emissions.

Fonda called for a switch to 100% clean renewable power, emphasizing that wind and solar create energy security and independence at competitive prices.

While that’s doable, she said, changing course and overcoming a climate crisis won’t be possible without “profound, systemic, economic and social change.”

Preventing the further unraveling of Earth’s life-sustaining systems and the fabric of society “is going to take an all-out war on drilling and fracking and  deregulation and racism and misogyny and colonialism and despair all at the same time,” she said about doing the hard work of addressing inequality and injustice. And everybody needs to be part of the conversation.

Fonda wholeheartedly endorsed legislation detailing a Green New Deal as “exactly the kind of brave, bold leadership we need to see from our next president.” It’s currently bottled up in Congress.

She praised measures within its framework that would halt new fossil fuel leases, infrastructure and exports; spur investment in public renewable energy; deploy the Clean Air Act to slash greenhouse gas emissions and prosecute polluters; collaborate with local and state governments; and create a task force to ensure support for communities disproportionately harmed by the transition to clean energy from a fossil fuel economy.

“Yes, it will be a huge, disruptive, super-ambitious undertaking and yes, it will cost a whole lot of money,” she said. “But think what inaction costs.”

Not surprisingly, Fonda noted, the Green New Deal has been dismissed as socialist and fascist, the same insults hurled at the New Deal when President Franklin Roosevelt unveiled it in the 1930s.

“The same interests that hated the New Deal are the ones telling us today that the Green New Deal is bad,” she said. “They’ve convinced people that big government is evil. It’s not the size of the government that matters, it’s who the government is working for.”

Roosevelt charged forward when there was a groundswell of support from the masses for social and economic reform, she said. And that same sort of conviction is necessary today.

Though Fonda wouldn’t reveal which Democrat she was backing in the presidential race, she hinted strongly that her choice wasn’t a moderate.

No matter who is elected — or re-elected in the case of President Trump — the only way to push for the elements of a Green New Deal is to have massive numbers of people in the streets holding leaders’ feet to the fire, she said.

This Friday will be Fonda’s 11th protest — and potential fifth arrest — on the day before she turns 82. Gloria Steinem, Martin Sheen and the Rev. William Barber are among the household names who will be joining this week’s drill.

Fonda said she has no qualms about deploying her celebrity to stand up for a cause. This country’s fascination with fame means she will attract news coverage, unlike everyday climate protesters who have persisted for years.

“It was the best way I could think of using my voice to raise the sense of urgency and get the word out wider,” said Fonda, whose protest history extends back to the days of the Vietnam War.

Being away from home for such a long stretch has been difficult sometimes because she worries about the health of her aging dog. Plus, she joked, she feels like the next time she will set eyes on her 4-month-old grandson, he’ll be in college.

Though she pleaded to extend her time in Washington, the head of Netflix had already set a deadline for creating the final season of “Grace and Frankie.” Comedian Lily Tomlin, her co-star in the sitcom, is coming to Washington on Dec. 27 “to get arrested with me,” Fonda told the applauding crowd.

In September, she had committed to being arrested every week for the duration of the D.C. protest. But she has told various media outlets she had dialed back on that goal after spending a harrowing night in the District of Columbia’s jail.

Though Fonda won’t physically be on Capitol Hill after early January, she won’t be abandoning the climate cause.

When she finishes the sitcom next July, she and other Fire Drill Friday stalwarts will “drive around the country because people want to start it in their own towns and cities. We’re going to take it and build the army” of climate activists.

“The young ones have been here for a year. They are the ones who inspired me and they’re going to be here when I’m gone.”