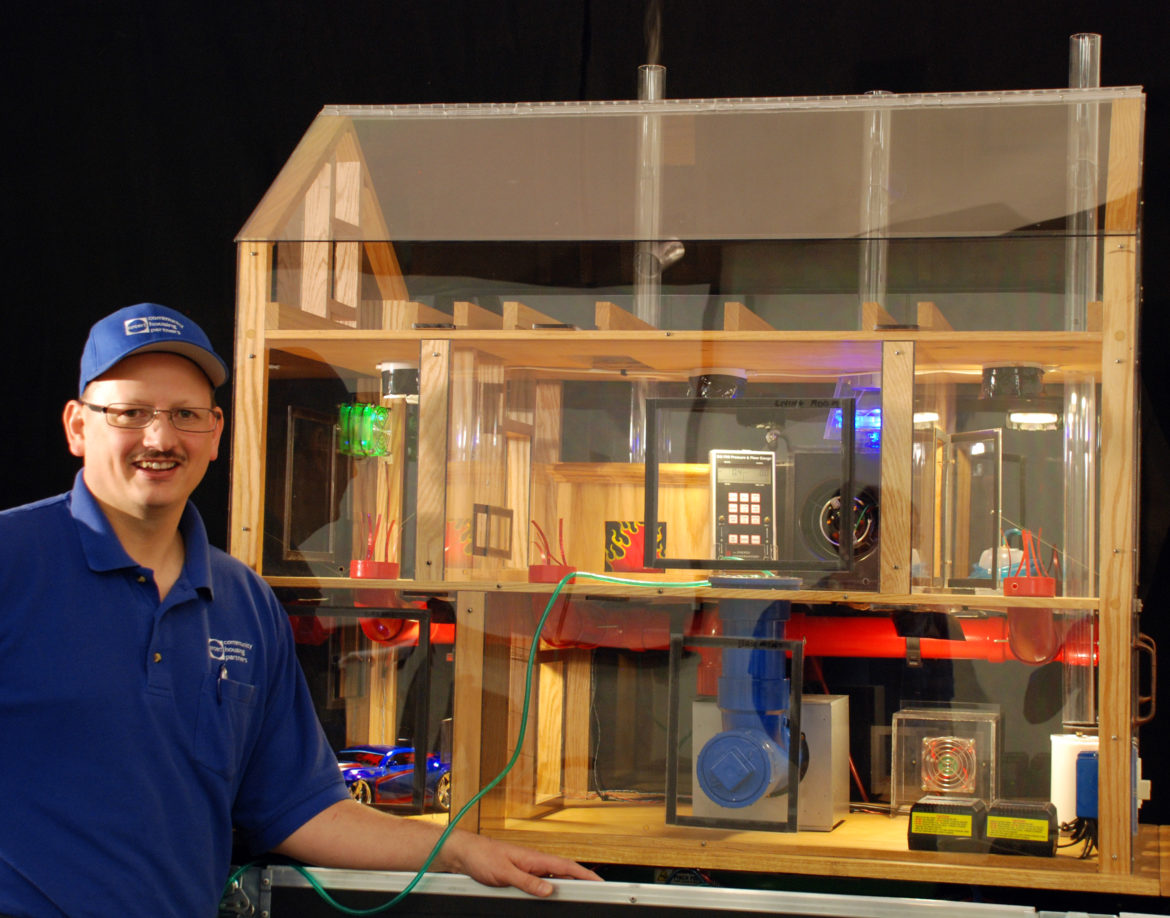 Anthony Cox designed the House of Pressure to teach hands-on principles of energy efficiency for groups from kids to senior citizens. “I can do a five-minute demonstration or go in-depth for three days on more than you ever want to know,” he said.

The dollhouse-size models come with miniature props that show how poorly executed weatherization can backfire.

In weatherization circles, Anthony Cox has a reputation as the HOP and HAM guy. That nickname, however, has nothing to do with an affinity for beer or meat.

Instead, it’s a tribute to a pair of popular, portable model homes the Virginian has crafted — the House of Pressure and the Heat, Air and Moisture House — that help lessons in energy efficiency come alive for everyone from wide-eyed elementary school students to longtime building-science professionals.

“It’s tactile,” said Cox, the lead trainer for Community Housing Partners Energy Solutions in Christiansburg, Virginia. “By putting their hands on it and seeing principles applied, people better understand theory and why it’s so important to balance heating, ventilating and air conditioning in today’s homes.”

Audiences are intrigued when he deploys miniature props such as model-train smoke generators, computer fans and butter warmers in his dollhouse-size creations to show how poorly executed weatherization methods can backfire — or even be deadly — if ventilation is out of kilter.

“Kids love it,” Cox said, as do senior citizens and high school and college students. “I can do a five-minute demonstration or go in-depth for three days on more than you ever want to know.”

The interactive educational tools have resonated enough that the Christiansburg nonprofit has turned its production into somewhat of a cottage industry. The three-story Heat, Air and Moisture House costs $6,250, while the small and large two-story versions of the House of Pressure are $6,850 and $8,000, respectively.

Almost every state has at least one HAM or HOP house, according to an electronic map Cox updates regularly. And his handiwork serves as an educational beacon in Canada and Argentina as well.

Building science training centers and other HVAC affiliates are top clients. But Cox also has answered queries from and made sales to the fluid mechanics lab at the University of Texas, museums, doctors and jails.

“I didn’t build them to sell them,” Cox said. “This is a lot of systems working together. I wanted people to be able to break it down to simpler pieces and have an ‘aha!’ moment by figuring out what they need to do to fix a problem. You can do different scenarios and demonstrate what changes need to be made.”

Charlie Smith, a seasoned instructor with the Kentucky Housing Corporation in Frankfort, refers to the models as “one of the world’s best training tools that anybody could have.”

The one HAM House and two HOP Houses his quasi-government agency purchased are “magnets for my students,” many of whom are in their 40s, 50s and 60s. The public corporation offers programs and services designed to develop and sustain affordable housing throughout Kentucky.

“You can explain something to people, but until they actually see it, it doesn’t sink in,” Smith said.

One such lesson takes hold when he releases dark puffs from the mini-locomotive smoker into the HOP House. Students know there’s trouble if the cloudiness lingers instead of exiting via the chimney. That could indicate a dangerous backdraft from a gas water heater or other combustion appliance. Without proper venting that accounts for seasonal changes to outdoor temperatures, deadly carbon monoxide can waft back into a house.

Cox first toyed around with the idea of a three-dimensional model in the mid-1990s when he shaped manila folders into a flimsy prototype while working for the weatherization program at the New River Community Action, a nonprofit anti-poverty agency.

After follow-up tinkering with cardboard and insulation board, he settled on a HOP House crafted from wood and Plexiglas. However, the logistics for shipping such a bulky item — its base alone was close to 4 feet by 4 feet — from Virginia to a weatherization conference in Colorado proved such a logistics headache that it never made the trip. Cox did. But he was forced to resort to a less-inspiring overhead projector for his presentation.

By 1999, he had downsized the house and traded the Plexiglas front facing for polycarbonate. Instructors could write on the new clear surface with special markers and “it’s so tough, you can take a sledgehammer to it,” he said.

That same year, Cox landed a job at Community Housing Partners, where he’s now the building services manager. The nonprofit, founded in 1975, has evolved into an organization that focuses on energy training, construction management, real estate development and a range of related services in the Mid-Atlantic and Southeast.

The ebullient 51-year-old has always lived within 30 or so miles from where he grew up with five siblings in Floyd County, south of Christiansburg. Cox studied the building trades in high school and then business management at New River Community College. He gained home remodeling experience by apprenticing with a local contractor and then learned new construction techniques from an entrepreneurial uncle.

As insulation and other energy efficiency measures have made homes so airtight, he worried that ventilation, the “V” in the HVAC abbreviation, had been silenced.

That prompted Cox to fabricate the HAM House. Smith, who has a strong HVAC background, and other instructors use it to teach budding professionals how to add ventilation to their suite of heating and air conditioning expertise. It involves preventing or properly venting moisture that can cause mold, attic ice dams and human illness.

“The tighter the house, the higher the effects of moisture,” Smith said. “We’ve got to make sure we’re not leaving houses unsafe or creating more problems down the road.”

He and Cox have bonded by teaching classes in each other’s states and trading tips.

“I’ve learned a lot from Anthony,” Smith said. “We work good together. Usually we’ll talk once a week to compare notes.”

Cox might be the chief designer of the HOP and HAM houses, but he now leaves model construction to Tim Heslep, who has a contract with Community Housing Partners.

“Tim is an artist,” Cox said about turning that task over. “I realized I wasn’t when I was trying to draw flames in one of the fireplaces and my son told me, ‘Dad, those look like worms.’”

Like any creative sort, he has experimented with special effects over the years. For instance, he tried theatrical fog before settling on model train smoke generators. To demonstrate the relationship among condensation, dew points and relative humidity, he used a mug of boiling water, then a clothes steamer, until he discovered the butter warmers.

The HAM House includes a meter to measure temperature, relative humidity and dew point, while the HOP House is designed to withstand a standard blower door test using a digital manometer and a duct blaster.

While the models include accoutrements such as teeny fireplaces and ductwork carved out of polyvinyl chloride pipe, he said he “leaves it up to the people who buy them to decorate them. If they want to wallpaper it, they can.”

Woodruff’s lesson was a featured attraction of the Virginia Energy Efficiency Council’s Fall Forum at the University of Richmond. Many attendees don’t regularly witness on-the-ground practices because they are usually immersed in energy policymaking.

“It’s a unique yet simple way to help people understand how building performance works,” Chelsea Harnish, the council’s executive director, said about demystifying a home’s innards. “Being able to visualize what happens in various everyday scenarios in the typical home makes it a lot easier to understand.”

Cox is as enthusiastic about his job as he was almost 30 years ago when he entered the field.

“‘It’s weatherization, not beautification,’” he said he tells trainees. “You have to be in crawlspaces and attics, so you can’t mind getting dirty.”

He also reminds prospective weatherizers that they won’t be successful unless they are ready to help people and absorb streams of new information as the industry becomes more sophisticated.

“I’m learning all the time,” Cox said. “It’s been a long, enjoyable ride.”