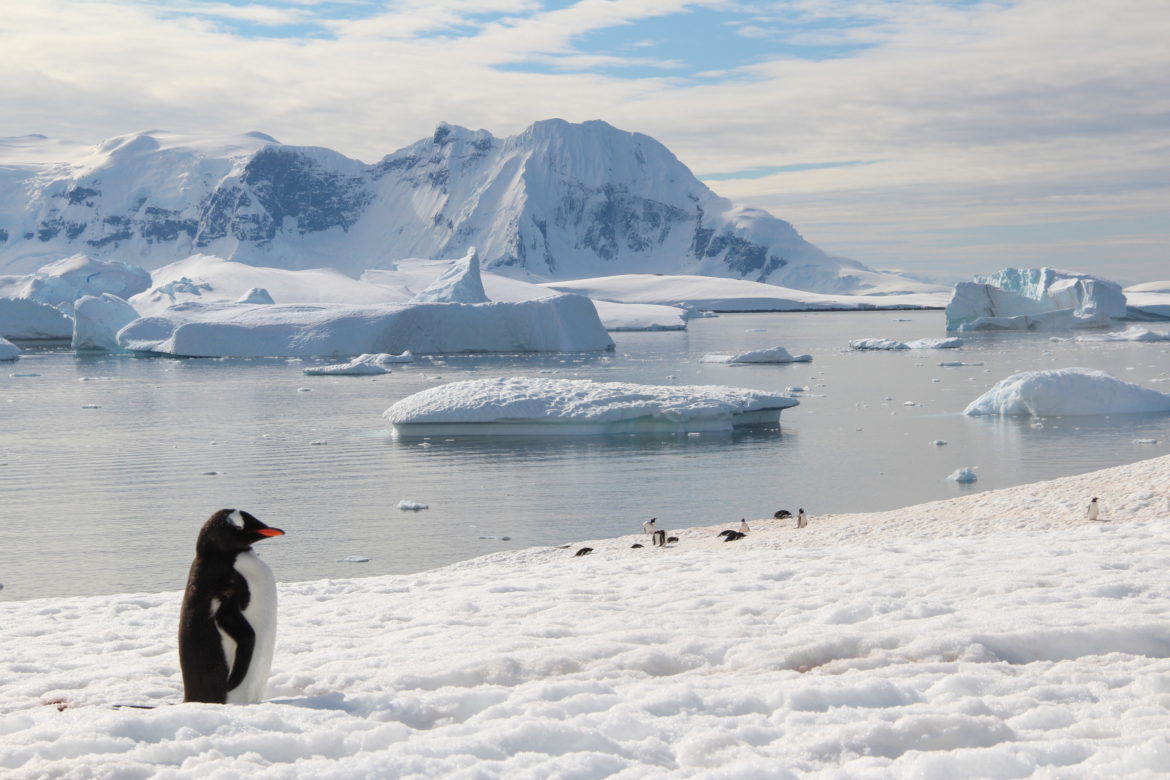 Energy News Network reporter Kari Lydersen traveled to Antarctica with Homeward Bound, an initiative with the goal of building women's leadership in the fight against climate change. After her return, she reflected on the significance of visiting a place most people never will, nor should, she says.

Journalist Kari Lydersen describes how a trip to the rarely seen continent left her grappling with grave responsibility.

Editor’s note: The following is a first-person account from Energy News Network reporter Kari Lydersen, who recently traveled to Antarctica with an initiative aimed at building women’s leadership on climate change. Travel expenses were paid by Spanish renewable energy company Acciona, which had no editorial input or oversight. (See the Energy News Network Code of Ethics.)

The iceberg was like a crystalline floating palace, rocking rhythmically as waves sloshed through its columns and halls with a rushing sound. Its underwater chambers a stunning glowing turquoise, its deepest reaches a brilliant dark blue, its outer walls pristine white.

The rest of the world fell away as I was overcome by absolute, all-encompassing wonder and awe. Countless icebergs of equally ethereal beauty and surreal construction have been traveling these waters in the Southern Ocean for millennia, mostly unobserved by humans.

It brought to mind the question, “If a tree falls in the forest and no one hears it, does it still make a sound?” When the majesty and magic of nature unfolds without the human gaze or benefit of human consumption, does it still exist?

Antarctica gave me a glimpse of what the earth looks like without humans, and drove home the fact that the wonderful intricacy of the planet exists mostly separate from and unseen by people. Our attempts to understand and master it — valiant and amazing as they sometimes are — remain feeble in context.

Antarctica also made blindingly clear — as the blazing sun reflected off mountains of ice — the horror and tragedy of what humans have done to the earth with climate change. And against the backdrop of such wild and timeless beauty, the reasons we have continued to do so seem unforgivably venal and petty. Inertia, convenience, cowardice, apathy, an inability to collectively think creatively and act boldly enough to make the changes needed to even partially stem the destruction we’ve unleashed.

The harsh realization is enough to cause depression. And many of the women on the ship with me talked of plunging into a dark place because of the impacts of and political inaction on climate change in recent years. Coral scientist Emma Kennedy’s voice broke, her eyes reflecting desperation, as she said, “I just wanted to study animals, and now it’s nothing but climate change.” She and other women described the visceral despair they felt after the massive coral bleaching of 2016, when colorful thriving reefs they knew intimately became  ghostly white undersea deserts.

I was in Antarctica with 100 women from around the world in science, technology, engineering, math and medical (STEMM) fields as part of an expedition convened by the Australia-based initiative Homeward Bound, with the goal of building women’s leadership to create a more sustainable world. For most of the women on the trip, climate change and its impact on the plants, animals, and ecosystems they study and love is a constant scourge never far from their minds.

Some of them study the impacts and complexities of climate change. Others work on solutions, in renewable energy, waste management, farming, policy and communication. Meeting them instilled as much hope as possible given the staggering odds and stakes.

Read more: For women on Antarctic trip, a chance to reshape climate research and more

Tunisian geneticist Dr. Samia Elfekih approaches her work with irrepressible joy and enthusiasm, helping to curb dengue fever and malaria even as climate change means such tropical diseases are spreading more widely. She leads projects around the world genetically altering mosquito populations so they don’t carry the diseases. She recounted erupting with excitement upon finding an old tire in an alley — a mosquito breeding spot!

New Zealand’s Rachel Cooper is crafting and pushing forward an innovative policy in the legislature: putting a price on the greenhouse gas emissions of livestock, and helping farmers reduce the emissions from from livestock. (Scientists have been exploring how to reduce the methane livestock emit, including through feed additives derived from algae.) At just 23 years old, she has a post providing recommendations to the prime minster’s chief science adviser.

Californian Kristin Raja’s main goal is to achieve net-zero carbon emissions by 2050. She joined the National Oceanic and Atmospheric Adminstration as a commissioned officer to help further this mission. She’s surveyed Arctic waterways opened up by melting ice, and she oversees research in the Channel Islands, where climate change is decimating massive kelp forests. Raja is a passionate advocate for solar energy, and she installs solar as a volunteer for the California nonprofit SunWork, helping lower-income households and nonprofit organizations afford solar.

Cultural anthropologist Ka-Ming Wu of Hong Kong studies the plague of waste stockpiled and trafficked between countries, and the way such environmental injustice intersects with misogyny and political repression.

Talking with them and the many other women on the voyage from our ship near the bottom of the world, it was possible to visualize how disparate cultural, political and economic trends intertwine around the globe, driving climate change and its complex web of impacts. The stark clarity of our surroundings also made it seem it should be possible to cut through the metastasizing consumerism, suffocating bureaucracy and political inertia that have prevented us from addressing climate change.

Relatively few people will ever see Antarctica, and even fewer should see it, since the carbon footprint and ecological impacts of such travel are significant. Like the other women on the trip, I feel immensely privileged and grateful for the chance, and I’m now grappling with the grave responsibility that such an experience conveys.

Among other things I know it is crucial to remember the sense of awe I felt watching that iceberg, and extend that sentiment to the countless patches of my surroundings that are more familiar and seemingly less spectacular. If the earth seems already exploited, soiled and irretrievably altered, it’s that much easier to turn a blind eye as our use of fossil fuels and frenetic consumption continues to degrade it.

As our ship crossed the “convergence” between the Southern Ocean and the Atlantic and Pacific, I plumbed my memory for other moments when I felt the sense of abject wonder invoked by that iceberg. I remembered a late summer evening on the perimeter of an oil refinery in Northwest Indiana, one of the most polluted regions in the U.S., where the slanting sun gilded a riot of sunflowers and purple thistles growing amid chain link fence and twisted metal.

The sunflowers and thistles represented resilience and the irrepressible power of nature. And the earth is indeed resilient. But we can’t mistake that resiliency for indestructibleness, and we can’t deny the impact that we have through our use of energy and the lifestyles it facilitates. When we get past denial, feelings of guilt, shame, remorse and fear are an understandable but unproductive response. Rather, we need determination, creativity, ingenuity and courage, in many sectors and settings, with the energy sector prominent among them.

The women I met in Antarctica epitomized all these qualities and increased my ability to have hope in the face of climate change, even after becoming all the more painfully aware of what we’ve done and what’s at stake.

I inferred much symbolism for the fight against climate change as Ka-ming Wu described the protests in her home, Hong Kong. She said people there felt far removed from places like Chile, Iraq and Indonesia, until taking to the streets and risking their lives and freedom, seeing how similar their struggles are to people around the world.

“All of a sudden we find the bedrock of our society stripped away so quickly,” Wu told me. “We can’t take our world for granted. We have to fight for it.”