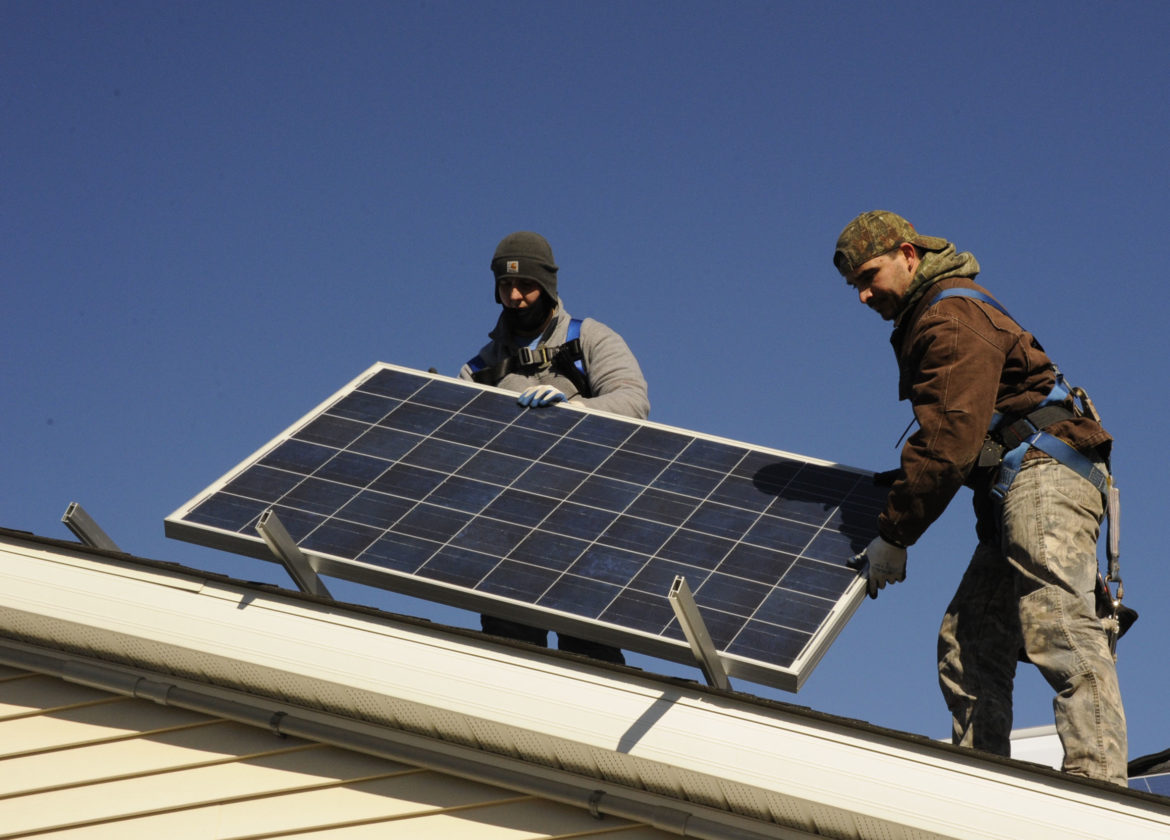 A pair of solar installers line up a panel atop a home. A fee on residential solar customers in Kansas has led to a significant decrease in solar sales, installers say.

The number of customers seeking to connect solar panels in eastern Kansas plunged in the year after the region’s utility placed a new fee on solar customers.

Evergy, the state’s largest electric utility, instituted a demand fee on residential solar customers in October 2018. The customers now pay an additional charge each month based on their peak electricity use during a billing period.

Solar installers say the fees have made the financial case for residential solar panels less certain and more complicated, which has led to a significant decrease in sales. One even abandoned the market altogether as solar and environmental groups continue to challenge the fee in court.

“People are pretty nervous to go solar when they have to agree to the additional demand charge,” said Andy Rondon, sales manager for Good Energy Solutions in Lawrence. He estimated that the company’s residential sales in the state have fallen by about 20% since the demand fee was put in place.

The overall drop in projects in the region is even greater. A spokesperson for Evergy said the company had received 201 solar interconnection requests in 2019 through the end of October. That put it on pace to finish the year down by more than a third from 2018, when it received 385 requests.

Demand fees are a standard feature for commercial customers but a rarity for home-energy users. They’re designed to capture the value a utility provides from being able to meet a customer’s highest demand at any time, regardless of how much power they actually use most of the time. Even a customer who uses little power can wind up with a high demand charge if their air conditioner, toaster and refrigerator happen to all kick on at the same time.

“It does require something between a lifestyle change and a heightened awareness,” Rondon said. “They have to be a lot more actively involved in their energy consumption. A lot of people don’t want to sign up for that.”

The fees have been discouraging to installers and customers. Mark Horst, owner of King Solar in Hutchinson, Kansas, said he now has to spend substantially more time explaining the nuances of the demand fee to potential buyers. “Ninety-five percent of residential people don’t have a clue what that is. We have to spend at least one-third more time with every potential client educating them on what that means.”

The bottom line, he said: “The cost for customer acquisition has gone up.”

Lawrence-based Cromwell Environmental lost about half of its residential installation business between 2018 and 2019, according to Scott White, the company’s research and project analyst. “Residential has been our bread and butter,” he noted.

Because of the demand fee’s impact on the economics of rooftop solar, Kansas City-based Sun Solar stopped seeking business in Kansas shortly after the demand fee took effect, a spokesperson said. Other installers have similarly tried to soften the financial blow by seeking business elsewhere, in the commercial market or across the state line in Missouri.

Negotiations between the utility and solar advocates are continuing, according to Dorothy Barnett, director of Kansas’ Climate & Energy Project. She would like to institute a time-of-use rate in place of a demand fee, but doesn’t think it’s likely that solar promoters will reach agreement on that.

The Sierra Club and Vote Solar appealed a Kansas Court of Appeals ruling last April that upheld the decision by the Kansas Corporation Commission. They claim the fee discriminates against customers with solar panels and thereby violates both state and federal laws.