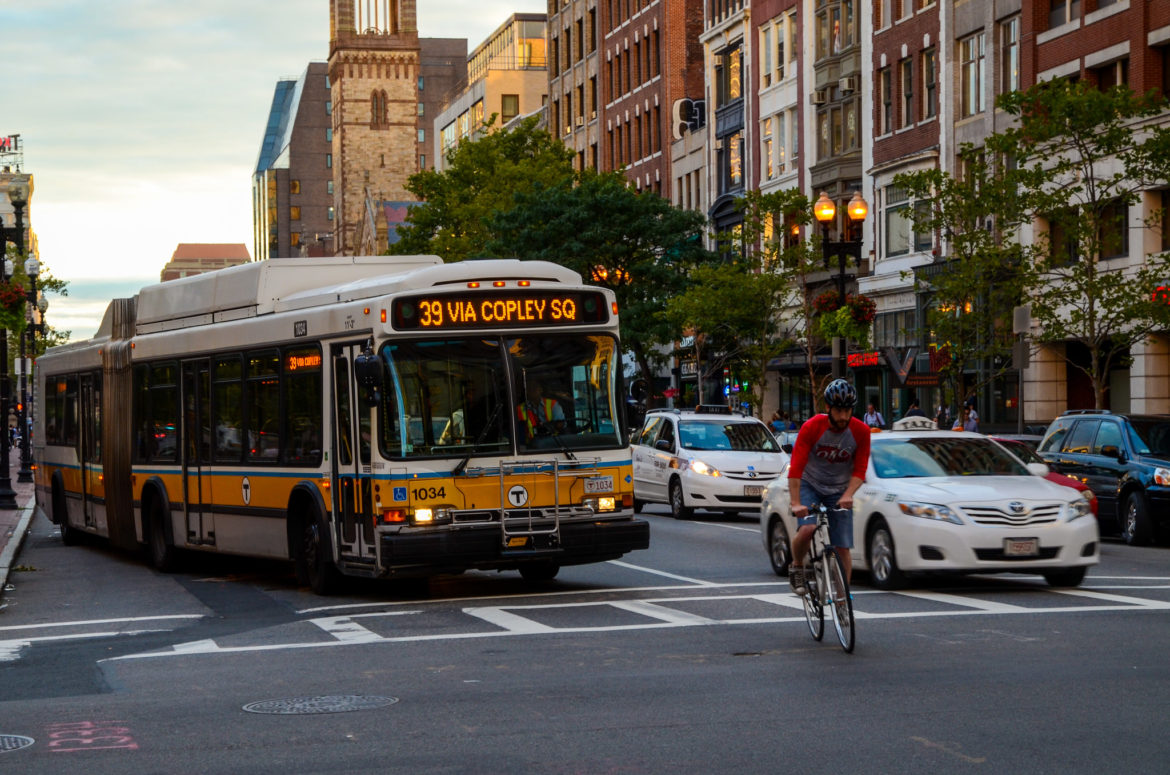 An MBTA bus pulls away from a curb in Boston, Massachusetts. As the state works to reduce traffic congestion and pollution, civic and environmental groups are urging the Boston-area transit agency to commit to buying only electric buses by 2030.

A coalition of environmental and civic groups is urging Massachusetts’ biggest public transit agency to speed its adoption of electric buses and prioritize the deployment of cleaner buses in disadvantaged neighborhoods.

“We just think the time is now and there is a huge urgency to making that commitment,” said Eleanor Fort, senior campaign manager at environmental justice group Green For All and a member of the coalition.

In December, 21 organizations signed on to a letter asking the Massachusetts Bay Transit Authority (MBTA), the agency that runs the majority of the public transportation in the greater Boston area, to shorten the testing period for the five electric buses it already has on the road and commit to acquiring only electric buses by 2030. The letter also pushes the transit authority to commit to a clear plan to upgrade its bus garages to make them ready to charge and maintain electric buses.

Transportation is the largest source of carbon dioxide in Massachusetts, accounting for 43% of the state’s emissions as of 2016. As the state attempts to cut emissions 80% by 2050, the sector is a major target for reductions.

At the same time, transportation has been an issue of great concern in the state in recent years. Traffic congestion in the greater Boston area is among the worst in the country and the MBTA has been under fire for safety and reliability concerns. Gov. Charlie Baker has proposed legislation that would commit $18 billion to highway construction, public transit improvements, and other measures intended to ease congestion.

As state leaders and lawmakers mobilize to tackle these problems, electrifying public transit must be an integral part of any plan, coalition members argue.

“There is no world in which we can address the worst impacts of climate change without transitioning off fossil fuels in our transportation system,” said Matt Casale, director of the 21st Century Transportation Campaign for the U.S. Public Interest Research Group and one of the signatories to the letter.

The transit authority says it is committed to sustainability and that plans for electrification are well underway.

“The MBTA is committed to being on the forefront of this emerging technology with the deployment of battery-electric buses as an important step toward lowering greenhouse gas emissions,” said transit authority spokesperson Lisa Battiston.

In 2018, the MBTA authorized the acquisition of 194 diesel-electric hybrid buses that are expected to reduce total fleet fuel use by about 5% and cut greenhouse gas emissions by 41,000 tons, according to official engineering estimates. Five fully electric buses are now in limited service as part of a two-year pilot program intended to gather data about the vehicles’ performance in the full range of Massachusetts weather conditions.

The major challenge to electrifying the fleet is the need to improve power delivery infrastructure, Battiston said. Buses are generally charged overnight, when demand for electricity is low, but the concentrated load of hundreds of buses drawing power at once could cause problems for the local grid, she said.

Major upgrades to bus garage wiring and infrastructure will also be needed before any more charging stations can be installed. Plans are already in the works to renovate or build four garages to accommodate electric bus charging, with the first slated to open in 2025, she said. The MBTA is also investigating the possible use of solar panels and battery storage to lower anticipated demand on the grid.

Still, the transit agency needs to start thinking about how to do more, faster, say the members of the coalition.

“There’s no concrete plan for moving forward,” Casale said. “Nobody is asking the [MBTA] to go out and ditch all their buses and replace them with electric buses today. We’re asking for a plan.”

The MBTA has outlined the possibility of acquiring up to 750 new buses before 2024, both to replace old vehicles and to expand the fleet, according to the coalition letter. The letter recommends that at least half of these purchases be electric buses. Because the average lifespan of an MBTA bus is 12 years, putting new diesel vehicles on the road now would lock the transit agency into higher levels of emissions well into the future.

The letter writers are also concerned about making sure the environmental benefits of new electric buses are felt equitably. Historically, low-income neighborhoods and areas heavily populated by people of color are more likely to suffer from the health consequences of diesel fumes from public transit buses. Diesel exhaust can cause headaches, dizziness, and eye and throat irritation in the short-term; long-term exposure increases risks of cancer, cardiac problems, and respiratory issues such as asthma.

As zero-emissions buses come online, they should be deployed to those neighborhoods that have traditionally borne the brunt of the pollution from diesel engines, Fort said.

“We want a priority to the communities that are already most exposed to heavy-duty tailpipe emissions,” she said.

Coalition members acknowledge that electric buses have a higher initial price, but note that the cost of powering, maintaining, and operating them is far lower than for diesel-driven options. Adding electric buses to the fleet, they argue, will ultimately result in significant cost savings.

“Really this is not an increased capital up-front cost,” Fort said. “It’s a long-term investment.”

Letter signers acknowledged the work the MBTA has done so far, but emphasized the importance of accelerating the shift to electric, for both the environment and public health.

“We can’t wait until 2030 or 2040 to start setting things in motion,” said Eugenia Gibbons, policy director at coalition member Green Energy Consumers Alliance. “That will be too late. We need to be doing it now.”