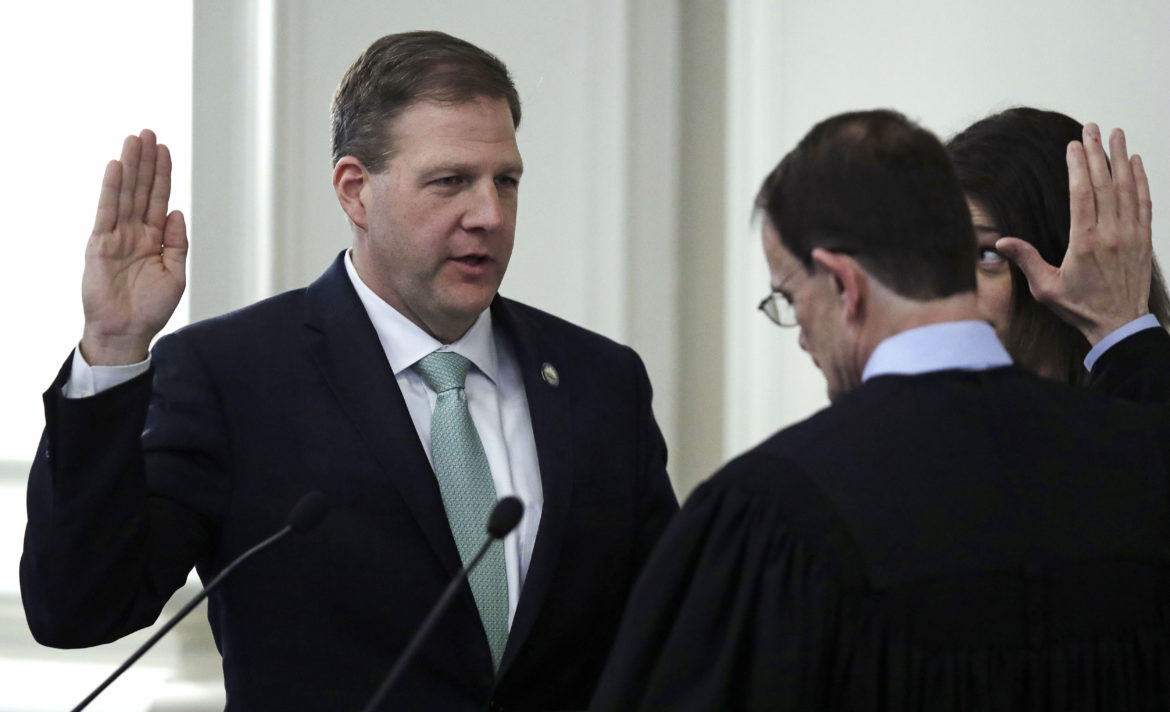 New Hampshire Gov. Chris Sununu takes the oath of office during his inauguration ceremony in January 2019, beginning his second two-year term. Under Sununu's leadership, the state has become an outlier in a region that is otherwise fairly proactive on climate change goals.

When New Hampshire Gov. Chris Sununu quickly rejected an ambitious proposal for a regional compact to reduce vehicle emissions last month, it was but the latest example of the Granite State’s increasingly conspicuous position as an outlier within a region that is otherwise fairly proactive on climate change goals.

The Republican governor’s declaration that the state would not participate in the Transportation and Climate Initiative’s cap-and-trade effort finished off a year that included his vetoes of several clean energy bills that arrived on his desk.

Sununu is the only governor in New England who has not joined the U.S. Climate Alliance, a bipartisan coalition of 24 governors committed to reducing greenhouse gas emissions.

And while New Hampshire is a somewhat reluctant member of the Regional Greenhouse Gas Initiative — a cooperative cap-and-trade effort aimed at reducing power plant emissions — for the past few years it has invested only a fraction of the proceeds from RGGI in energy efficiency. Most of the funds are directly rebated to ratepayers instead, on a per-kilowatt-hour basis.

“This administration has been slow to embrace the economic benefits of clean energy and clean transportation and is not doing enough to take on climate change,” said Jordan Stutt, carbon programs director at the Acadia Center. “While all the states have room to improve, we’ve seen the least progress in New Hampshire in recent years.”

New Hampshire has long prided itself on a small-government approach, as suggested by its official state motto: Live free or die. The state has no sales tax or income tax. Motorcyclists may ride helmet-free. Auto insurance is optional for drivers. And the state ranks last in the nation for its level of fiscal support for higher education.

With strong support from conservative groups like Americans for Prosperity, as well as the state’s leading business lobby, Sununu has applied that hands-off philosophy to state energy policy throughout his three years in office. His administration’s 10-year energy strategy emphasizes cost effectiveness above all, noting that New Hampshire has some of the highest electric rates in the nation.

In his Dec. 17 statement disavowing the proposal from the Transportation and Climate Initiative, a collaboration of 12 Northeast and Mid-Atlantic states and the District of Columbia, the governor referred to the plan as a “financial boondoggle” that would force drivers to pay more for gasoline and put rural communities at a “severe disadvantage.”

The model for the transportation initiative, which has been in the works for more than a year, is similar to that of RGGI. As outlined in a draft memorandum of understanding, the region would set a cap on greenhouse gas emissions from cars, trucks and other vehicles. The plan calls for a reduction of 20% to 25% by 2032.

Transportation fuel suppliers would have to buy allowances at auction for every ton of carbon dioxide their fuel will generate beyond the cap. The estimated $5 billion to $7 billion in auction proceeds annually would flow back to the states, which could invest the funds in projects that further reduce emissions, like charging infrastructure for electric vehicles.

The plan’s backers acknowledged that if fuel suppliers choose to pass along those costs to consumers at the pump, gas prices could rise anywhere from five to 17 cents per gallon, depending on the size of the cap.

Public comment is being sought through Feb. 28, and a final memorandum of understanding is expected in the spring. Each state will then have to decide whether to participate.

Despite Sununu’s declaration that New Hampshire is out, state statute gives the legislature that decision-making authority, according to Watters. (The governor’s office did not respond to questions.)

If New Hampshire decides to sit it out, Watters said he fears the state will be at an economic disadvantage.

“We will not then have that money to invest in efficiencies,” he said. “Other states will have it to put into electrification, or making grants to the trucking industry to increase the efficiency of their fleets, and so on.”

He is sponsoring legislation to set up a commission to study the proposal and consider the pros and cons of participating.

New Hampshire’s participation in RGGI has resulted in annual proceeds ranging from $11 million to $24 million over the past few years. However, the state has not invested as heavily in energy efficiency and renewables as other states. Legislation passed in 2012 requires most of the money to be rebated back to ratepayers.

“The rebate is throwing the money away basically,” said state Rep. John Mann, D-Alstead, who sponsored legislation last year to repeal that requirement. The bill passed, but the governor vetoed it.

He also vetoed a bill (HB 365) that would have increased the size limit on net-metered solar projects from 1 megawatt to 5 megawatts, saying at the time that it would benefit large-scale solar developers at the expense of ratepayers.

That bill had strong bipartisan support, and was also a priority for the New Hampshire Municipal Association; at least 30 municipalities want to launch net-metered projects to cut costs and possibly generate income, said Madeleine Mineau, executive director of Clean Energy NH, a nonprofit that advocates for and advises on clean energy issues. An attempt to override the veto failed by six votes.

“We are really far behind — we have less than 1% on solar deployment,” Mineau said. “Our net metering credit is so conservative.”

The state’s renewable portfolio standard is also out of step with the region, she said. It requires electricity providers to acquire 25.2% of the power they sell from renewable sources by 2025, while every other New England state has set much higher and longer-term goals, she said.

Legislation to raise the solar portion of the portfolio standard to 5.4% by 2025 was also vetoed by the governor last year.

The Business and Industry Association of New Hampshire lobbied against both the net metering and solar portfolio standard bills, arguing that both would ultimately increase already high energy costs.

“We are trying to strike the right balance between concern for climate change and protecting our environment, and the real-world impact on employers, particularly manufacturers,” said Jim Roche, the organization’s president. “Our manufacturers compete with companies around the globe, so they are very sensitive to the things that raise the cost of energy.”

One area where New Hampshire is making progress is preparing for the likely development of offshore wind in the Gulf of Maine, said Alli Gold Roberts, director of state policy for Ceres, a Boston-based nonprofit that works on sustainable business practices.

Sununu recently established four advisory boards to focus on various aspects of wind development, and mandated that two studies be completed by 2021. One will explore the greenhouse gas reduction potential of offshore wind, and the second will look at opportunities to attract offshore wind supply chain operations to New Hampshire.

Many New Hampshire municipalities are also showing considerable enthusiasm for setting their own clean energy goals, said Minueau, whose organization helps advise in those efforts.

“We are seeing a tremendous amount of leadership and a lot of work getting done by towns and energy committees,” she said. “There are some really small towns that have very engaged, local-energy champions.”