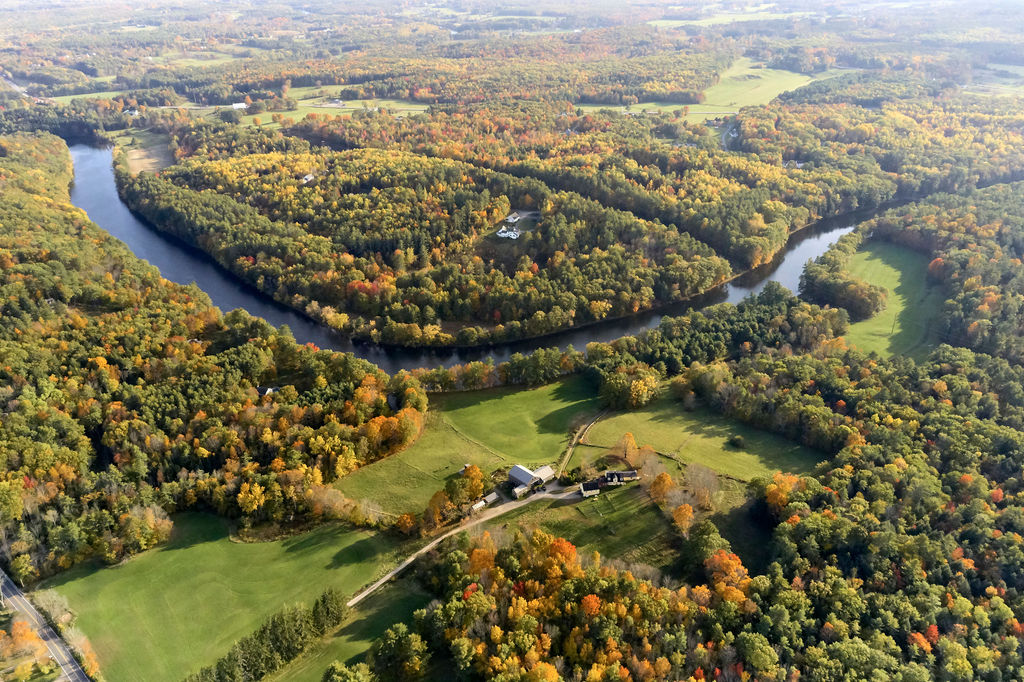 The Ecology School's new campus will occupy 105 acres of historic farmland along the Saco River.

The Ecology School’s new campus in Saco, Maine, is expected to produce more energy than it uses each year.

An environmental education center in southern Maine has broken ground on what it promises will be the most sustainable new construction in the Northeast.

The goal, planners said, is to create a project that can help demonstrate the opportunities for green building in a state that has historically lagged the rest of New England in adopting programs for energy efficiency and renewable power.

“It’s a prototype, to model what the future looks like,” said Drew Dumsch, founder of the Ecology School in Saco.

The school’s new campus will occupy 105 acres of historic farmland along the Saco River. The project is being built to qualify for certification under the Living Building Challenge, widely considered the most rigorous environmental performance standard available. One of the major requirements of the framework is that the project must generate more energy than it consumes in the course of a year.

Dozens of other requirements call for sustainably and locally sourced building materials, plentiful circulation of fresh air, preservation of habitat, integration of agriculture when possible, and elimination of chemicals that are dangerous to produce or be exposed to. The mandates are somewhat daunting and very challenging, but serve an important purpose, Dumsch said.

“They make it nearly impossible on purpose because they’re trying to really push ahead anything from design elements to construction to how local permitting authorities view building,” he said.

This project arrives just as Maine is recommitting its support for renewable energy, energy efficiency, and green building. From 2011 to 2019, Gov. Paul LePage actively opposed efforts to promote clean energy in the state. He replaced net metering, a system that credits solar energy generators for sending excess energy into the grid, with a policy that paid solar owners far less for their power and allowed utilities to charge them additional fees. State legislators passed multiple solar incentive packages, but LePage vetoed all such measures.

“Maine was sort of frozen solid with respect to much energy policy for eight years when Paul LePage was governor,” said David Wilby, the president of the Maine Renewable Energy Association. “We largely came into 2019 with nothing having changed for most of the decade.”

When Gov. Janet Mills took office last year, she immediately headed down a very different path. In February, Mills ended a moratorium on wind farm development and in April she restored net metering. In June, a new law expanded incentives for heat pump installation and in September she announced plans to make Maine carbon-neutral by 2045. Additional clean energy and energy efficiency proposals are working their way through the Legislature, Wilby said.

In this changing atmosphere, Dumsch hopes the Ecology School’s new campus can help show what can be done and pave the way for future projects.

An installation of more than 700 solar panels is designed to generate at least 105% as much energy as consumed by the facilities, making the whole development a net-positive power generator. Though net-positive buildings are a rarity in the United States, they are a growing trend globally, particularly in Norway.

The reinstatement of net metering in Maine has been essential to the plan, Dumsch said.

“On the net metering end we were really sweating bullets,” he said.

A 9,000-square-foot dormitory and 7,000-square-foot dining commons will be built with Maine wood; one company even pursued Forest Stewardship Council certification specifically so it could supply trusses to the project, said Jesse Thompson, partner at Kaplan Thompson Architects, part of the design team.

The Living Building Challenge rules prohibit combustion, so the kitchen will be almost entirely electric, using modern induction cooktops instead of gas. The school, however, got a waiver that allows it to include a wood-fired oven for cooking pizza and bread a few times a week using only wood from the property.

The process has taught the designers valuable lessons about building sustainably, Thompson said. Because the standards do not allow the use of chromium or PVC, both of which are incredibly common in building materials, the team has research alternatives; to replace electric wires coated in PVC, for example, they found a kind of PVC-free wiring used in airplanes and subways.

The architects have also had to learn to rein in their desires to create complex structures, Thompson said. The most energy-efficient shape, they’ve realized, is a plain box.

“Our buildings have gotten more simple and elegant the longer we’ve worked on the project,” he said.

Because the requirements of the Living Building Challenge are so detailed and touch every part of the construction, every contractor and subcontractor on the project is learning more about sustainable building and expanding their knowledge, Thompson said.

Though many of Maine’s policies have in recent years worked against projects like this, the state does have a strong history of building highly energy-efficient homes. The passive house standard, a designation that calls for extreme reduction in energy use, has been popular in the state even without strong incentives. A culture of Yankee frugality coupled with the high energy use a cold winter can demand, Thompson said, have made passive house construction naturally appealing.

This trend has worked to the Ecology School’s advantage because there is already a strong base of energy efficiency knowledge among the state’s architects and builders.

Construction on the Ecology School is expected to be completed in October 2020. Dumsch hopes people coming to experience the center’s residential programs will be able to see that eco-friendly living may require change, but it doesn’t need to be scary.

“Change is hard for people,” Dumsch said. “We can create a comfortable, healthy, happy future, but it’s going to be different from right now.”