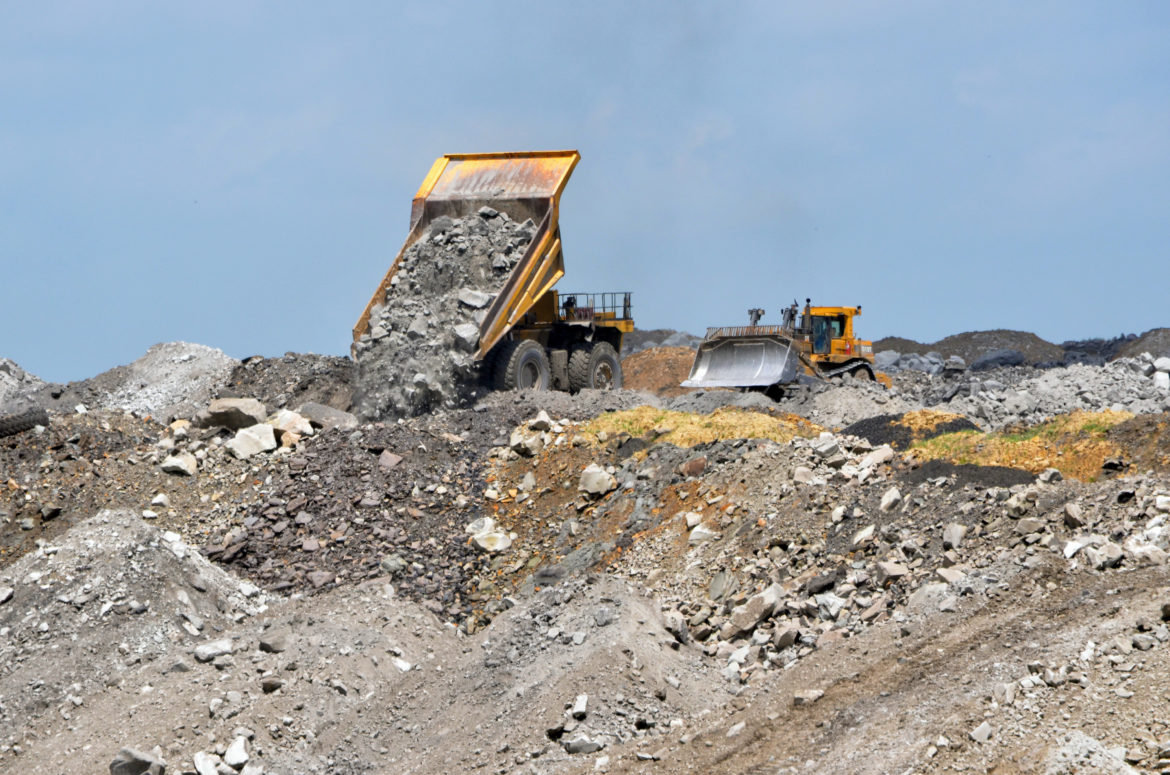 Miners dump overburden at a coal mine in downstate Illinois.

“They’re trying to cut regulations and to cut corners”: Experts see an Illinois water permit fight as a sign of things to come for the struggling coal industry.

A southern Illinois coal company’s fight to dump mine water into a nearby river is a sign of things to come, experts say, as the industry looks to cut costs to stay afloat amid worsening market conditions.

A recent report by the Institute for Energy Economics and Financial Analysis (IEEFA) predicts coal production in the Illinois Basin, which underlies Illinois, Indiana and western Kentucky, will largely disappear within two decades. The area is particularly at risk because its coal is burned in power plants and not used for industrial purposes like steel-making, the report notes.

“They’re trying to cut regulations and to cut corners,” IEEFA energy data analyst Seth Feaster said of the coal industry. “Whatever they can do to try to cut their costs, they’re doing, because that’s the only way they can stay competitive.”

In southern Illinois, coal mining company Williamson Energy LLC is embroiled in a battle with locals and environmentalists over a permit it has requested to dump water from its Pond Creek Mine into the Big Muddy River, a Mississippi River tributary.

Albert Ettinger, a lawyer who specializes in water pollution issues and is working with the Sierra Club on the fight, argued these drastic measures are too burdensome on the local environment.

“The Big Muddy is far from a pristine river,” Ettinger said, “but it would recover if we quit doing bad things to it.”

The draft of the permit, which Williamson needs to obtain under a framework created by the federal Clean Water Act, would allow it to pump up to 5,000 gallons per minute through a 12.5-mile pipe into the river. Ettinger’s main concern is the elevated level of chloride, which is toxic to aquatic wildlife, that the permit would allow. The discharge would also likely be high in sulfate and could stir up historical pollution that has settled in the river.

State inspection reports obtained by local residents via public records requests and shared with the Energy News Network revealed a history of apparent violations at the mine, including exceedances of water quality standards and inadequate monitoring. A number of nearby landowners also complained of unpermitted, off-hour discharges from the mine.

The Illinois Environmental Protection Agency, which is reviewing the permit application, did not respond to requests for comment. At a public hearing on Dec. 18 where a packed house turned out, largely in opposition to the permit, representatives from the agency agreed to look into concerns over the company’s reporting.

There’s no set timeframe for the state to make a final determination on the permit, although written comments can be submitted until Jan. 17.

In addition to the mine’s environmental problems, its opponents question whether Williamson and its related companies are even solvent and able to continue operations.

Williamson is a wholly owned subsidiary of Foresight Energy LP, which was suspended from trading on the New York Stock Exchange in November due to “abnormally low” prices. In December, Foresight received an extension on a deadline to make debt payments. Additionally, Murray Energy Corp., which is in bankruptcy proceedings, holds a controlling interest in Foresight.

On behalf of Foresight, Jason Witt, an assistant general counsel with Murray, declined to comment.

Even if Williamson is ultimately awarded the discharge permit, the future of the Illinois Basin, which accounted for nearly 15% of all U.S. coal production in 2018, remains unclear.

IEEFA’s coal production analysis found at least 15 coal plants around the country that buy from the Illinois Basin have closed or are scheduled to between 2019 and 2024.

“These threats are already having a major impact in the region,” wrote the report’s authors, Feaster and transition policy analyst Karl Cates. “Just in the past year, producers have closed or idled mines that produced almost nine million tons of coal in 2018. Further closures are likely, both in the near- and long-term.”

Phil Gonet, president of the Illinois Coal Association, pushed back on the study’s findings, pointing to the state’s relatively strong production figures in recent years. “In a market that’s shrinking, the low-cost producer is going to prevail,” he said, “and our coal operators have proven over the last several years at being pretty good at that.”

While Powder River Basin producers in Wyoming and Montana have been stymied in attempts to build new export terminals on the West Coast, Gonet said Illinois coal can be shipped down the Ohio and Mississippi Rivers to access New Orleans’ port.

With the vast majority of Illinois coal sold outside the state, though, a major challenge is finding in-state purchasers in a deregulated electricity market. “It’s a lost cause in Illinois,” Gonet said.

He and Bruce Stevens, president of the Indiana Coal Council, both said their organizations support the Federal Energy Regulatory Commission’s resilience docket that could prop up coal power. “We believe coal should be valued for its reliability and resiliency and in particular for being a source of secure on-site fuel. … We are hopeful FERC will take meaningful action,” Stevens wrote in an email.

Representatives of the Kentucky Coal Association, where the state’s coal production plummeted roughly two-thirds over the past decade, did not respond to requests for comment.

And while the industry fights to stay afloat, many states are shrinking their environment departments, raising concerns over the potential for decreased oversight.

Between 2008 and 2018, 21 states cut at least 10% of their staff regulating polluters, according to a December report published by the Environmental Integrity Project, an advocacy group created by former U.S. Environmental Protection Agency attorneys.

“Illinois imposed the deepest staffing cuts to its environmental agency,” the report found, identifying a cut of 38%, or 389 positions, in the decade studied. While Indiana’s state budget increased, its Department of Environmental Management saw its funding cut 20%. Kentucky also saw cuts, although smaller, to its environmental staffing and budget.

Even if this trend ultimately leads to more relaxed oversight, Feaster from IEEFA predicted U.S. coal production will continue to decline. “There’s very little evidence that this is having much of a countervailing influence on the economics of how this is unfolding,” he said.

Tabitha Tripp, an environmental activist in southern Illinois, got involved in the fight against Williamson because friends living on the banks of the Big Muddy River were concerned that mine waste would mix with or worsen floodwater. She believes a lack of regulatory enforcement and political will has led to a depressed economy and community health issues, not the riches promised by the mining industry.

“We’re not all getting wealthy on it. We’re suffering,” Tripp said. “And that, sadly, is what we’re asking the state to consider when we’re asking to keep it in the ground.”