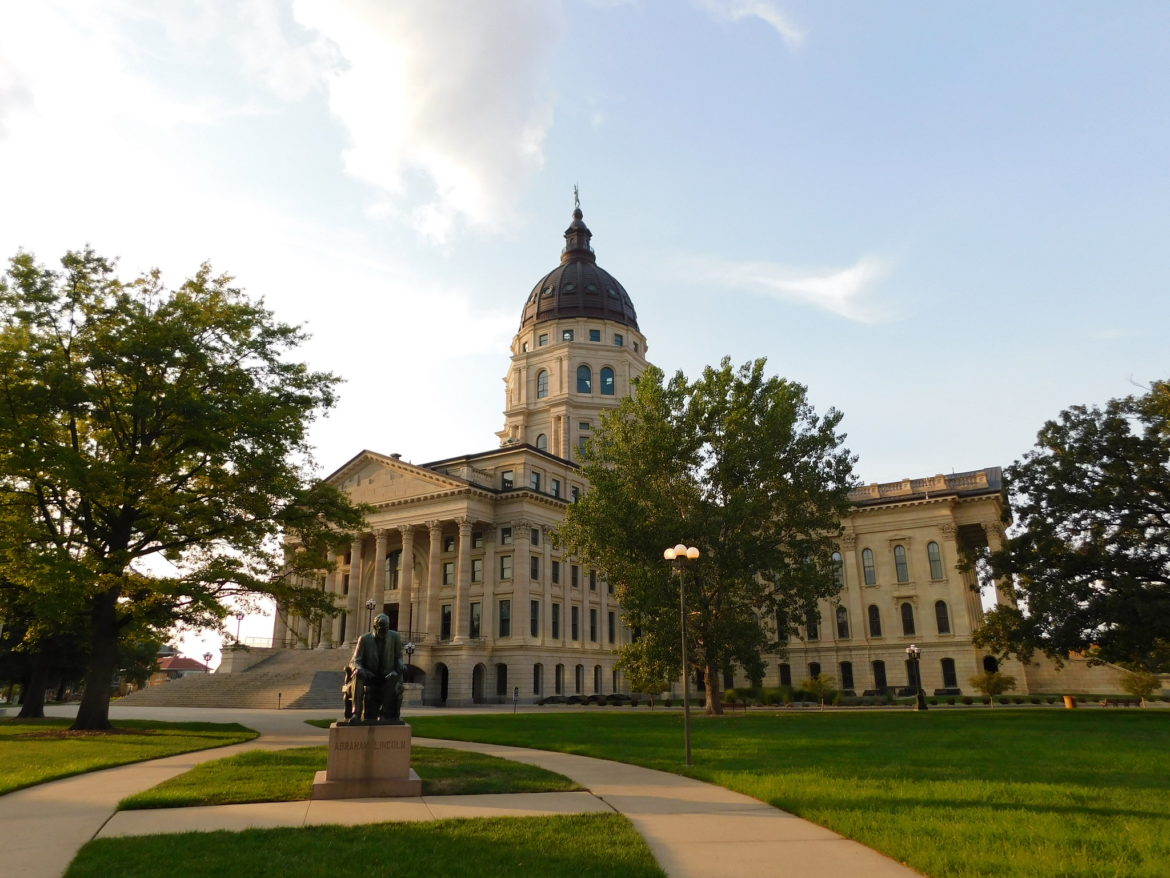 The Kansas Statehouse in Topeka. A recent report to state lawmakers offers several recommendations to address the state's electricity costs, among the highest in the Midwest.

Kansas clean energy groups and the state’s largest utility say they are hopeful a new report to state lawmakers will prompt new legislation this session.

“We’re pretty thrilled with it,” said Dorothy Barnett, executive director of the Kansas Climate and Energy Project, which has previously advocated for many of the recommendations, such as allowing refinancing of aging coal-fired power plants.

The state’s largest utility, Evergy, supports most of the major recommendations, too, according to Chuck Caisley, the company’s senior vice president of marketing and public affairs. He said he expects and hopes to see the Legislature take up the report in coming weeks.

“The Legislature asked for a report because they do intend to look at these things,” he said. “I hope to get a full-throated discussion of all 300-some pages of the report. It bolsters the perspective that there are things we can do in Kansas that will … take us into the future.”

The Legislature last year passed a bill calling for a study of Kansas electric rates because they have been among the highest in the Midwest in recent years. It seemed briefly that the study might be derailed due to a partisan dispute over the selection of a consultant to do the $309,000 study.

Republican members of the Legislative Coordinating Council primarily wanted to hire Boston-based London Economics. Democrats largely favored another firm, E3. They eventually arrived at a compromise: London Economics would do the first part of the report, which was made public last week; E3, based in San Francisco, will do the second phase, addressing more specific technologies such as microgrids and electric vehicles. It’s expected to be issued this summer.

Zack Pistora, who lobbies for energy efficiency and renewables on behalf of the Sierra Club, said he was pleased to see the report express so much affirmation for policies generally favored by clean energy groups.

“This is a very good, in-depth study that validates a lot of things we have been saying for a while now,” Pistora said, citing the state energy plan and securitization recommendations.

A securitization bill was introduced last session but made no headway. Securitization allows a utility to issue ratepayer-backed bonds to, for example, finance repairs after a natural disaster or pay off stranded assets. Because utility bill payments are considered a reliable source of income to repay bonds, the interest rate for these bonds tends to be relatively low. Clean energy promoters see it as a way to finance the early closure of coal-burning power plants.

“I think it’s the best way we can immediately lower our electricity prices,” Pistora said. “Transitioning from outdated energy infrastructure to the new, most cost-effective energy will help save ratepayers money.”

More broadly, Pistora said the report supports “a little more scrutiny” of utilities by pressing for planning in the form of integrated resource plans — a vision for how the utility will meet its expected energy demand and annual peak, along with some margin, through supply- and demand-side resources. Many states require the plans of their investor-owned utilities.

Caisley, of Evergy, said the company has no objections to the integrated resource planning recommendation because it already produces them in Missouri, where the utility also operates. Those reports already cover Kansas operations, he said, but Evergy doesn’t file them with Kansas regulators because there is no structure for doing so.

The company supports another recommendation in the report to explore performance-based ratemaking, in which utilities could collect additional revenue for meeting certain targets independent of energy sales. The company even proposed it in Missouri several years ago, Caisley said.

“We think there’s a lot of value to performance-based ratemaking. It has the advantage of giving certainty around recovery for utilities, while making sure utilities are adequately addressing the things customers care about the most.”

He said Evergy also supports the development of a state energy plan and the passage of securitization legislation.

“We think a statewide energy policy that can be vetted and give a long-term view towards sustainability and cost is a very important thing. We are very supportive of that,” Caisley said. On securitization, “we wouldn’t want to see it mandated, but having it as an option is a good tool.”

Caisley said the report’s support for an energy plan “is making Gov. [Laura] Kelly look prescient because several months ago she said she thought that was important. She’s going to convene stakeholders and hopefully [this] week we’ll hear some more.”

The governor announced at an October meeting of clean energy proponents that she intended to pursue an energy plan. Barnett, of the Climate and Energy Project, called the consultant’s support for an energy plan “an important validation for the governor. I hope it speeds up the process.”

Although some of the recommendations could move forward at least in theory without legislation, Barnett and Pistora agreed that laws would ensure that the report is translated into action. Pistora said he’s confident the Legislature will take action.

“I just feel like the Legislature hired the consultant, and with this big emphasis from the Legislature to bring down electric rates,” he said. “I see legislators making this worth everybody’s money and implementing a lot of these suggestions.”