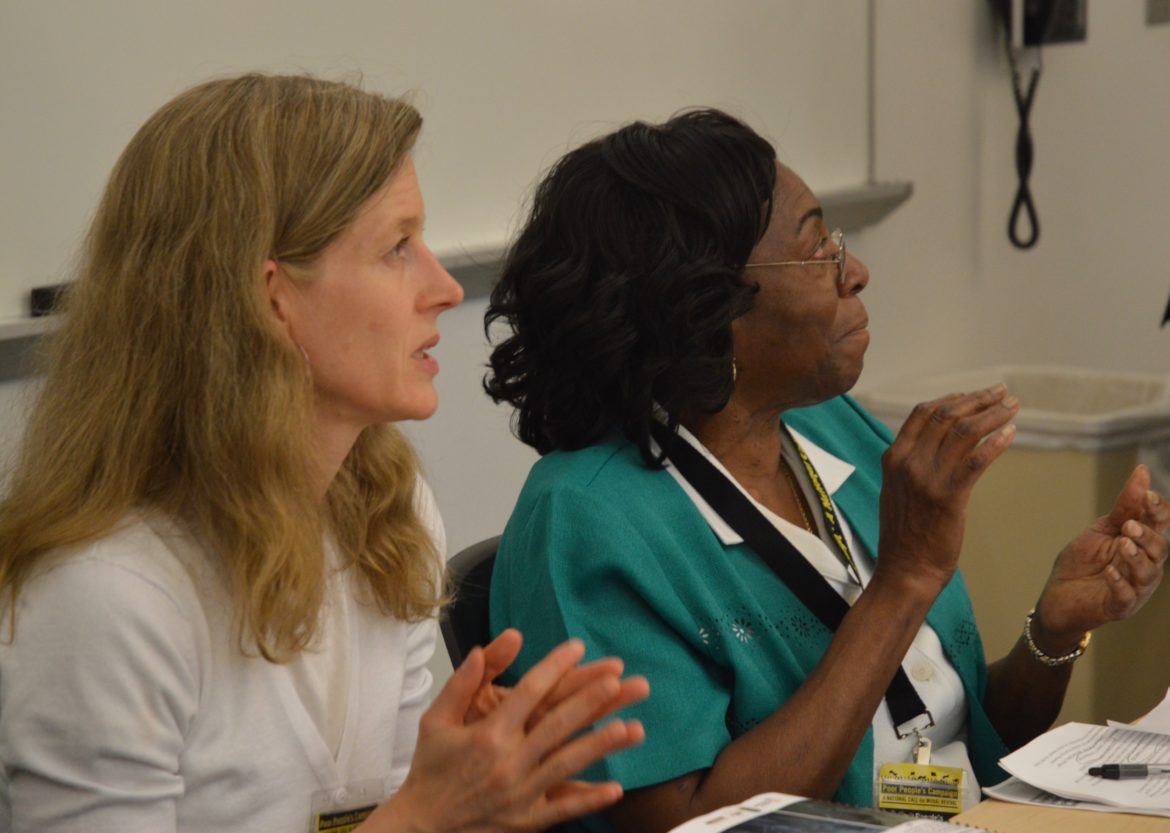 Ella Rose, right, is seated next to Al Gore’s daughter, Karenna Gore, of the Center for Earth Ethics. Both served on a June panel in Washington, D.C., organized by the Poor People’s Campaign.

The ruling is potentially a huge setback for Dominion Energy, which will now reapply for the permit to build the Atlantic Coast Pipeline.

UNION HILL, Va. — What retiree Ella Rose describes as her “most wonderful birthday present ever” was belated by four-plus weeks. But it was so worth the wait.

A federal appeals court decision Jan. 7 to toss out a state permit for construction of a natural gas pipeline compressor station roughly one-third of a mile from her home was announced exactly one month after the activist’s 76th birthday.

“I am so happy and elated and surprised,” she said, recalling the phone call she received last week from Chad Oba, co-founder and president of the Friends of Buckingham. “We were screaming in each other’s ears and I was the happiest person in the world. I’m still over the moon and I can’t come down.”

Rose’s number was the first one Oba dialed once she received the initial “We won!” call from a Southern Environmental Law Center attorney representing her nonprofit in its case against the Atlantic Coast Pipeline and the Virginia Air Pollution Control Board.

“I was just flabbergasted. I couldn’t stop jumping up and down,” Oba said about the call she received in her kitchen. “When I called Ella and she apologized for shouting, I told her, it’s something to scream about. Go right ahead.”

The momentous decision by a three-judge panel from the Richmond-based 4th U.S. Circuit Court of Appeals is potentially a huge setback for Dominion Energy’s pipeline and a gargantuan gain for environmental justice in a state where that topic is only recently being broached.

Union Hill, a tiny rural community in Buckingham County settled after the Civil War by free blacks and formerly enslaved people, has been tracked by pipeline opponents nationwide as a test case. It’s 70 miles west of Richmond.

“I really do feel as if justice was served,” Oba said. “The judges were very thorough and read everything very closely. Nothing got past Judge Gregory.

The judges basically reprimanded the seven-member board for following the Department of Environmental Quality’s lead and choosing to ignore reams of substantive evidence that petitioners had submitted about the pumping station’s impact on a vulnerable community.

For instance, Dominion and the board didn’t acknowledge the community’s makeup as majority African American. Many of the residents are elderly and suffering from respiratory and heart ailments. As well, the board didn’t account for either the 60 homes within a mile of the 68.5-acre site for the compressor station or the impact of the noise and pollutants emitted during its construction and operation.

Dominion claimed the wooded acreage near Rose’s house on Highway 56 was ideal for the compressor station because of a necessary connection to Transco, a separate and existing natural gas pipeline.

The permit application stated that four turbines — with a combined 58,162 horsepower — would burn gas 24/7 to pump natural gas through the pipeline. The board failed to even consider replacing those turbines with technology such as electric motors, which would have eliminated the on-site air pollution.

In the fall of 2018, the board opted to delay its vote on the compressor station permit because several members wanted more information on environmental justice issues. That November, Democratic Gov. Ralph Northam caused an uproar in anti-pipeline quarters when he replaced two board members who had voiced concerns about the disproportionate harm to Union Hill. The reconfigured board’s final vote for approval came in January 2019.

“What matters is whether the Board has performed its statutory duty to determine whether this facility is suitable for this site, in light of EJ [environmental justice] and potential health risks for the people of Union Hill,” the judges wrote. “It has not.”

Virginia law contains a Commonwealth Energy Policy, the judges wrote. It is designed to ensure that development of new, or expansion of existing, energy resources or facilities does not have a disproportionately adverse effect on economically disadvantaged or minority communities.

The judges criticized the board for relying on air quality standards and dismissing environmental justice concerns.

“Even if all pollutants within the county remain below state and national air quality standards, the Board failed to grapple with the likelihood that those living closest to the Compressor Station — an overwhelmingly minority population according to the Friends of Buckingham Survey — will be affected more than those living in other parts of the same county,” they said.

That door-to-door survey, which involved local residents and a University of Virginia adjunct professor, was carried out to challenge faulty census data provided by Dominion.

“Environmental justice is not merely a box to be checked, and the Board’s failure to consider the disproportionate impact on those closest to the Compressor Station resulted in a flawed analysis,” their opinion stated.

The appeals court’s decision marks the eighth time since May 2018 that a federal court or federal agency has revoked or suspended permits for the $7.5 billion pipeline, according to SELC numbers. If built, it would bisect Virginia for roughly 300 of its 600 miles to move hydraulically fractured natural gas from West Virginia to North Carolina.

“We’re all breathing a little easier now, but we have to celebrate quick,” Oba said, adding she will learn next steps at a debriefing with SELC attorney Greg Buppert. “Dominion is probably huddling now as we speak.”

Dominion will indeed be reapplying for the permit. In doing so, the utility must reconcile the shortcomings laid out by the judges.

“We will work with the state to resolve the procedural issues identified by the Court and are confident this can be completed in a timely manner,” Dominion spokeswoman Ann Nallo said via email.

Nallo said that access to the pipeline’s natural gas would not only boost the manufacturing economy in the Hampton Roads region of Virginia and in eastern North Carolina, but also support “the rapid expansion of renewables” in the two states.

Conservationists have long doubted that latter point, stating that the quickest path to renewables is to simply build more wind and solar power.

Oba, 73, said devoting the last 5 and a half years of her life to defeating the pipeline and the proliferation of fossil fuel infrastructure “is totally worth it on so many levels.” It’s both exhausting and exhilarating to keep a grassroots organization going and develop relationships far beyond Union Hill, she added.

It has been a whirlwind of a week as members of the Friends group have attended numerous rallies and the Commonwealth Prayer Breakfast at the Richmond Convention Center, where Judge Gregory spoke. The breakfast is a tradition on the day the General Assembly opens its session.

Last Friday, Oba and Rose trekked to Washington, D.C., with two carloads of Virginians to share their victory with Jane Fonda at the Oscar-winning actor’s last Fire Drill Friday on the U.S. Capitol grounds.

The 82-year-old moved temporarily to the nation’s capital more than four months ago to dedicate her time to organizing rallies and teach-ins to push the federal government officials to address climate change. Fonda, other celebrities and everyday residents attending the drills have been arrested numerous times.

“We made a last-minute decision to go, and I called Ella and she said yes she would go, too,” Oba said. “It was great. We marched and chanted. We got really energized by that.”

Rose was thrilled to have a face-to-face meeting with Fonda, who was familiar with the Union Hill controversy.

“She’s been advocating for so long and I feel the same way she does,” Rose said. “I’m for the environment and environmental justice in my neighborhood.”

Rose credits Oba, “my rock and salvation,” for convincing her to start speaking out against the pumping station and the pipeline in 2014.

She was further inspired last winter when the Rev. William Barber II and former Vice President Al Gore led a meeting at Buckingham Middle School. In front of 700-plus attendees, they criticized Northam and Dominion for condoning acts of environmental racism in Union Hill.

Both Gore, a longtime environmentalist and founder of the Climate Reality Project, and Barber, a North Carolina social justice advocate who leads the Poor People’s Campaign, visited Rose’s house, too.

“When Rev. Barber came and blessed my house, that gave me the incentive to keep on doing what I’m doing and the power to give it my all,” said Rose, who has delivered her message dozens of times up and down the East Coast.

Rose cherishes the quiet, beauty and wildlife that grace the woods around the one-story house with gray siding and burgundy trim she was finally able to retire to in 2012. She had left her native Nelson County, adjacent to Buckingham, decades ago to pursue a food service career in Washington, D.C.

She emphasized that she didn’t want to be selfish and fall silent now just because the appeals court granted a reprieve. She wants to right wrongs beyond her own backyard.

“I’m not going to stop. I’m on a mission,” Rose said. “I wouldn’t wish this compressor station on anybody else’s neighborhood. I want everybody to be able to live in peace.”