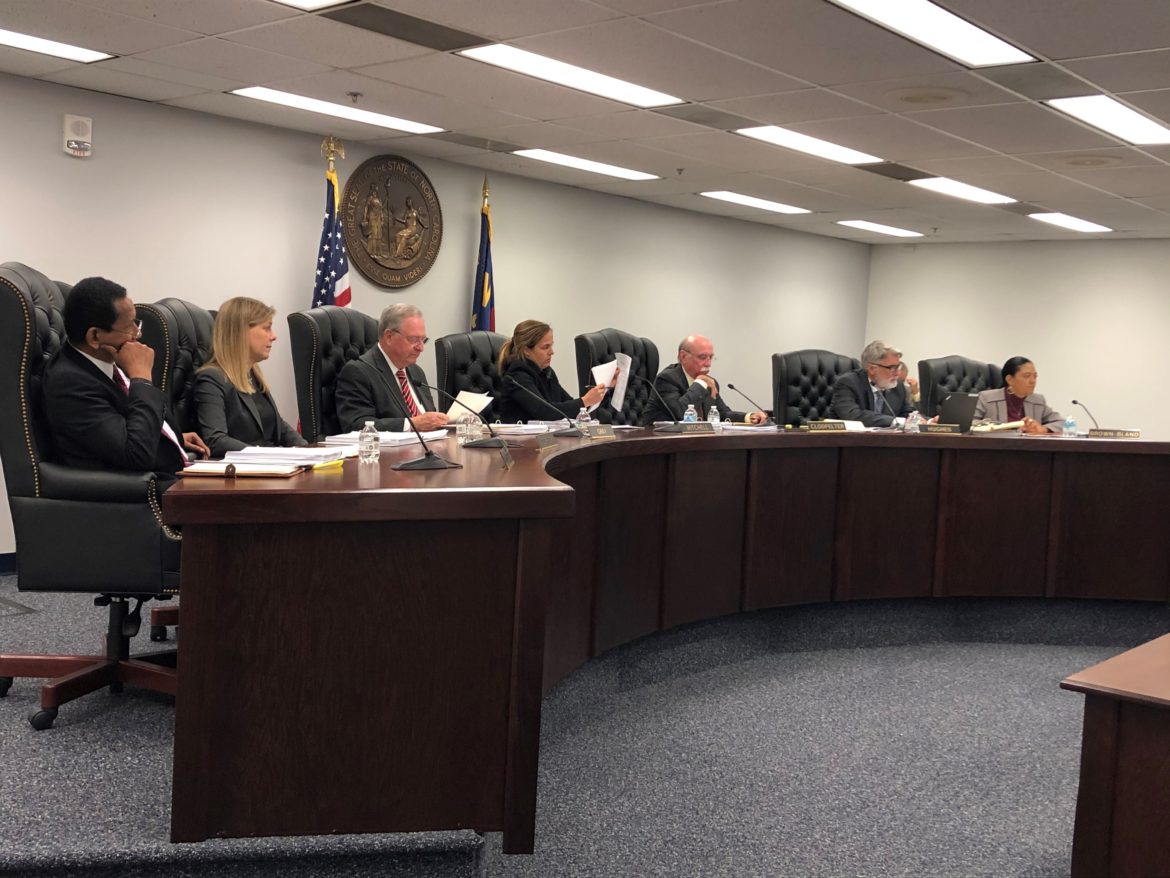 The regulatory body is expected to rule on key orders this year related to electric vehicles, rate hikes and other issues.

Editor’s note: This story has been updated to include a comment from Duke Energy.

The North Carolina Utilities Commission is at full strength at last, having spent almost half of 2019 with four commissioners instead of seven.

Now filled almost entirely with appointees from Gov. Roy Cooper, a Democrat, the panel could steer Duke Energy and other utilities in its purview in a new direction.

But while key orders are expected this year on electric vehicles, rate hikes, and other issues, advocates say many of the commission’s most consequential decisions on the state’s energy future will come in 2021.

And while this crop of regulators may be more inclined than their predecessors to push Duke toward more renewables and less coal and gas, looming energy policy questions will still have to be resolved by the General Assembly — not regulators.

The oldest regulatory body in the state, the North Carolina Utilities Commission has long set rates and ensured a steady supply of electricity and gas for customers — usually by permitting new power plants from which Duke could profit.

But in the last decade, the worsening climate crisis and the success of renewable energy has begun scrambling the traditional electric utility model and with it the traditional role of regulators.

A 2007 state law requiring a certain amount of renewable energy — combined with tax credits and a federal requirement that monopoly utilities buy from small power producers — sparked a wave of solar farms across the state that have had to be connected to Duke’s grid.

As appliances and buildings have grown more efficient, electricity demand has flattened, raising questions about whether new power plants are needed. An uptick in severe rainstorms has Duke and many communities reaching for microgrids and other strategies to stave off power outages.

Cooper’s 2018 executive order on climate change has also cast doubt on Duke’s plans to build over two dozen new fossil gas units in the next 15 years and keep several of its coal plants running past that time.

Critics said previous commissioners too rarely exerted their authority over the clean energy transition and too frequently deferred to Duke. Advocates successfully pushed Cooper to replace the commission’s chair and name three new members to the panel last May.

But the Republican-led General Assembly, which must confirm the members, didn’t do so until the last day of its regular 2019 session, Oct. 31. One of the new appointees didn’t resign from his state Senate post until earlier this month.

It’s not clear why lawmakers waited so long to act; no-one with business before the panel wanted it to be shorthanded. “Duke Energy is pleased the (Commission) is back to full strength,” spokesman Randy Wheeless said. “The limited number of commission members in 2019 was not ideal for getting work done quickly.”

‘Changing the way of doing things’

The commission’s first meeting with a full roster was on Jan. 8, with former Durham Sen. Floyd McKissick the latest addition. The format could be a new trend for the quasi-judicial panel: calling in experts to exchange ideas, but not under oath. The hope is Duke might incorporate the information into later fillings.

“There seems to be an appetite among the current commissioners for more information and for changing the way of doing things,” said Gudrun Thompson, a senior attorney with the Southern Environmental Law Center. “I’m anticipating that we might see this technical conference format a little more often.”

Appointed by Cooper in 2017 to a six-year term, commissioner Dan Clodfelter chaired the confab and spent the most time peppering experts with detailed questions about the meeting’s topic: reserve margins, the amount of excess generation capacity the company should plan to have in case of unusually high demand.

But the three newest commissioners also piped up. Kimberly Duffley, a former staff attorney for the commission, asked about trends in other states. Jeffrey Hughes, who had directed the Environmental Finance Center at the University of North Carolina School of Government in Chapel Hill, questioned Duke on how it calculated and communicated its need for reserves.

Even McKissick, who had only become official 24 hours earlier, contributed his own pointed questions, asking why Duke’s rationale for calculating reserves was better than that of its critics. “It’s great to see commissioners asking good questions,” Thompson said after the meeting, “and really engaging the issues.”

The panel is conducting similar informational sessions on battery storage, which advocates say could impact a number of upcoming dockets, from the utility’s 15-year plans to how to treat solar-plus-battery projects seeking interconnection to the Duke grid.

“I’m very happy the commission has opened this informational docket” on battery storage, said Peter Ledford, general counsel with the North Carolina Sustainable Energy Association. But as for the commission’s ruling, “I think it’s going to be in multiple dockets, multiple issues, across the board.”

Many solar projects already connected to Duke’s grid want to add batteries to their portfolio. “The commission recognizes that costs are coming down. There’s developer interest in storage,” said Lauren Bowen, a senior attorney with the Southern Environmental Law Center who leads the group’s solar power work. “The time is now to figure this out.”

The commission has also plunged into more traditional work, beginning public hearings around the state on Duke’s request to raise electric rates for its two North Carolina utilities.

The utility serving Charlotte and much of the Piedmont has proposed raising residential rates 6% to cover storm recovery, coal ash cleanup, and other items. The one serving Asheville, Raleigh, and southeastern North Carolina has proposed a 14% increase to recoup coal ash costs, storm recovery expenses, and the construction of a new gas power plant in Asheville. It also proposes shuttering two coal plants years earlier than planned.

“The two rate cases are in a lot of ways the same issues that were litigated two years ago,” Ledford said.

But while Duke hasn’t proposed raising the minimum service charge or a separate fee for its multi-billion-dollar grid improvement plan — as it did in 2017 rate cases — the commission’s judgement on Duke’s formula for calculating the minimum bill fee could be telling.

“They are using the same underlying methodology that would support a bigger increase,” Thompson said. If the commission accepts that calculus, it could set the stage for hikes to the minimum service charge down the line.

In a split decision in 2018, commissioners allowed Duke to pass on most of its coal ash clean up costs to customers. But only one member from the majority is still on the panel, and Attorney General Josh Stein is challenging the matter in the Supreme Court.

“I believe that Duke’s shareholders should have to pay their fair share of the total cost,” Stein said in a statement announcing his appeal. Allowing the utility to earn interest on their expenditure, he added, “is also unfair and unacceptable.”

Whether the panel sides with Stein or Duke could determine who pays not just the $1 billion the utility is requesting in this rate case, but the billions of dollars more Duke will spend over the next decade following a landmark settlement with the state to excavate 80 million tons of ash.

Regulators are also expected to rule soon on Duke’s proposed $76 million electric vehicle pilot program, in which the company would install and operate over 700 charging plugs, buy 85 electric transit and school buses, and provide rebates to customers who install private charging stations. The proposal has split clean energy interests, with some grateful for the potential new infrastructure and others sounding the alarm about Duke expanding its monopoly. The state’s consumer advocate, the Public Staff, is opposed.

Advocates also say the panel has a role to play in the Clean Energy Plan Cooper released in conjunction with his climate executive order. The plan calls for a 70% reduction in power sector pollution by 2030 and carbon neutrality by 2050. “The commission has already asked Duke to model compliance with the plan,” Thompson said. Given the amount of new gas plants Duke plans, she said, “they’re going to have to make radical changes.”

But the two biggest choices the commission will make won’t likely come until 2021. Though the panel will try to influence the 15-year plan Duke submits that’s due Sept. 1, they won’t rule on it until the following year.

The ongoing debate over “avoided cost” — what the utility would spend to produce electricity itself rather than buy it from an independent developer — will follow a similar timeline. The commission has yet to issue its full rationale for accepting Duke’s solar integration charge, first proposed in 2018 and still the subject of dispute. A fee of some sort is warranted, Ledford said, but, he added, “the study underlying the solar integration charge itself is flawed.”

The commission is expected to complete its avoided cost order this year, and that should impact Duke’s next filing on the metric, due in November. But the panel won’t rule on the utility’s proposal until months later.

These upcoming decisions notwithstanding, the utilities commission is still constrained by state law. It can do little to require Duke to comply with Cooper’s Clean Energy Plan without legislative approval, and most doubt it can act unilaterally on growing calls for more competition in the state’s electricity market.

Then, too, there is the 2017 law that doubled solar energy in the state. While Duke is likely to hit the law’s overall solar targets, key elements of the statute have been duds. A proposed community solar program has yet to materialize, for example, and few have taken advantage of a solar leasing option.

While the commission could force Duke to redesign programs like community solar altogether, most observers say they are flailing because of cost constraints in the law itself, not because of how it’s being implemented.

“There’s nothing the commission can do about the underlying statute,” Ledford said. “That’s going to have be fixed at the legislature.”