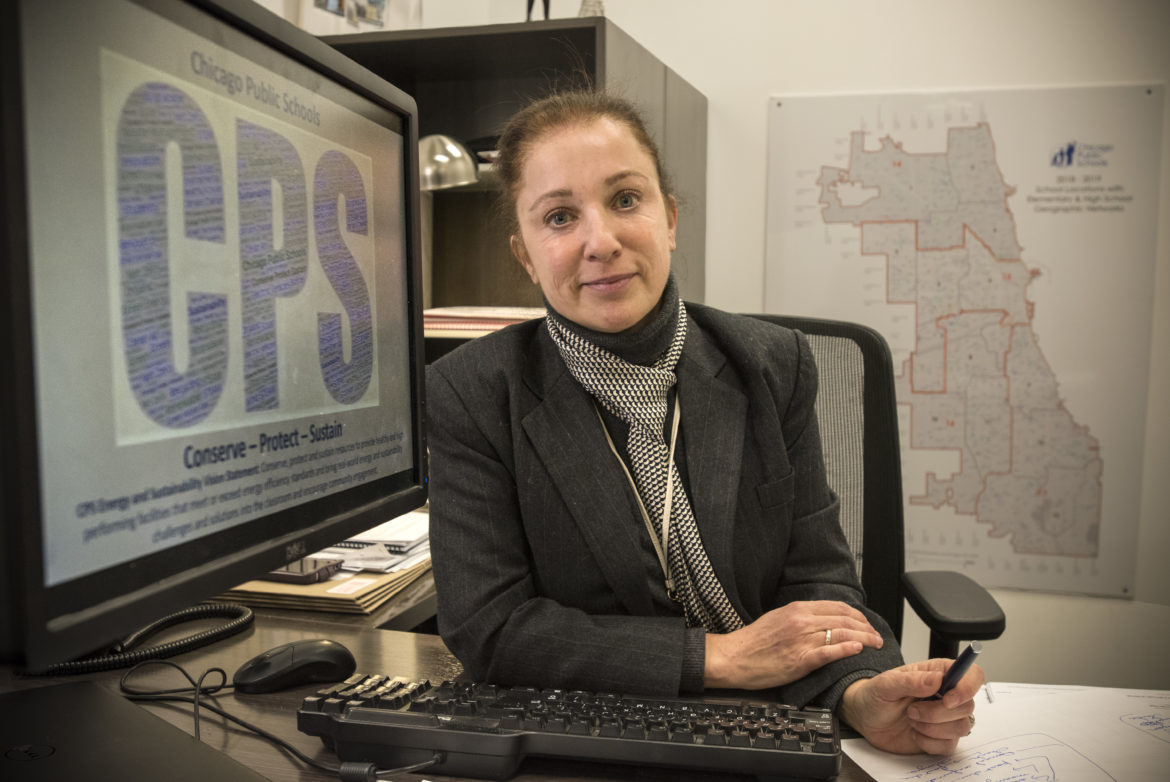 Sandrine Schultz, a former Department of Energy official, is the sustainability director for Chicago Public Schools.

The district went nearly four years without a sustainability leader before hiring former Department of Energy official Sandrine Schultz in 2019.

Seventeen-year-old David Pavletic had two questions for Chicago Board of Education members last spring: Could the Board provide a copy of the Chicago Public Schools’ utility bill for Whitney Young High School, where he and several classmates hoped to launch a solar energy project? And, “Who exactly at CPS is in charge of sustainability strategy?”

The district finally hired Sandrine Schultz to fill that position in May. Now halfway through her first year in the role, Schultz is working to identify gaps in CPS’ energy strategy that may have cost the cash-strapped district hundreds of thousands of dollars or more during the nearly four years the position was vacant.

Schultz, who previously managed energy projects for the U.S. Navy and Department of Energy, is tasked with reducing energy usage across CPS’ roughly 700 facilities. She’ll also oversee the district’s nutrition and food procurement policies and manage its food waste, recycling and composting programs.

Schultz’s first order of business is assessing current energy consumption at CPS facilities. To do so, Schultz said she’s been touring schools across the city and analyzing utility data.

“Are we efficient? Are we wasting energy?” she said. “Are our facilities in good condition?”

Schultz is also working to make sure the energy usage data CPS receives from utilities is accurate. That task alone could help cover the salary that Schultz will earn this year.

Anisa Heming, director of the Center for Green Schools at the U.S. Green Building Council, said that when Detroit’s school district hired someone for a position like Schultz’s, he spent his entire first year finding discrepancies in the district’s energy bills. The savings easily covered his salary.

“There’s definitely room for improvement, and ultimately that’s what the program is going to identify,” she said.

From late 2015 until Schultz’s hiring in May, CPS had been one of the only large school districts in the country without a sustainability director, Heming said. For clean energy and environmental advocates, the vacancy raised questions about how the nation’s third-largest school district was preparing for a greener future.

In 2017, Kyra Woods of the Sierra Club’s Illinois chapter said she tried to work with the district on a renewable energy initiative but moved on after being passed along to various departments and employees.

“There was some real concern about how are we going to ensure that CPS buildings — that our greater public schools — are involved in this conversation about clean energy?” she said.

In the meantime, school districts in other large U.S. cities have beefed up their sustainability offices. Some cities, like New York City and San Francisco, now have more than a dozen staff members working on sustainability issues across their public schools, Heming said.

Woods said the concerns about CPS’ vacancy mirrored gaps in Chicago’s citywide approach to energy and environmental issues. Despite pledging to transition all city buildings to 100% renewable energy sources by 2025, former Mayor Rahm Emanuel was criticized for dissolving the city’s environment department, leading to lax enforcement of hundreds of factories that release toxic pollutants.

It’s difficult to measure the impact caused by CPS’ lack of energy and sustainability leadership over the past four years. But looking at just one small piece of the district’s past energy conservation efforts suggests that the vacancy has had a cost.

Participating schools received a portion of the savings to fund energy efficiency projects, such as installing light sensors and conducting building repairs. From 2010 to 2014, schools earned $692,000 through the program.

Records available on CPS’ website indicate that the program ended in 2014 or 2015, eliminating an incentive that helped schools reduce energy consumption and costs.

Schultz is now reviewing the program to determine whether it should be reinstated.

As such initiatives demonstrate, districts are smart to invest in sustainability staff and programs that help schools conserve energy, Heming said. As of 2014, K-12 schools in the U.S. spent more than $7.5 billion annually on energy, more than on textbooks and computers combined, according to a presentation prepared for CPS by energy consultants.

CPS did not answer a question about the district’s total electricity and natural gas spending during the 2018-19 school year.

The district’s current contracts with Constellation NewEnergy will cost up to $160 million for electricity over the next four years, plus another almost $47 million for natural gas over the same time period, according to CPS records.

CPS will also pay Dynegy Energy up to $17.5 million next year to deliver electricity to its facilities, records show.

Changing behaviors to save energy

Schultz’s role at CPS is an expanded version of the sustainability manager position that had been vacant since late 2015, shortly after Forrest Claypool took over as CPS’ CEO.

It’s unclear why it took the district several years to fill the position. Clarence Carson, who was appointed chief of facilities by current CEO Janice Jackson in October 2018, said he realized that his department lacked someone with enough knowledge on energy and sustainability.

“It was really important when filling out the core functions of the facilities team,” said Carson, to whom Schultz reports.

Schultz’s position calls for her to “embed sustainability into the culture of CPS,” according to the district’s official job description for her role. That includes with the district’s students.

This summer, Schultz connected with Pavletic, now 18 and a Whitney Young senior, and other students to discuss their solar initiative. Although the project fell through when the company the students were working with produced a costlier-than-expected proposal, Schultz continued working with the students. She shared with them a list of building changes that could help Whitney Young save energy, such as installing lighting sensors and LED lights, unplugging kitchen refrigerators and freezers during the summer, and replenishing the layer of white gravel on top of one building to keep it cooler.

Finding low-cost ways to save energy is key for someone in Schultz’s position, Heming said.

“A school system like Chicago has a really strapped budget, and when budget dollars are available, they go toward the academic side and teacher salaries and things like that,” she said. “It’s the easiest thing in the world for a school board or decision-makers to put off facilities investments because they’re sort of invisible — until they’re not.”

Eventually, Schultz said she’ll also be able to turn her attention to “any other technology that would have the schools rely less on the grid,” including sources of renewable energy.

Last year, CPS published a five-year vision plan that calls for 80% of the district’s energy usage to come from renewable sources by 2023. Reaching that benchmark will put the district on track to meet the city’s goal of transitioning all its buildings to 100% renewable energy sources by 2025, according to the plan.

The plan states that CPS will contract with renewable energy providers and install solar panels at schools, though it does not provide details on specific solar projects.

CPS did not answer a question about the percentage of the district’s current energy usage that comes from renewable sources. A CPS spokesperson said Schultz is developing an energy and sustainability management plan for the district and will also lead a task force starting this year related to the city’s renewable energy goals.

Schultz, who grew up in Belgium and taught French in Portland, Oregon, for more than six years, said she plans to continue sharing energy usage data with CPS students. She hopes the information leads to behavioral changes throughout schools, one piece of her plan to boost sustainability efforts across the district.

“She seems like she really cares,” said Suzy Schlosberg, a Whitney Young senior and co-director of the Chicago Youth Alliance for Climate Action. “Even if there are physical limitations and budgetary limitations to what CPS can do to improve energy efficiency, the fact that there is a person to make that happen and who cares is a great thing.”