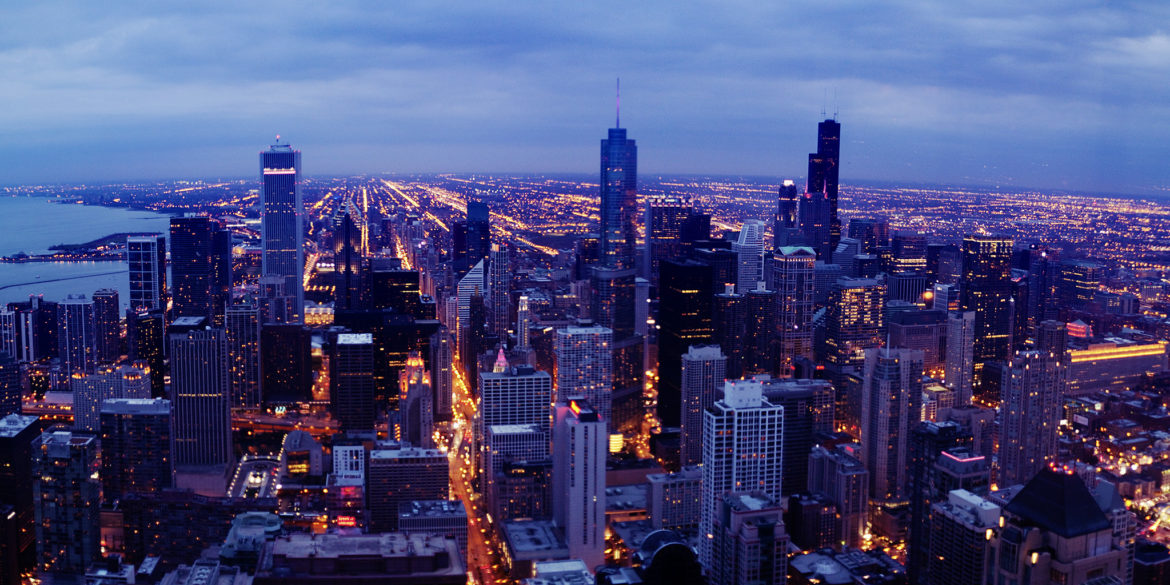 Chicago's resiliency planning earned high marks among global cities in a study from the American Council for an Energy-Efficient Economy. But living up to its promises may be a challenge.

The American Council for an Energy-Efficient Economy evaluated 66 major cities on their resiliency efforts.

Chicagoans have had to be resilient throughout the Windy City’s history, bouncing back from the 1871 Chicago Fire, race riots, and the blizzards, deadly heat waves and other climate-related events that have forced cities worldwide to adopt resiliency as a core of urban planning and policy.

Chicago got high marks among global cities for incorporating renewable energy, energy efficiency and an equity lens into its resiliency planning in a study released today by the American Council for an Energy-Efficient Economy, or ACEEE. Chicago’s resiliency plan, released under former Mayor Rahm Emanuel, is indeed ambitious, with a major focus on energy — including distributed solar, energy efficiency, vehicle electrification, and making sure the most vulnerable and marginalized communities benefit from these improvements.

But will the city live up to its promises? It will be a steep challenge in a city where community leaders have long railed against environmental injustice and historic and ongoing inequities in infrastructure, energy, buildings and transportation.

Previous Mayors Emanuel and Richard M. Daley both won accolades for their focus on energy- and climate-related innovation. But many critics saw their achievements coming in tandem with serious failures, like abysmally low recycling rates, lax oversight of polluters and Emanuel’s elimination of the Department of the Environment. Mayor Lori Lightfoot took office in May 2019 on a platform of sweeping reforms including on energy and equity.

The ACEEE survey found other cities also facing deep social and economic problems — even more extreme than Chicago’s — have shown leadership and made ambitious plans for resiliency incorporating renewables and energy efficiency: Rio de Janeiro, Santiago, Mexico City, Athens, Dakar and Ramallah, among others. The ACEEE report evaluated the resilience plans of 66 cities of different sizes and locations; most of them, including Chicago, have participated in a 100 Resilient Cities global initiative.

While Chicago is insulated from the direct impacts of sea level rise and hurricanes, it is infamous for blizzards, heat waves and flooding, so its future depends on preparing for climate change impacts along with reducing its contributions to global warming.

Ambitious efforts in efficiency and transportation

ACEEE argues that energy efficiency is also crucial to increasing a community’s resilience, since it’s easier for residents to survive in energy efficient buildings that use less energy and are more comfortable even when energy goes out, a concept known as “passive survivability.”

Chicago’s resilience plan touts its ambitious energy efficiency measures, targeting both corporate buildings and low-income neighborhoods, including a partnership with utility ComEd to make energy efficiency more accessible to low-income people. The ACEEE report rated Chicago higher for its commitment to energy efficiency than cities including Boulder, Oakland, San Francisco and Berkeley that are widely seen as environmentally conscious.

Chicago also scored well on its plans for vehicle electrification, including electrifying a quarter of the public passenger fleet by 2023. The ACEEE study notes that Chicago “seeks to electrify and retrofit commercial trucks and buses,” and “plans to leverage $20 million in federal funding to put 500 low- and zero-emissions commercial vehicles on its streets.”

A commitment to clean energy

In the ACEEE report, Chicago was one of only four U.S. cities, along with Honolulu, New York and Los Angeles, whose plan earned an exemplary rating for its commitment to renewable energy. Chicago leaders were crucial to the passage of the Illinois’ 2017 Future Energy Jobs Act, meant to exponentially increase the state’s installed solar capacity. There has been an increase in solar in the ensuing years, but the state is still nowhere near on track to meet its renewable portfolio standard goal of 25% by 2025, according to the Illinois Power Agency.

The city’s resiliency plan calls for powering the city by 100% renewables by 2050. The Chicago Infrastructure Trust in 2018 issued a request for proposals for renewable generation on city-owned lots, but it appears no projects were ever completed.

In 2013 Chicago launched the country’s largest municipal aggregation program after a vibrant campaign by clean energy and consumer groups that saw it as a way to obtain more of the city’s energy from renewables. The city contracted with provider Constellation Energy Services, in a deal that temporarily offered lower rates than the utility ComEd. But many advocates were disappointed that Constellation relied on nuclear for its portfolio, and the experiment with aggregation didn’t seem to spark any increase in renewable energy. The deal was quietly allowed to expire once ComEd prices became cheaper.

Clean energy developers, advocates and elected officials agree that new legislation is needed to provide more funding for renewable energy development, and are backing two competing bills meant to increase in-state renewable generation. But since last fall, ComEd and its parent company Exelon have been embroiled in scandal as the federal government investigates alleged illegal lobbying and patronage activities. The scandal fractured the tenuous coalition between Exelon and advocates, and the outlook for the bills is unclear.

ComEd’s lobbying clout was likely key to securing funding for a microgrid on the city’s South Side, a measure that was controversial given the increase in bills for residents citywide and concerns over whether the microgrid could violate the state’s ban on utilities owning generation.

ACEEE highlights the importance of city-utility partnerships in increasing resilience, noting Minneapolis’ successful partnership with Xcel Energy. Chicago’s resiliency plan likewise highlights various partnerships with ComEd, including the microgrid and a related Community of the Future pilot project in the historic African American Bronzeville neighborhood. ComEd must be central to energy efficiency, renewables and equity initiatives in Chicago. But the scandal could mean relationships between city officials and the utility are more wary and fraught in the near future.

Chicago is among only seven cities of the 66 cities ACEEE surveyed that include energy equity in their resilience plans — reducing the disproportionate burden that lower-income and minority communities shoulder in terms of financial, health and other costs of energy. Athens and New York also addressed equity in their plans.

A decade ago, Chicago became a national symbol of energy inequity for its two coal-fired power plants, located in adjacent low-income, immigrant neighborhoods. The plants were closed in 2012 in light of cheaper natural gas-fired power and a decade-long community campaign.

Equity in cleaner transportation is among the factors evaluated by ACEEE. Public transportation in Chicago has long been less accessible in lower-income neighborhoods on the South and West sides.

The Little Village Environmental Justice Organization, which played a lead role in fighting to close the coal plants, also spearheaded an eventually successful campaign for a bus heading downtown from their neighborhood. Meanwhile, the city’s bike-share program has disproportionately been concentrated in central and higher-income neighborhoods, and Little Village youth journalist and Energy News Network contributor Gerry Salgado highlighted how bike commuting is nearly impossible for local residents.

Chicago’s resiliency plan paints a picture of an idyllic, prepared, green and thriving city, with ambitious goals for education, job training, affordable housing, crime reduction, neighborhood cohesiveness and more along with the energy-related measures. The real test will be to what extent it can actually deliver, or even launch concrete programs to try.

Monica Eng, a journalist with WBEZ’s Curious City, evaluated how Chicago performed on another suite of energy-related plans: its 2020 Climate Action Plan, released to much fanfare in 2008 by Mayor Daley. Eng noted that the city had made progress on various fronts, including transit improvements and requiring all building renovations to meet green standards.

But the goals in many cases were vague and unmeasurable to start with — for example, encouraging Chicagoans to reduce their carbon emissions or making a list of resilient plant species. Other specific goals went unmet: For example, the city recycled only 9% of its recyclable waste compared to a goal of 90% by 2020.

At a public newsroom event Jan. 15 at DePaul University, Eng noted the city’s goal of increasing bike and walking trips to one million a year. She cited statistics showing the city had likely met that goal, but “there are about three million people in the city, so that means they’ll meet the goal if one out of three people ride a bike once a year.”

Eng found the city’s progress on specific energy-related goals inconclusive. For example, she found no official data regarding the goal of increasing co-generation, and “residential greenhouse gas emissions from electricity consumption dropped by 19% between 2005 and 2015, according to city data. However, information is unavailable as to what extent renewable energy sources contributed.”

To make sure Chicago makes meaningful progress on its energy-related resilience plans, it will be up to clean energy advocates, community leaders and regular residents who pushed for the closure of the coal plants, the passage of the Future Energy Jobs Act and other past achievements to keep pressure on decision-makers. As the resiliency plan itself notes, since the city’s founding, Chicago’s people have always been the key to its resilience.