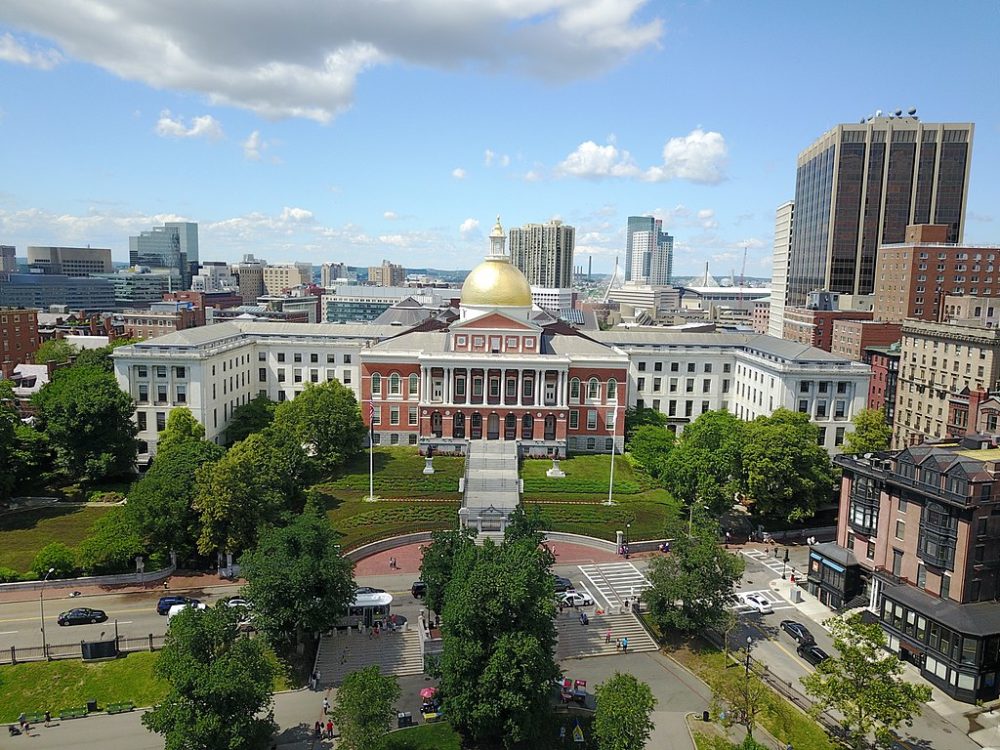 The Massachusetts Statehouse in Boston. Lawmakers here are considering a bill that would create a carbon pricing system, a proposal that one observer called "extremely politically viable in both chambers."

Some form of carbon pricing has been proposed every year since 2013, but advocates sense more momentum this session.

Massachusetts could become the second state to implement an economy-wide carbon price, as stakeholders including the state Senate leadership and small-business owners rally in support of such a measure. Still, proponents caution, the success of any carbon price will depend on the details, which are still up in the air.

“Any approach can fail and any approach can do the job,” said Sen. Michael Barrett, a longtime champion of carbon pricing and the main author of a climate bill released this week that includes a carbon price. “The key is where you put the cap, where you set the fee or tax.”

Carbon pricing refers to a whole range of systems designed to add cost to fossil fuels in order to lower consumption. Among the most common models are carbon taxes, in which an extra fee is imposed on polluting fossil fuels, and cap-and-trade, in which a ceiling is placed on total emissions and emitters must pay for their share of pollution within this limit. In many cases, the revenue generated by the program is then reinvested in measures to further reduce emissions.

Massachusetts is part of the Regional Greenhouse Gas Initiative, a 10-state cap-and-trade system that aims to lower emissions from power generation. The state is also a member of the Transportation and Climate Initiative, a coalition of states and Washington, D.C., that is attempting to establish a similar system to rein in transportation emissions.

Interest in these approaches is growing. Major corporations are pushing for adoption of the model and 16 states have introduced carbon pricing legislation. California is so far the only state with an economy-wide carbon price.

Some form of carbon pricing has been proposed in the Massachusetts Legislature every year since 2013, often by Barrett. Former Rep. Jennifer Benson also repeatedly filed a bill calling for a gradually increasing carbon fee coupled with a system of rebates to lower-income households.

Carbon pricing made it into a bill passed by the Senate last session, but was removed from the final version in negotiations with the House.

But support for the idea of carbon pricing has been on the rise. Earlier this month, proponents packed a legislative hearing room to lobby for the idea. A group of 150 small-business owners released a letter urging lawmakers to adopt carbon pricing. Seven mayors signed another similar letter and more than 300 faith leaders from across the state also wrote legislators to encourage action.

“We as a society should be paying for the real cost of what we’re doing and using — even if I have a couple hundred trucks on the road,” said Larry O’Toole, owner of Gentle Giant Moving Company in Andover.

Then, last week, the Senate released a package of three climate change bills, one of which calls for a carbon pricing system for transportation by 2022, for commercial, industrial, and institutional buildings by 2025, and for residential buildings by 2030. The exact mechanism of the carbon price is left to the administration to determine, but would be required to minimize the impact on low-income households and vulnerable manufacturing sectors.

Barrett left the specifics out of the current bill, he said, because he thinks it is important to get a carbon price in place as soon as possible, rather than delaying while advocates quibble over details.

“It won’t do any good to go for the best if you precipitate a backlash and see it repealed,” he said. “We simply have to find a way to secure beachheads and then defend them.”

The move toward an economy-wide carbon price was widely praised. Still, climate change activists are clear that it is the details that will determine how successful the measure could be.

Climate XChange, a nonprofit that advocates for carbon pricing policies, supports the bill. To make a carbon price work, however, the organization would like to see at least 40% of the revenue generated by any program dedicated to underserved communities. And a minimum price of $40 per ton of carbon emissions is needed to make any real impact, said Tim Cronin, policy and partnerships manager for the group.

“We can’t be thinking about going below that and seriously addressing the climate crisis,” he said.

Some advocates are distressed by the current lack of details. Our Climate, a group of young people advocating for policies to fight climate change, would like to see the bill include a high starting price of at least $50 per ton placed on emissions as well as a guarantee that the bottom 60% of earners would receive rebates worth more than the carbon fee costs them. They also want the bill to include a requirement that at least 90% of program revenue be reinvested in infrastructure and projects that will further reduce carbon emissions.

“Youth had testified on specific requirements they wanted on carbon pricing,” said Eben Bein, New England field coordinator for the group. “Those protections that were asked for repeatedly were not included.”

The next step is for lawmakers to debate the proposals and consider amendments. The entire Legislature is expected to vote on the bills by the end of January. And supporters are optimistic about the chances for carbon pricing to become a reality.