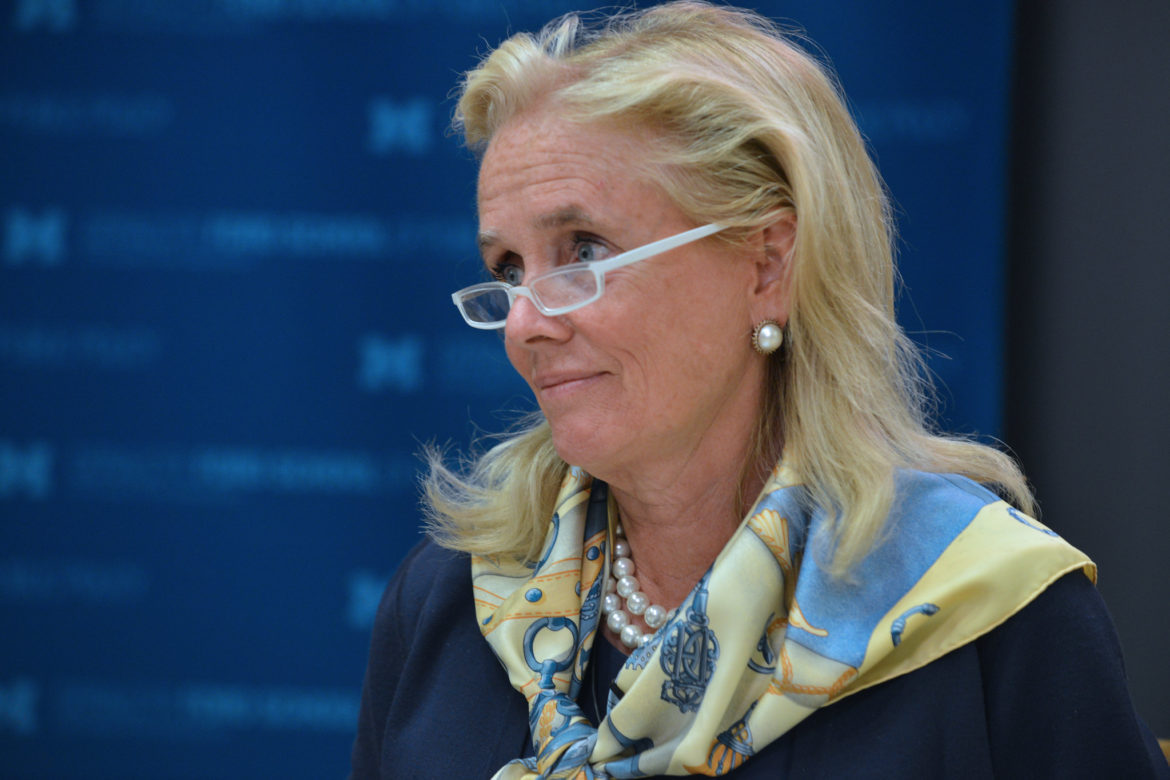 In order to build support across the aisle, and even within her own party, Dingell says she wants to “build the coalition” around clean energy policy. This includes between organized labor and environmental activists who have disagreed over the Green New Deal and fossil fuel infrastructure.

Last year, Dingell co-sponsored legislation that targets net-zero carbon emissions nationwide by 2050, which she says is based on United Nations climate models. That proposal and others are now included in a more sweeping climate plan just introduced by House Democrats. Coalition-building will likely be key if the plans stand any chance in a Republican-controlled Senate.

Dingell — whose southeastern Michigan district includes Ann Arbor and Detroit-area communities — was elected to Congress in 2014. She took over the seat of her late husband, Rep. John Dingell, Jr., the longest-serving member of Congress in history, who died last year. She serves on the House committees on energy and commerce and natural resources.

On Jan. 30, Dingell spoke with the Energy News Network from her Washington, D.C., office about building congressional support around clean energy, electric vehicles and ongoing environmental challenges in her Detroit-area district.

The interview has been edited for clarity.

Q: You’ve sponsored a number of clean energy bills recently, including calling for a national climate bank, funding for electric vehicle infrastructure and a national carbon-reduction goal by 2050. What aspects of a national clean energy plan can get both Republicans and progressive Democrats on board?

A: I’m trying to build the coalition that’s going to work to get something done. For me, the bank and the electric vehicle infrastructure are two we should be able to do right now to build a bipartisan coalition around.

Other countries are building these electric and autonomous vehicles, and we cannot cede leadership in innovation and technology. GM and Ford are announcing new EV models, but the problem for consumers is they don’t have confidence in range. There isn’t charging infrastructure, and quite frankly it’s too expensive. We need [electric vehicles] to be affordable, the infrastructure and we need to improve battery research.

The [climate] bank is there to develop the capital to invest in startups, which is where new ideas will come from for innovation and technology.

Q: U.S. Rep. Frank Pallone of New Jersey just announced the Climate Leadership and Environmental Action for our Nation’s (CLEAN) Future Act, but faced swift backlash from some environmental groups for not being strong enough. What’s your response?

A: That’s a committee bill taking a number of aspects from different members and putting it in an overall structure.

I’m following what the United Nations said and am working to bring everyone to the table. My 2050 bill was supported by the Sierra Club, the League of Conservation Voters and Natural Resources Defense Council — by the way, Sunrise is even supporting it.

I’d like to accelerate it, but the bill is technology-neutral. We have to develop the technology so we can get there. Thirty percent of carbon emissions in the country come from transportation. We’ve got to replace gasoline engines with EVs and other kinds of energy supplies.

Q: Another dispute among clean energy supporters, as seen in the presidential campaign, is whether banning fracking should be part of a climate plan. What are your thoughts?

A: I’m focused on where you see my focus. I’ve got to look at, but I just haven’t focused on it. I have other real priorities.

Q: There have been several announcements lately in the electric vehicle space, particularly from Detroit automakers launching new models and the state working on a charging network. Do you see some of the more aggressive predictions on EV sales being realized?

A: It can’t just be about Detroit. … People have to look at this as a state and regional issue, otherwise people are going to say Detroit gets everything. We’re all working together to keep us the headquarters. It will happen when we build the infrastructure and build consumer confidence in the range [of vehicles] and make them affordable.

Q: Focusing on Michigan specifically: Do you have a position on whether the Line 5 pipeline should be decommissioned?

A: I’m really worried about a spill in the Great Lakes, but that’s the governor’s and attorney general’s [issue]. I’m focused on my region and what I can do. I’ve introduced pipeline safety bills in Congress and am trying to get stuff done. I’m focused on what I can deliver.

Q: Gov. Gretchen Whitmer just announced an Environmental Justice Advisory Council. Parts of your district near Detroit have been particularly impacted by air pollution. How can you bring attention to voices and groups who have been under-represented in this discussion?

A: My district has a ton of [environmental] priorities. … I’m working on every single one of them. We’re doing a town hall with [Michigan Department of Environment, Great Lakes and Energy Director] Liesl Clark and the U.S. EPA. I do regular town hall meetings and some days talk to Liesl three times a day. I watch out for my constituents and make sure their voices are heard.