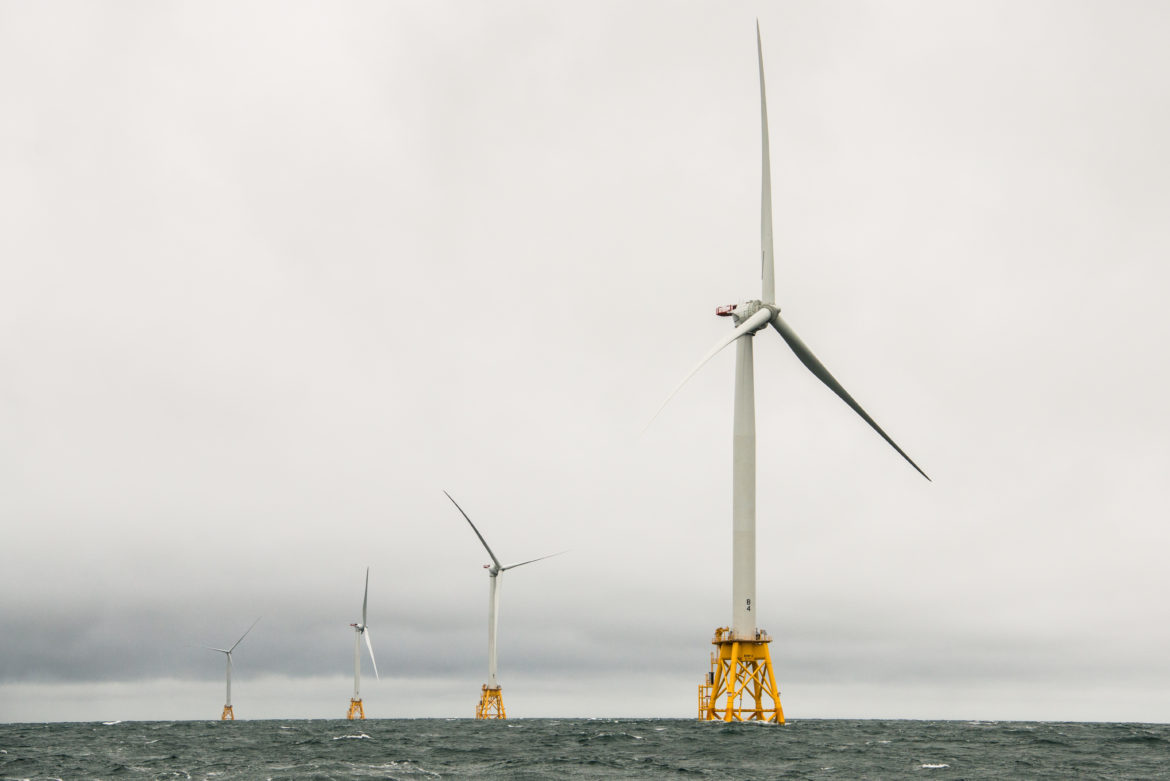 The Block Island Wind Farm, the first offshore wind farm in the U.S., generates power off the coast of Rhode Island, in the Atlantic Ocean. Leaders in the Ocean State see a new offshore wind innovation hub in Providence as an opportunity for Rhode Island to become "the center of the blue economy."

The state’s jumpstart on offshore wind could help it become a pioneer in ocean-related innovation, some leaders think.

As Danish wind giant Ørsted prepares to open an offshore wind “innovation hub” in Providence, Rhode Island, some business and economic development leaders hope it could help seed a much larger “blue tech” sector in the state.

Blue tech refers to ocean-related innovations, many of which are aimed at the challenges posed by climate change and at improving the health of the seas. A draft economic analysis conducted for the Rhode Island Commerce Corp. recommends that the state begin laying the groundwork to become a leader in the sector, citing its existing strength in maritime industries, academic and defense industry resources, and its jumpstart on offshore wind.

Although the report hasn’t yet been formally released, Gov. Gina Raimondo has already acted on one of its recommendations: Her 2020-21 budget proposal calls for $10 million in bond spending for a Center for Ocean Innovation.

“Rhode Island is the Ocean State,” said state Secretary of Commerce Stefan Pryor, referring to the state’s nickname. “We believe that our state has claim to the distinction of serving as the center of the blue economy for the U.S. I believe we are en route to in fact serving in that capacity.”

Pryor’s office has vigorously pursued Ørsted and other wind-related companies, trying to persuade them to set up shop in Rhode Island as the industry has gathered steam in the Northeast in recent years.

Jointly headquartered in Boston and Providence, Ørsted U.S. operates the first-in-the-nation Block Island Wind Farm, off the coast of Rhode Island, and has six other U.S. projects in the works totaling just under 3,000 megawatts. One of those is the 700-megawatt Revolution Wind project, being developed in partnership with Eversource in waters about 15 miles south of the state.

The company announced last month that it will locate a U.S. Innovation Hub in CIC Providence, a shared workspace in the heart of the city’s budding innovation district adjacent to downtown. The hub will be the contact point for technology companies and startups interested in working with Ørsted.

“There is a high level of interest among companies to understand what kinds of opportunities exist with us,” said Matthew Morrissey, Ørsted’s head of markets for the Northeast. “We want to make it as easy as possible for companies to find out how their products, technologies, services can be utilized by this industry. This becomes the front door for those conversations.”

Morrissey said the idea for such a hub came about through numerous meetings with administration officials about how to support and grow the state’s existing maritime ecosystem, while also helping Ørsted build a U.S. supply chain.

The hub’s interiors pay homage to its locale: The back wall features images that put the size of wind turbines in relative degrees compared to popular Rhode Island landmarks, such as the so-called Superman building, an Art Deco-style skyscraper in downtown Providence that resembles the Daily Planet building from the 1950s television series.

At least a half-dozen other wind-related businesses have also leased space at CIC Providence since it opened last August in the Wexford Innovation Complex.

That building, completed last summer, has drawn scrutiny because of the $41 million in state subsidies and tax credits secured by the developer, Wexford Science and Technology, as part of the Raimondo administration’s effort to launch the innovation district. Wexford, based in Baltimore, specializes in developing what it calls “knowledge communities” around major research universities (in this case, Brown University and the University of Rhode Island).

The majority of the subsidies went to developing a 12,000-square-foot ground-floor “innovation hall” open to the community, and to getting CIC — a branch of the Cambridge Innovation Center, of Cambridge, Massachusetts — up and running, according to Thomas Osha, Wexford’s senior vice president of innovation and economic development.

CIC offers highly serviced small office space, providing kitchens, technical support, printing stations, and a variety of programming. That level of service requires a lot of upfront capital support at the start because clients are on month-to-month contracts, Osha said.

That month-to-month commitment makes sense for wind companies now “because our flexible terms allow these companies to grow their presence as opportunities for offshore wind activity grow as well,” said Rebecca Webber, the general manager. “Every 30 days you can change the size of your presence.”

However, Webber noted that the CIC company has a broader blue-tech mission, and is aiming to bring together resources, networks and expertise to support clients working in that sector across their eight locations. They have partnered with SeaAhead, a Boston-based benefit corporation that helps support blue tech ventures that will aid ocean industries and ocean health.

SeaAhead works across the Northeast and is seeing considerable interest from southern New England, said Alissa Peterson, co-founder and executive director. The company currently has 26 startup members, four of which have a Rhode Island presence, she said.

“We see blue tech as a new major growth area for the region which crosses borders,” she said.

The draft economic report that highlights the potential for growth of a Rhode Island blue economy was conducted by a team of researchers led by Bruce Katz, an urban expert who conducted a similar study for the state four years ago while at the Brookings Institution. This report is meant to be a follow-up.

A draft copy recommends the state establish a “Blue Economy Innovation Campus,” with a blue-tech accelerator, in collaboration with a major university and corporations. It also suggests a state-funded “Governor’s Chairs Program” to attract top researchers to the state, in partnership with the University of Rhode Island and the U.S. Navy’s Naval Undersea Warfare Center, in Middletown. That model is based on a program in Tennessee that operates with Oak Ridge National Laboratory.

Ørsted did not participate in the study, Morrissey said. However, he said the state is well poised for a blue-tech expansion given the “remarkable number of businesses, institutions and nonprofits aligned on how to capture as much maritime innovation as the region can, to be the tide that rises all boats. That kind of alignment is not very common.”