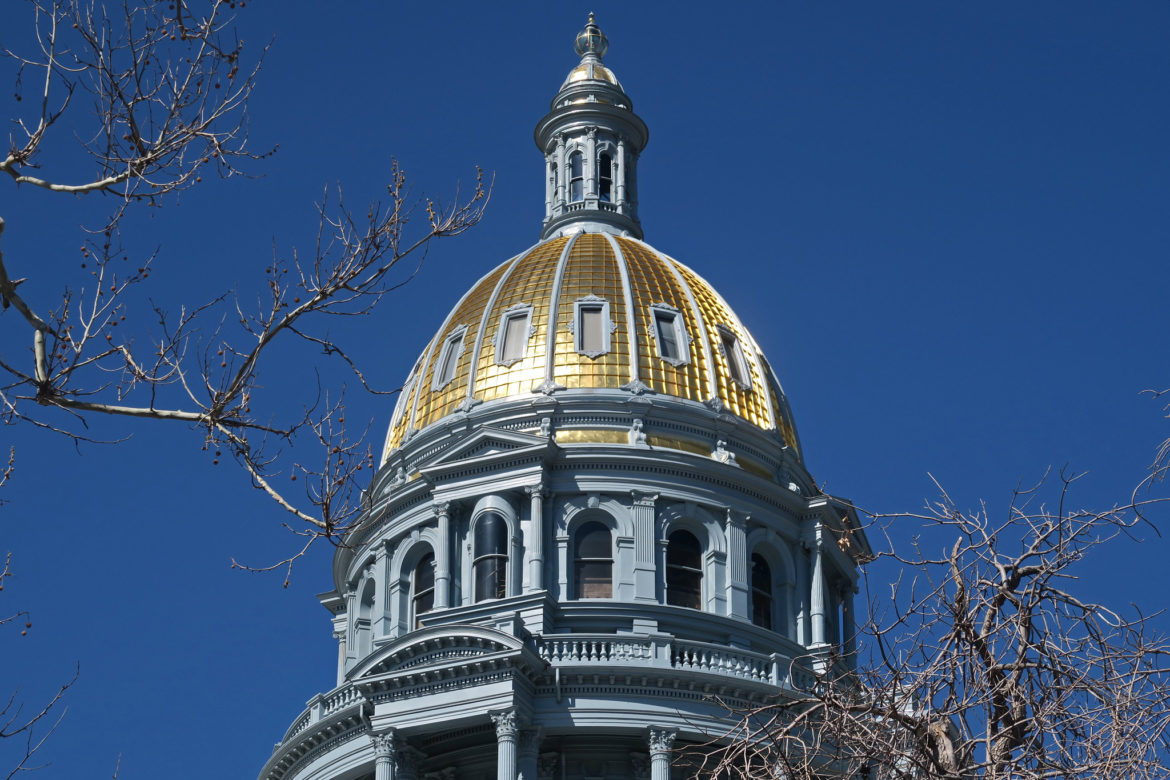 The Colorado Statehouse in Denver. State lawmakers here are considering a bill that would require natural gas utilities to use 5% renewable natural gas by 2025 and 15% within a decade.

The bill would require large natural gas utilities to source some of their supply from dairies, landfills and other sources.

Colorado would require natural gas utilities to integrate renewable energy under a far-reaching bill introduced in the state legislature.

“I don’t see this as a stand-alone policy,” Hansen said. “I see it as one of the many levers, one of many tools we need to rapidly decarbonize the economy in Colorado. And it will take every tool in the kit to meet our targets.”

The proposal also seeks to create a market incentive for utilities to adopt hydrogen in what Hansen describes as part of Democratic legislators’ effort this year to fill in the gaps of last year’s sweeping, economy-wide decarbonization legislation. Hydrogen itself is a fuel medium, meaning it can be put to many uses, including transportation.

Hansen sat down with the Energy News Network to talk about his bill in advance of its expected first hearing on Tuesday. The interview has been lightly edited for length and clarity.

Q: Why is this bill needed?

A: In the last legislative session, we made great progress on the electrical sector. We made major progress in the transportation sector. I think now we need to look hard at how to decarbonize the building sector. That will quickly become the largest category of emissions if we don’t start making progress now.

My idea is to use local resources to rapidly decarbonize tough emission sources and get net benefit for building emissions. Think about existing sources of coal-bed methane. There are natural and man-made sources all over Colorado. This bill would be designed to capture and utilize that resource. And we all know that methane is a very powerful greenhouse gas, almost 25 times as powerful as carbon dioxide.

Second, we have a significant need for creating methane molecules from waste products like dairies, landfills, and metro wastewater districts. There are already great examples of this in Colorado and across the country. We have the technology. We have the resources. Now we need the standard in place to provide the market pull to get that investment to happen.

It is very analogous to what we did with the renewable portfolio standard for electricity. We show the market a clear demand for that product, and the market then innovates and delivers the lowest-cost options for the customer. The overriding headline is the huge amount of benefit on carbon and greenhouse gas emissions.

Q: Is there any way to estimate that?

Other parts of the country offer case studies. For example, Vermont, which has a lot of dairies, has this wonderful program where they use bio-digesters to make methane gas from the waste product of dairies. The dairies meet 20% of demand for natural gas in their state. In my research last year, I found a lot of latent potential in Colorado.

SB 150 has a pretty exhaustive list of all the things that would count toward meeting the target. Remember it’s not just about turning the methane molecules into the natural gas supply chain, the pipeline. It also counts if you use that to make electricity or transportation fuel. It gives a lot of flexibility not only for the source of gas but also the final use.

Q: You mentioned coal-bed methane. To my knowledge, we just have one or two coal mines, both in the North Fork Valley, where that would be relevant.

A: There are also opportunities near Montrose and in the Raton Basin [surrounding Trinidad and Walsenburg]. That part of the state badly needs investment, badly needs the jobs.

Q: Of the many potential sources acceptable for meeting the renewable requirement, what do you think might have the most sweeping repercussions?

A: I think this could be a real game-changer for the dairy industry. They are spending a lot of money right now remediating the waste from those operations. What if instead they could turn those into a profit center? That holds huge potential. In Vermont, they went from spending money to remediate waste products to now creating a product that has a lot of value in the market. I think this could be a big deal for dairies in Colorado.

I think it could be a big deal for landfills around Colorado. I was told in Denver that they could double or triple their capacity on the use of landfill gas. I have also been told something similar from metro wastewater districts, Colorado Springs and metro Denver obviously being the largest.

Q: Do you see this bill as a way to jumpstart hydrogen as a fuel medium?

A: Yes, I think this will be a great way to demonstrate the value of hydrogen production, have it count toward these targets. I think it will take several years to mature.

I am very specific about the idea of green hydrogen versus blue hydrogen. It’s an important distinction, because you can create hydrogen gas by steam reclamation of methane. That does not give you a great emissions profile. But if you are using excess electricity to make the hydrogen [from water] through electrolysis, that has very little emissions associated with it, almost zero.

There is a very plausible future for Colorado where, during some times of the year, we have excess renewable energy capacity. There might be a lot of wind blowing overnight but very little demand. We essentially put the brakes on the wind turbines and don’t make any power because we don’t have any place to use it.

What if we take all that excess electricity to make hydrogen gas, and use that hydrogen gas to displace use of fossil fuels? You can then take the hydrogen and fossil fuel use in a pipeline or you or use it in a fuel cell. This is a massive opportunity in Colorado.

Q: Does hydrogen require water as a base?

A: Yes, if you’re doing electrolysis, you are basically putting two electrons into a pot of water. It’s not a lot of water relative to other uses in the state. This would be a very small amount of consumption.

Q: Are there other implications for water?

A: Because of how water has a nexus with energy production and use, if we are displacing some fossil fuels, that will have a net benefit of saving water. As for dairies, the ag wastes can sometimes have a negative impact on water quality. If you are doing proper remediation by using bio-digesters, you significantly reduce the impact on local groundwater and water quality.

Q: The bill applies to utilities with 250,000 or more customers. That would seem to eliminate all but the Public Service Co. of Colorado, the subsidiary of Xcel.

A: It applies more broadly, but the large definition means that the large utilities must submit a plan to the Public Utilities Commission and demonstrate compliance. Black Hills Energy will likely also reach that 250,000 threshold at some time.

For the small utilities we have left it to the discretion of the PUC to develop a plan that fits their circumstances. They will then have to comply with whatever program the PUC creates for small utilities. They still have to comply, they still need to implement a renewable natural gas program. But they have more flexibility than the large investor-owned utilities.

Q: Do you expect pushback on this bill? If so, how will you respond to the questions or dissent?

A: My guess is that some utilities may be reluctant to have a set mandate. They would rather do voluntary programs. There could be pushback from some of the environmental groups that broadly object to natural gas infrastructure. There is a very strong environmental case I will be ready to make if that objection is raised.