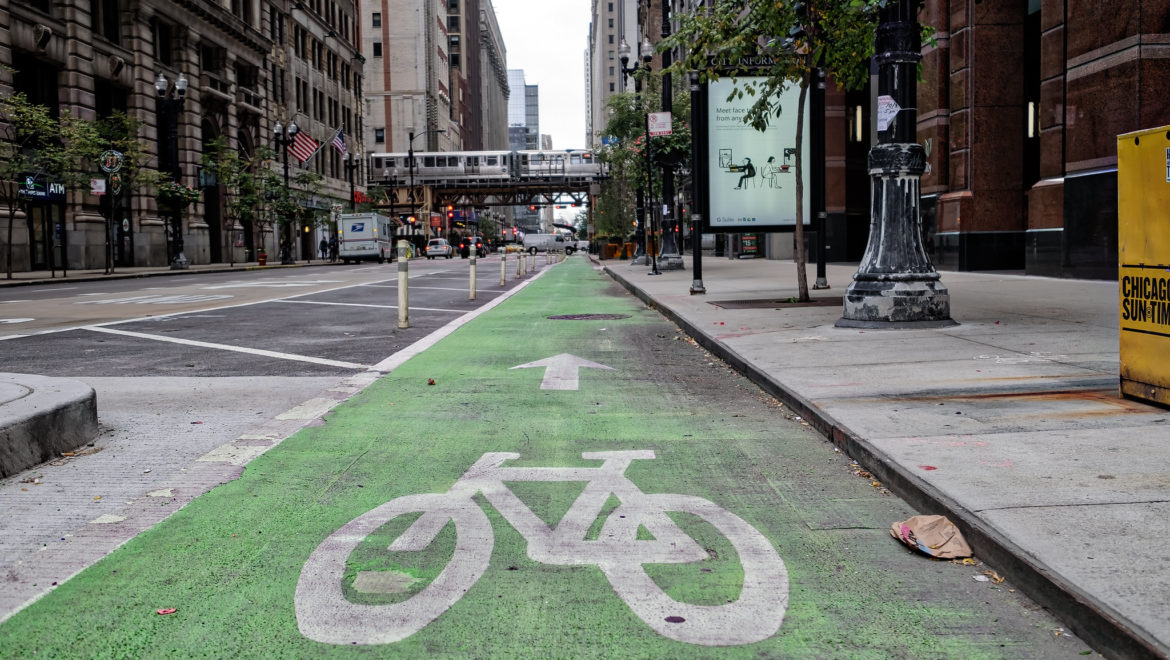 Nearly 250 miles of bike lanes crisscross Chicago, but advocates in neighborhoods on the city's South and West sides say bicycling remains an unsafe and impractical mode of transportation for many people in their communities.

A lack of infrastructure and the risk of being hit by cars, victimized by crime, or stopped by police discourages biking.

Chicago has made big strides in recent years to become a more bike-friendly city.

Despite its efforts, though, bicycling remains an unsafe and impractical mode of transportation in many black and brown neighborhoods, bicycle riders and advocates say. A lack of infrastructure, such as trails and bikesharing hubs, and the greater likelihood of being hit by vehicles, victimized by crime, or stopped by police, make cycling a riskier activity in these areas.

“If you’re asking a woman of color to get on a bike in a disinvested neighborhood, she’s probably thinking, ‘You want me to be a target,’” said Courtney Cobbs, an avid rider and budding advocate for bicycling equality.

As Chicago looks to reduce carbon emissions from transportation, Cobbs and others say the city will need to invest more to make bicycling safe and convenient across the entire city.

Chicago has made measurable progress over the last two decades in expanding bicycling. The percentage of bicycle commuters in the city has more than tripled since 2000 to 1.7% in the 2017 American Community Survey.

Chicago is bike-friendly, in one sense, due to the largely flat terrain. It also boasts nearly 250 miles of bike lanes, paths and trails. Of these, 18.5 miles have barriers to protect riders from automobile traffic and another 67 miles have marked buffers for bike lanes. Views of the city’s spectacular skyline are readily visible from the 18.5-mile Lakefront Trail, which stretches from Lincoln Park on the city’s North Side down to Jackson Park on the South Side.

There are also more than 13,000 bike racks across the city, many of which are located within Chicago Transit Authority rail stations. In addition, riders are allowed to bring bikes on CTA and Metra commuter rail trains, and every CTA and Pace suburban bus is equipped with a bike rack.

Bikeshare through Divvy is also available throughout much of Chicagoland. Divvy, owned by the Chicago Department of Transportation and operated by Motivate International, Inc. launched in 2013 with 300 stations. Stations outside downtown were spaced a quarter mile apart in more densely populated areas, and a half mile apart in neighborhoods with less population.

Like rail and bus stations in Chicago, bike paths and bikeshare stations are more sparse on the South and West sides than they are on the North Side. This is due to multiple factors, including lower population densities, a larger geographic footprint and differences in land use.

Riders on the city’s South and West sides have less access to bike trails. The city’s highest crash corridors are also disproportionately in those areas, Whitehead said.

Aggressive policing tactics practiced against black and brown bicycle riders serve as yet another disincentive.

Olatunji Oboi Reed, president and CEO of Equiticity and co-founder of Slow Roll Chicago, is a vocal advocate for advancing equity in access for bicycling resources such as protected bike lanes and bikeshare stations. He acknowledged that Divvy has made progress in expanding its docking stations, but said that merely placing new stations in neighborhoods is not enough.

‘Biking while Black’ (or Brown)

Another barrier is the disparities in ticketing for infractions by bicyclists on the city’s South and West sides that are often ignored in white neighborhoods. Mary Wisniewski of the Chicago Tribune documented the issue of “Biking While Black” in an article written in 2017, with a follow-up in 2018. According to figures obtained from the Department of Finance, seven of the top 10 community areas for biking-related citations in 2016 were in predominantly African American neighborhoods. The remaining three were in Latinx neighborhoods.

In an August 2018 interview, Glen Brooks, director of public engagement for Chicago Police, said the department incorporated enhanced traffic enforcement, including biking infraction-related stops, in an effort to reduce violence in specific neighborhoods.

“When we have communities experiencing levels of violence, we do increase traffic enforcement. Part of that includes bicycles,” Brooks told WTTW, Chicago’s PBS affiliate. “It isn’t a matter of fact that we are targeting people of color for bicycling. We are trying to do everything humanly possible to curtail the violence. And we know that there are a number of shootings that are directly tied to vehicles and bicycles.”

Reed, who lives in North Lawndale on the city’s South Side, took strong exception to the department’s justification for the harsh ticketing policies.

“Black and brown cyclists are now being targeted by inequitable strategies at the hands of the Chicago Police Department. It’s racial profiling. It is stop and frisk. And it’s wrong,” Reed said. “They are actively discouraging people in predominantly black and brown neighborhoods” from riding bikes.

Cobbs, a writer for Streetsblog Chicago, is a resident of East Rogers Park on the city’s far North Side, which has access to good transit options. Nonetheless, she said, she’s frequently harassed by motorists when she is riding her bicycle.

“The biggest thing that influences my advocacy is being a black woman on a bike,” she said. “I’ve had a lot of incidents with drivers where they tried to run me off the road or tell me that I don’t belong on the road, or I can only take up so much space on the road.”

Cobbs drew on her experiences to express an understanding of the reluctance of residents of disinvested neighborhoods, and especially women, to embrace biking as a form of transportation.

“In an ideal world, bike lanes will be designed with someone like me or someone who is in a wheelchair or is riding an adaptable bike and cannot bike as quickly as, say, I or someone else could,” Cobbs said.

Specifically, Cobbs would like to see more barrier-protected bike lanes as protection against being hit by a car or “doored” — injured by riding into a car door that has suddenly been opened.

Reed also cited safety concerns, and specifically suggested adding barrier-protected bike lanes for Stony Island Avenue, a busy street on the city’s South Side, and Ogden Avenue, a diagonal street that runs from the Near West Side of the city into the suburbs.

He also suggested placing protected bike lanes in at least some of the city’s broad boulevards or other unconventional locations.

As cities pivot toward renewable energy sources for electricity, transportation accounts for an increasingly larger share of their carbon footprint. Biking can play a significant role in reducing traffic congestion and carbon emissions. However, Chicago and other urban areas won’t realize their full biking potential if only affluent white residents consider riding a viable form of transportation.

In 2015, the Active Transportation Alliance released a report titled “Bikeways for All”. The report names as one of its main goals the construction of 180 strategically placed “low-stress” bike paths designed to ensure bike path access within a quarter of a mile for 80% of all Chicago residents.

Also in 2015, Divvy added 176 stations, largely concentrated on the predominantly African American and Latinx South and West sides of the city. That same year, Divvy launched the “Divvy for Everyone” program, with a lower initial membership fee of $5 for low-income residents, no requirement for a credit card and the ability to sign up in person in addition to online. Nonetheless, Divvy bikeshare stations are nearly nonexistent on the city’s far South Side.

To address this lack of bikeshare access, the city of Chicago launched a pilot “dockless” bikeshare program from May to October 2018 in 10 far South Side wards. The pilot was limited to four providers: LimeBike, Ofo, Jump and Zagster. LimeBike and Ofo bikes used wheel locks, while Jump and Zagster bikes used cable or U-locks. Because of their locking systems, LimeBike and Ofo were limited to only 50 bikes, while Jump and Zagster were each able to offer up to 250 bikes. A survey conducted after the conclusion of the pilot revealed that 69% of respondents preferred using “dockless” bikes.

A proposed agreement announced in March 2019 between the city of Chicago and the Lyft ride-hailing service, which purchased Motivate in July 2018, would expand Divvy rideshare to all 50 wards by 2021. Expansion would add 175 new bikeshare stations and more than 10,000 additional bicycles, including electric pedal assist bikes. In January 2020, NBA superstar LeBron James announced that his LyftUp program, initiated in New York City, would soon be expanded to Chicago. LyftUp provides free one-year bikeshare memberships to low-income people between the ages of 16 and 20.

Reed said investments in bike equality have potential to produce far-reaching benefits in disinvested neighborhoods, including a means of transportation for low-income residents to get to available jobs. Bike-friendly neighborhoods also boost local retail businesses, since cyclists tend to engage more with local businesses.