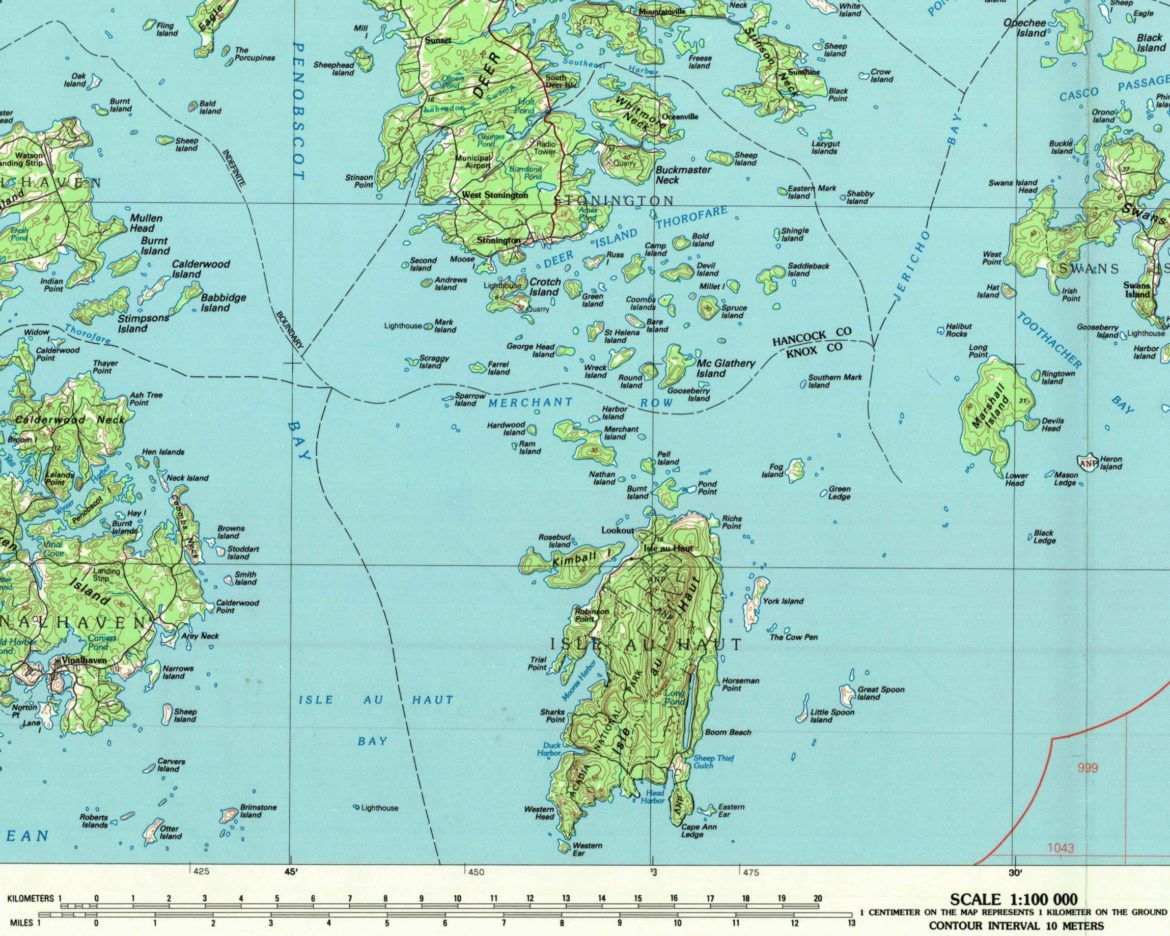 A topographic map shows Isle au Haut, at bottom center, in 1985 — two years after the island replaced its diesel generator with a 7-mile undersea cable that brings electricity to the island from Stonington, its neighbor to the north. Decades later, residents of Isle au Haut and other Bay Harbor islands are looking to microgrids as a way to cut costs and rely less on the mainland for power.

Isle au Haut is among the latest islands pursuing a microgrid to reduce long-term costs and reliance on the mainland.

The state’s coast is dotted with thousands of islands, many inhabited with populations ranging from a few dozen to more than 10,000.

These island communities have long had to be creative and resourceful to obtain electricity, but power is often costly. Several are now looking to microgrids as a way to cut costs and rely less on outside sources for power.

This is especially true for small islands like Isle au Haut, which has an official population of about 70. The low population density means fewer people have to pay to maintain a full array of power lines.

Isle au Haut since 1983 has relied on a 7-mile undersea cable that brings electricity to the island from Stonington (also on an island). But the cable’s lifespan was only estimated to be 20 years. Rather than pay roughly $1.7 million to replace it, members of the island’s electric cooperative have decided to build a microgrid. Despite a slightly higher upfront cost, officials believe that by using renewable energy, residents will come out ahead through reduced fuel costs.

The planned microgrid, which project leaders hope will be up and running by the summer, includes a 300-kilowatt solar array, with super capacitor storage capacity of 1,000 kilowatt-hours. In the winter, air-to-water heat pumps planned for municipal buildings and schools will store excess electricity to deliver heat. A diesel generator will be on hand in case the system fails. And as long as the cable continues working, the island will still have a backup connection.

“It was purely economics on our part,” said Jim Wilson, president of the electric co-op’s board. This was simply the way to avoid exorbitant electricity costs. Residents may still have a steep charge to pay for the new array — an estimated $6,400 per member — which Wilson acknowledged isn’t ideal. But any solution would have a fee attached, and government grants could cut this one by as much as $3,000, he said.

Officials believe they’ll be able to maintain electric power costs as they are now: about 32 cents per kilowatt-hour with a $16 monthly meter fee (about 16% higher than the threshold for federally defined high energy costs). They think the microgrid will be more reliable than the cable, and less costly than other potential new power sources like diesel, which could raise prices to about 65 cents per kilowatt-hour.

Mount Desert Island is just beginning its microgrid discussions. The island, Maine’s largest and home to Bar Harbor, has a population of about 10,500. It’s connected to the mainland by a bridge. A microgrid isn’t officially planned at this point, but a nonprofit renewable advocacy group wants to change that.

Below, a 1985 National Park Service map of the area highlighted at left shows more of Bay Harbor, Maine, including Mount Desert Island, at top right, and the surrounding area, including Isle au Haut, at bottom center.

A Climate to Thrive was founded about three years ago with a stated goal of obtaining energy independence for the island by 2030. “Energy independence” can mean different things to different people, ACTT board member Ken Colburn acknowledged. But above all, the group’s leaders want to rely less on the mainland for power, and they want to achieve that goal with clean energy.

The island’s peak summer demand is 16 megawatts, Colburn said. ACTT has been ramping up solar power on Mount Desert Island for the past few years, with about 2 megawatts of solar on the island now. They want to double that this year. But they also want storage and a “microgrid laboratory” to test new technology like transactive energy.

It’s not yet clear what the microgrid or the laboratory specifically would entail, but Colburn emphasized that “we don’t want a microgrid [just] to have a microgrid.” The objectives include transitioning to clean energy and becoming as independent as possible with local generation, he said.

The organization views an upcoming utility acquisition as a perfect opportunity to get started. Canada-based electric utility Enmax is preparing to acquire Emera, which currently supplies Mount Desert’s power. Officials from the utility have met with ACTT’s leadership, and while nothing is planned yet, both groups said they hope to maintain a positive relationship.

“We haven’t made any specific commitments, but certainly understand A Climate to Thrive has an interest in microgrid technology,” Diana Stephenson, Enmax’s vice president of public affairs, wrote in an email. Stephenson added that “we will continue to work with them to explore how these types of investments could be part of a rate application process if Maine’s Office of the Public Advocate and the [Maine Public Utilities Commission] agree.”

While microgrids are often considered a way to improve reliability for communities that have them, it’s still relatively new technology.

“It’s kind of an abstract concept, because a microgrid isn’t just one technology,” said Daniel Sambor, a doctoral researcher at Stanford University. “It’s really a systems-level technology.” Basically, a microgrid includes some kind of generation and storage, as well as a “microgrid controller”— a central device that Sambor called the brain of the system.

Maine’s islands aren’t the only ones testing the concept. El Hierro, the smallest of the Canary Islands, has a microgrid that was reportedly able to power the island with 100% renewable energy for 24 days in a row last summer. The island, which has a population of about 10,800, has wind turbines and pumped-storage hydropower. As of 2019, more than half of El Hierro’s electricity came from renewables, according to Red Eléctrica de España, the Spain-based grid operator that supplies power for El Hierro.

Sambor works with remote communities in Alaska to help them develop renewable-powered microgrids. Like many of Maine’s islands, these communities are geographically disconnected from the main grid. In many cases, they rely on microgrids powered by fuel that has to be flown in by plane. If they convert to renewable power and storage, they can significantly reduce their energy costs, Sambor said. They happen to reduce pollution and greenhouse gas emissions, but that’s not why communities are pursuing them, Sambor said.

Sambor works with communities that are so remote, they have to be independent from the grid. But ideally, he said, communities with microgrids will also be connected to the main grid for reliability. So as long as Isle au Haut can maintain its cable, he said, it should. The island has no plans to cut it.

Isle au Haut’s planning process has spanned multiple years and a lot of community discussions, Wilson said. “I don’t think anybody in the community is happy that we have to do something like this,” he said, but they knew it needed to be done. He’s lived on Isle au Haut for 50 years. Like many residents, he was there when the community decided to invest in the cable. Before that, the island relied on diesel.

Community buy-in is important, analysts said. “My opinion is that a microgrid will ultimately be maintained in the long term and be successful if the community members are passionately and very involved in the process to design and build it,” Sambor said.

Technical issues, like determining appropriate fuel sources and figuring out the best storage technology, is “the easy part,” said Emma Wendt, a community development officer at the Island Institute. The institute has worked with Maine communities on Monhegan and Matinicus. Those islands have no mainland connection; instead, they use a mix of diesel and, in the case of Monhegan, some solar to power their grids.

The hard part, Wendt said, “is identifying what community members are valuing, are seeing as priorities for the community, what they want to invest in, in terms of time.”

“By building that buy-in,” she said, “and by going through the process, you end up with a much better outcome. And we’ve seen some communities in Maine do some pretty excellent things, and there will be more to come.”