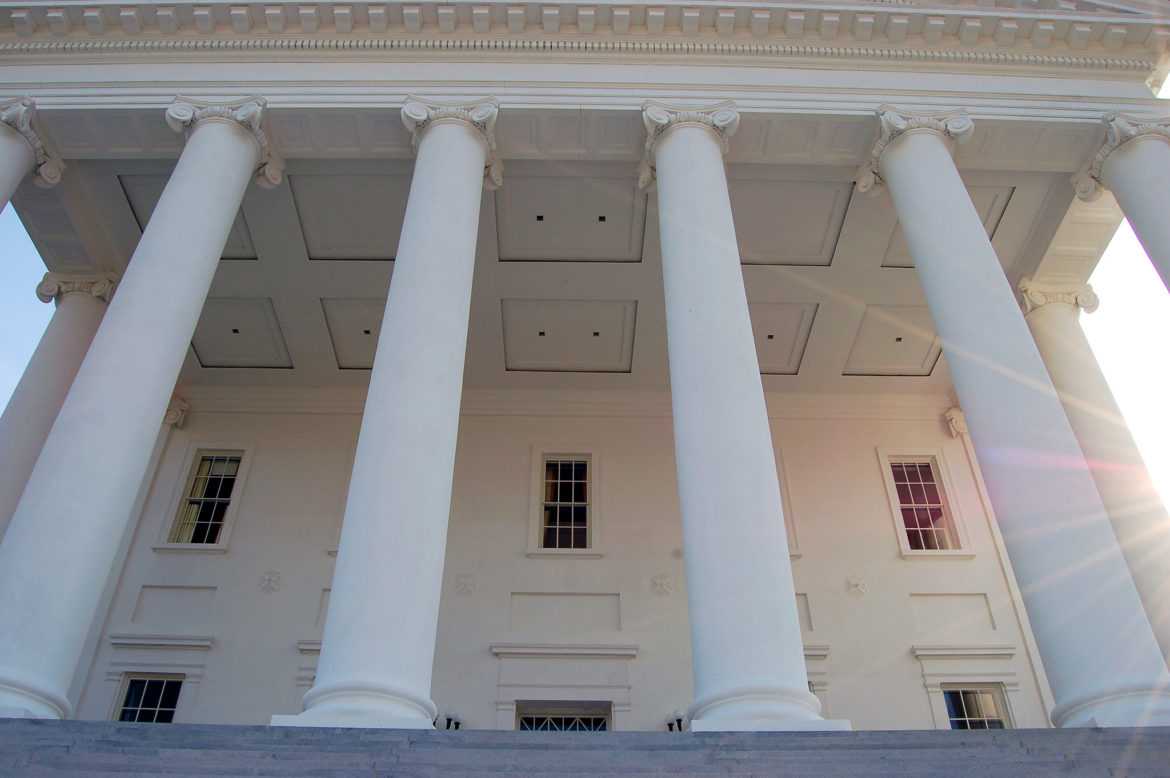 The Virginia Statehouse in Richmond. Lawmakers here are considering a proposal that would revisit a 2015 vote that allowed Dominion Energy to keep its excess profits in exchange for a seven-year freeze on its base rates.

The Fair Energy Bills Act would give state regulators power to order refunds when the utility collects excessive revenue.

The problem, they argue: Right now, the utility’s rates are excessively high.

Five years after the General Assembly voted to let Dominion keep excess profits in exchange for freezing base rates for seven years, a bill advancing in the legislature would revisit that position ahead of the company’s next rate case.

The Fair Energy Bills Act would empower state regulators to examine Dominion’s earnings, decide how much is fair, then direct the utility to refund the surplus to customers. The legislation sailed out of the House of Delegates this month on a 77-23 vote. It’s now in the Senate Commerce and Labor Committee.

“Dominion opposes it and still it got out of House,” said Will Cleveland, a senior attorney with the Southern Environmental Law Center. “But it faces strong headwinds in the Senate.”

HB 1132 has support from green groups, social justice organizations, and the manufacturing sector.

If passed, the oversight measure would apply to Dominion’s 2021 rate case, when utility regulators will examine four years of records — from 2017 to 2020 — and set Dominion’s next base rate and allowed profit level.

Dominion has overcharged customers by more than $1.3 billion since 2015, according to State Corporation Commission figures. Two sets of calculations by regulators estimate refunds would be between $7 and $9 a month for a typical residential customer.

Cleveland pointed out that a good ratemaking system is one that strikes a balance that allows a utility to earn a fair return while delivering reliable electricity at the lowest reasonable rate.

“Virginia’s system is broken,” he said. “This bill takes a big step toward repairing the damage.”

He and other advocates said that resetting Dominion’s rates via regulator oversight provides a cost offset for customers as the utility invests in solar, wind and coal ash cleanup.

“We can have a healthy debate on the least-cost way to transition to a carbon-free energy sector,” Cleveland said. “There are costs associated with it and we can’t pretend that stuff is free.”

But, he added, “we cannot do a least-cost transition when starting with rates that are too high.”

The bill’s co-sponsors — Del. Jay Jones, D-Norfolk, and Del. Lee Ware, R-Powhatan — emphasize that the bill does not prevent any funding for projects authorized under the landmark Grid Transformation and Security Act. That law, SB 966, signed by Gov. Ralph Northam in 2018, declared 5,000 megawatts of solar and wind to be in the public interest.

Simply put, an energy burden is the ratio of a household’s electricity expenditures to its take-home pay. Economists agree that an affordable energy burden shouldn’t exceed 6%.

Dana Wiggins, VPLC’s director of outreach and financial advocacy, said it’s high time to revisit a base rate that hasn’t been deeply examined since the 1990s.

“This type of bill would help ensure that the next regular rate review in 2021 is based on more accurate, up-to-date data, helping ensure electric utility customer rates set by the commission are more fair moving forward,” Wiggins said.

Daudani said Dominion welcomes “a conversation about how to make our rates even better, especially for low income customers, while we work to provide clean and renewable energy for our customers.”

He also disputed claims by advocacy groups and co-sponsors of the Fair Energy Bills Act that Virginians are saddled with the seventh-highest electric bills in the country.

“Comparing bills to rates is mixing apples and oranges,” he said, adding that such a comparison ignores the state’s hot, humid summers and the reality that most Virginia customers have electric heat, not fuel oil.

Richmond-based Dominion is the largest electric utility in Virginia, serving 2.5 million customers in the northern, central and southeastern regions of the state.

Daudani said Dominion’s rates are “below” the national average and “well below” Northeast and Mid-Atlantic states.

“We intend to keep this advantage, while also building the nation’s largest offshore wind project off Hampton Roads and providing solar energy options across the state. And we’re doing this while making the investments needed to keep the lights on 24/7.”

The potential monthly savings of $7 to $9 for Dominion’s residential customers was calculated by staff at the State Corporation Commission’s Division of Utility Accounting and Finance per the request of Jones and Ware.

In a Feb. 11 letter to the two delegates, division director Kimberly Pate noted that “costs recovered from customers through rate adjustment clauses such as offshore wind or solar will not be affected by any potential base rate bill change and will likely continue to increase in the aggregate.”

It was a far different General Assembly that voted in 2015 to allow Dominion to freeze its base rates for seven years and keep its excess profits. The utility said such action was necessary to counter the financial uncertainty it feared the federal Clean Power Plan would unleash. However, the Trump administration quickly shredded the plan, which had been rolled out by President Barack Obama’s Environmental Protection Agency.

“I would hope the Senate committee will recognize that this is a very positive bill for constituents and take it up,” Cleveland said. “Then I hope the whole Senate does what the House did and pass it on a broad bipartisan vote.”

Cassady Craighill is a spokesperson for Clean Virginia, a Charlottesville-based organization that advocates for clean government and clean energy.

She pointed out that the bill also has the support of the attorney general’s office, data centers and other large energy users. The Virginia Manufacturers Association gave it a thumbs up on Friday.

Craighill also emphasized the importance of approving the measure this legislative session — which ends in early March — because the next scheduled rate case isn’t until 2024.

“Passing it now is essential to the 2021 rate case,” she said. “If it’s muzzled now, it will be another three years. If we’re going to move forward, we need to empower the State Corporation Commission to look at Dominion’s books.”