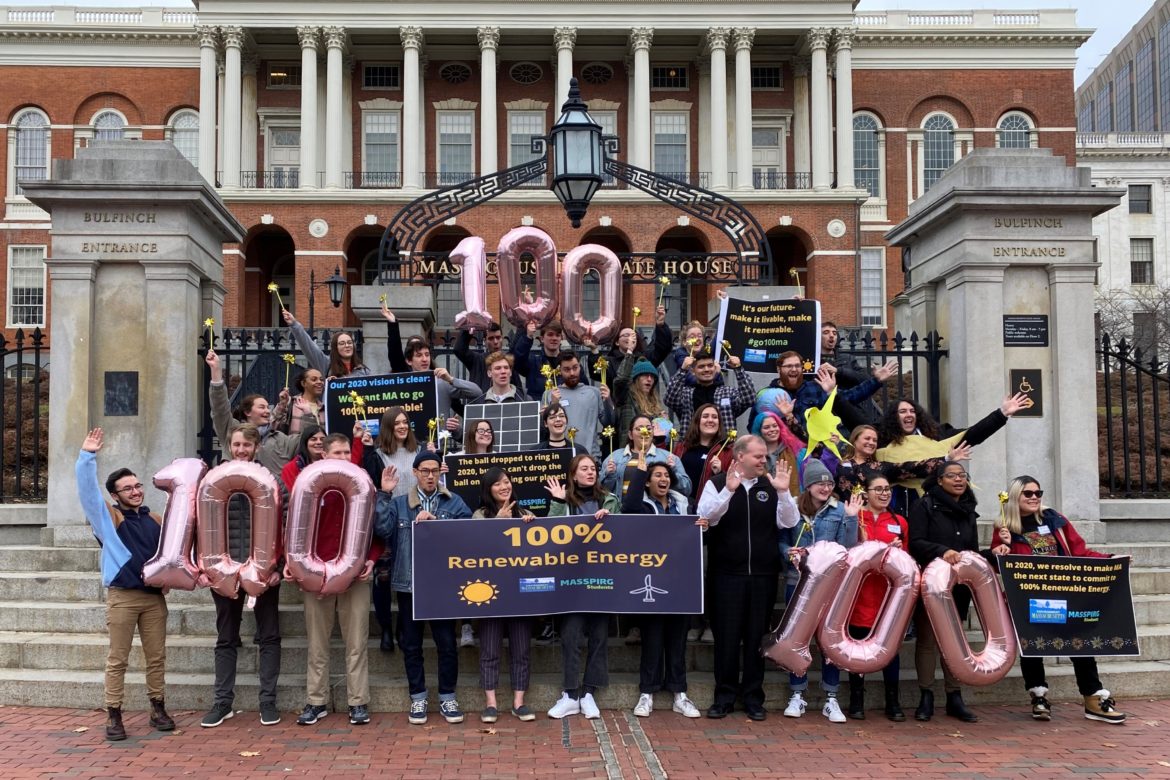 Student climate activists and supporters gather at the Massachusetts State Capitol in praise of a plan to transition the state to 100% renewable energy.

Student campaigns are underway on more than a dozen campuses demanding a transition to 100% renewables.

As momentum grows in Massachusetts for greater adoption of renewable energy, student activists are playing an increasingly vital role in the movement.

Student groups on college and university campuses across the state are attempting to convince their schools to commit to using only renewable energy, and they are joining in the fight for a new bill that would transition the state to 100% renewable energy.

“Young people are so important to the conversation because climate change is the biggest issue facing our generation,” said Julia Seremba, a campus organizer with the Massachusetts Public Interest Research Group, or MassPIRG. “We are really the generation that are going to endure some of the worst effects of climate change, and we are also poised to do something about it right now.”

While the shift to renewable energy must happen in all sectors, colleges and universities are powerful targets for change, Hellerstein said. As education and research institutions, he said, they have the power to influence how people understand issues, so it is essential that they lead by example on the issue of renewable energy.

Furthermore, these institutions are large enough to make a difference in emissions on a community level, he said.

“They are large consumers of energy, often some of the biggest in their communities,” Hellerstein said. “So the decisions they make about how they procure their power could have a big impact.”

As larger, established advocacy groups, MassPIRG and Environment Massachusetts use their resources to help train and guide the student activists. Environment Massachusetts has created a “toolkit,” a set of fact sheets that provides background, data, and case studies on topics including on-campus solar, energy efficiency, microgrids, and sustainable transportation. MassPIRG campus organizers work with student groups to teach them how to run strategic campaigns to most effectively tackle the issues.

Still, Seremba emphasized, the students themselves are the ones driving their activities.

The students’ campaigns involve a range of tactics, including meetings with administrators, collecting petition signatures, writing opinion pieces for campus and local newspapers, building relationships with faculty members who have energy or sustainability expertise, and sharing messages on social media.

More than 100 colleges and universities operate in Massachusetts, making it one of the most college-dense states in the country. And the state is widely considered one of the most environmentally progressive. Still, relatively few schools have made the leap to 100% renewable energy sourcing.

Bunker Hill Community College, Emerson College, and Boston Architectural College, all in Boston, as well as Bentley University in Waltham, buy renewable energy credits equal to their energy consumption. In 2018, Hampshire College in western Massachusetts became the state’s first school to get all of its power from on-campus solar arrays. That same year, Boston University announced an agreement to buy enough energy to power its entire campus from a new wind development expected to start operation in late 2020.

Boston University’s commitment to renewable energy has benefits beyond the environmental, said Dennis Carlberg, the school’s associate vice president for university sustainability. The deal the university struck with the wind developer includes internship positions for students and research opportunities for faculty and students. In May, for example, a dozen students will travel to a turbine manufacturing facility in Florida and the wind farm site in South Dakota.

“There are research and educational benefits to this,” Carlberg said.

Campus organizers are also getting involved in the campaign to pass a bill that would require the state to transition to 100% clean energy by 2045. Their major goal, Seremba said, is to spread awareness of the pending legislation among young people and then get students to express support for renewable energy through petitions or social media. Legislators, she said, need to know that young people are worrying about the future and paying attention to what they do.

Seremba, who began her work with MassPIRG as a student at the University of Massachusetts in Amherst, said she has seen a lot of progress on the issue of renewable energy since she first became involved. And it makes her optimistic.