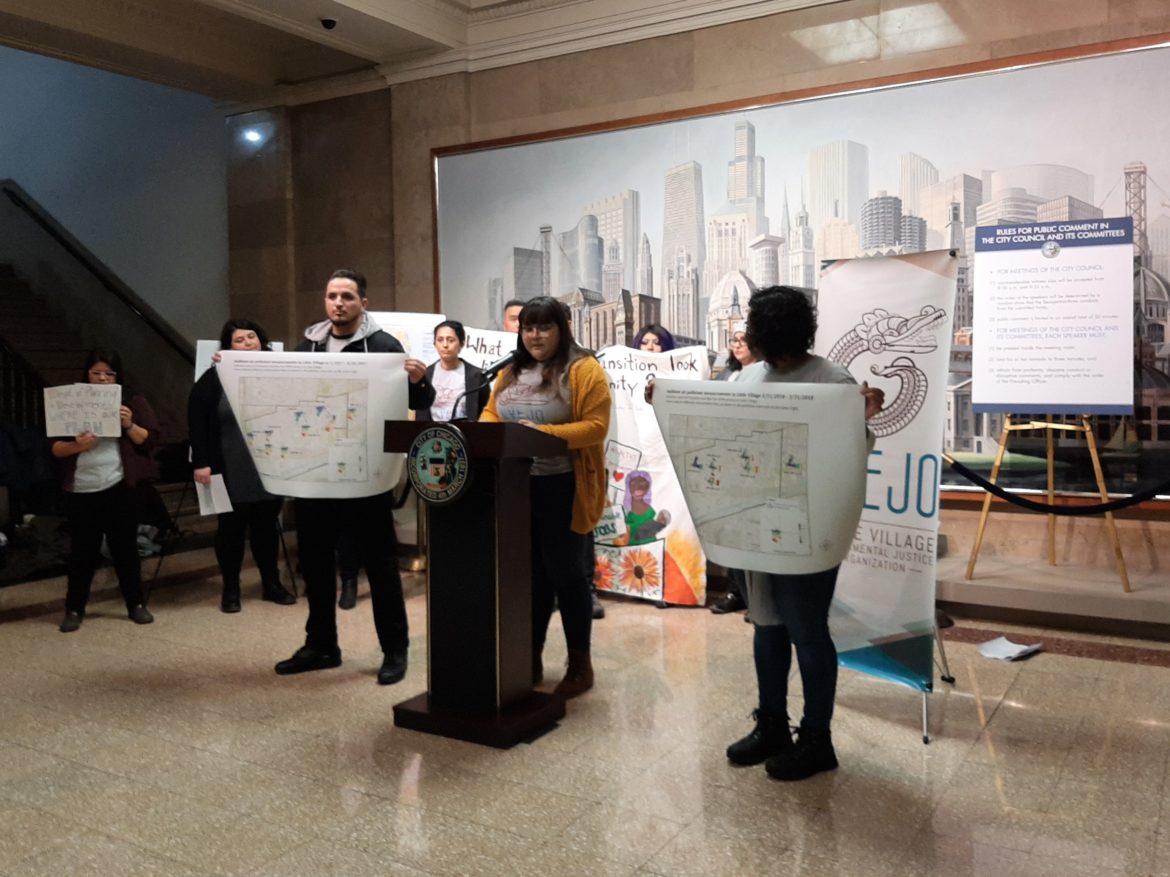 Little Village residents worry pollution from truck traffic will be more harmful to the neighborhood than coal emissions.

Residents of Chicago’s Little Village neighborhood are demanding answers from city and county officials regarding the site of a coal plant that closed in 2012 and is now slated to become a 1-million-square-foot warehousing center that will draw scores of diesel trucks through the neighborhood.

After the death of a worker doing coal plant demolition and the recent announcement that Target will be the anchor tenant of the warehouse, residents and organizations held a press conference at City Hall Wednesday demanding that city and county officials cancel a $19.7 million tax break reportedly awarded to the global development company that owns the site, and relaunch a public process to decide the fate of Little Village’s manufacturing corridor.

“This is not simply ‘not in my backyard,’” said Kim Wasserman, executive director of the Little Village Environmental Justice Organization, known as LVEJO. “This is about environmental racism. Folks not only know what’s wrong in the neighborhood, they know how to fix it. So if the city would actually bother to listen to our communities, we know how to solve these problems.”

A year ago the city halted its public process around a draft modernization plan for the area’s industrial corridor, in the wake of strident criticism of the plan, which residents feel prioritizes warehousing and distribution over more environmentally friendly and beneficial development. The coal plant site is a prime example of that focus, residents say, with plans for the warehouse complex approved and implemented before the industrial corridor planning process was complete.

On Wednesday, the groups also demanded the city institute continuous air monitoring in the community, and commit to do a traffic study every five years. Residents and public health experts have argued that the new warehousing facility could be even more harmful than the coal plant, since particulate from diesel emissions is smaller and able to penetrate from blood vessels into organs, and since diesel emissions are at ground level and within densely populated areas.

LVEJO organizer Nancy Meza noted that the group’s surveys show between one and four semi trucks passing per minute on busy commercial and residential strips in the neighborhood, even before the new warehouse center is open.

Hilco Development Partners, which bought the coal plant site in 2017, declined to comment or answer questions, referring the Energy News Network to its website for updates.

News featured on the site includes the company’s purchase of $75,000 worth of children’s shoes, which they distributed in Chicago and other cities, and the awarding of $18,000 worth of scholarships to area students.

As LVEJO organizer Edith Tovar pointed out, the Spanish version of the website includes no recent updates (more than half of the area’s residents speak Spanish). A timeline in both languages shows the project would be completed in the first quarter of this year, while in reality the coal plant is still not demolished.

The coal plant site “is being demolished and redeveloped to benefit companies, not the residents who fought for 12 years to shut the plant down,” Tovar said. “Enough with corporate handouts to polluters. We hope Target is willing to work with us, unlike their absentee landlord.”

At a meeting last summer and at various times since, Little Village residents have voiced concerns about the impacts of the coal plant demolition on their health and environment, and demanded more information, air monitoring and other safeguards from the city and state.

In January, a 54-year-old worker fell to his death while trying to climb onto an elevated platform at the old coal plant. Reynaldo Grimaldo’s wife sued Hilco and the company’s partners, alleging negligence, and work on the demolition was halted. U.S. Rep. Jesus “Chuy” Garcia is demanding an expedited federal investigation, Block Club Chicago reported.

Residents have demanded that the coal plant site be repurposed in a way that benefits the community and helps heal the harm done by decades of emissions. The city’s draft industrial corridor modernization plan, released last year, seems to ignore a lengthy community engagement process that involved city officials, residents, architects and nonprofit organizations after the coal plant’s closure.

The report that came out of that effort is acknowledged in the city’s draft plan for the Little Village industrial corridor. But the draft plan notes that it supersedes all previous plans, and emphasizes Little Village’s role as a transportation and distribution hub. Most of the city’s 25 other designated industrial corridors are focused on manufacturing or information technology.

A spokesperson for the city Department of Planning and Development did not respond to a request for comment.

The city’s draft plan does call for increasing sustainability in the corridor, including through solar panels on industrial rooftops, increased green space, improved bike lanes and public transit, innovative industries, and other improvements that mirror long-standing community demands. But many residents say they are upset that the overall emphasis of the plan seems to be on job creation and infrastructure improvements centered around distribution and transportation.

The city draft plan notes that Little Village is in the 95th percentile statewide for exposure to fine particulate matter (PM2.5), and in the 89th percentile for diesel emission particulate. It also notes that based on the EPA’s EJScreen tool, characteristics of Little Village “make this community more vulnerable to pollution than nearly all other communities in Illinois.”

Hilco also owns the site of another former coal plant in the Pilsen neighborhood about five miles away, having bought both sites from energy company NRG, which purchased the coal fleet of Midwest Generation after that company went into bankruptcy. Pilsen residents have likewise raised concerns about the impacts of warehousing and trucking on the community.

LVEJO is also collaborating with the group Warehouse Workers for Justice in demanding that city and state officials pass regulations to improve the quality of warehouse jobs. Warehouse Workers for Justice associate director Roberto Clack cited the group’s research at a massive warehousing complex southwest of the city, documenting pervasive gender and racial discrimination and confirming that the majority of warehouse jobs are filled through temporary staffing agencies that offer little opportunity for advancement.

“We need robust community input when we bring warehouses into communities,” he said, also citing the recent announcement that Amazon will open a major warehouse in the South Side Pullman community. “We shouldn’t give tax breaks to anti-union companies like Amazon, Target and Hilco, and more needs to be done to mitigate the pollution caused by them.”