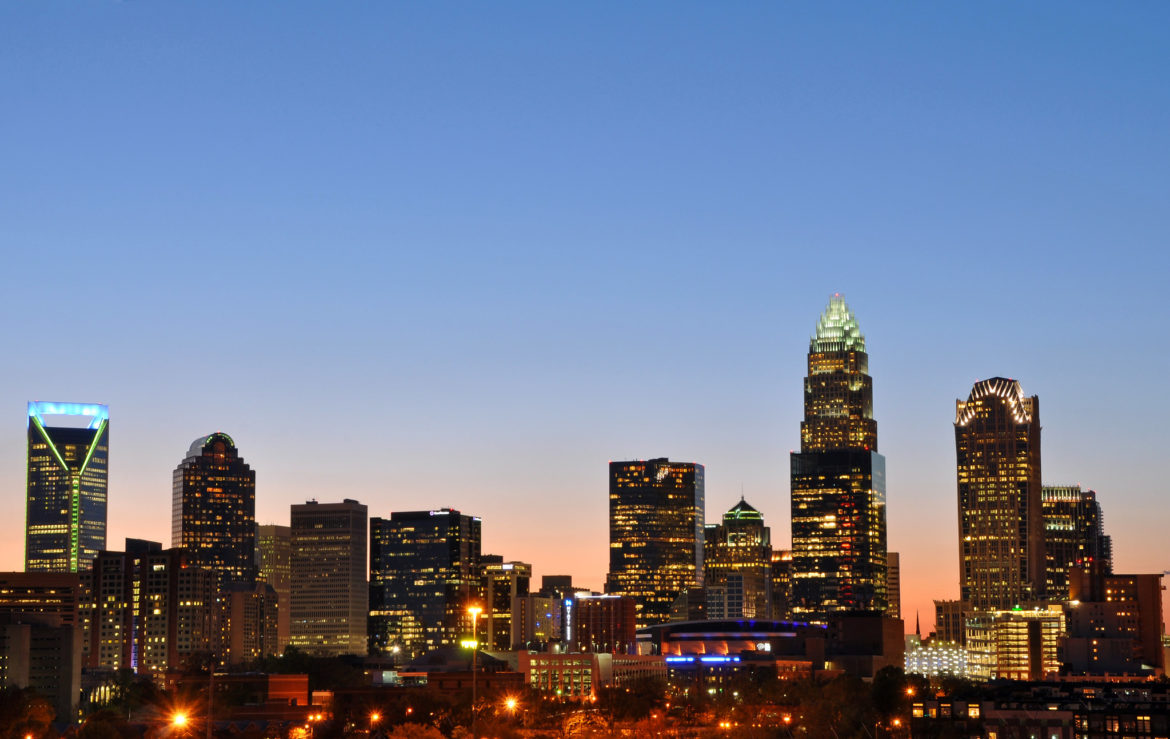 Charlotte, the largest city in North Carolina, will buy the output of a 35-megawatt solar farm to power 25% of its municipal building electricity needs — making the city the first customer to opt in to Duke Energy's green tariff program.

The North Carolina city aims to power municipal buildings with zero-carbon energy by 2030.

After months of planning, Charlotte, North Carolina, has made it official: The city will meet a quarter of its municipal building electricity needs with solar power.

An agreement approved unanimously Monday night allows the state’s largest city to buy the output of a 35-megawatt solar farm in Iredell County, using Duke Energy as a go-between.

The arrangement makes Charlotte the first customer to opt in to Duke’s Green Source Advantage program — created to enable large customers to buy renewable energy but so far attracting much less participation than envisioned.

Similar deals are beginning to help cities around the country meet aggressive clean energy goals. Charlotte, which aims to power municipal buildings entirely with zero-carbon energy by 2030, is the biggest so far to use the strategy for industrial-scale solar.

While the city will pay a premium for electricity in the first 10 years of the 20-year contract, officials expect it will save money on the back end to the tune of $2 million. A project of Carolina Solar Energy and Ecoplexus, the solar farm will be up and running by 2022.

“We’ve been working on this a good bit of time,” said Katie Riddle, sustainability analyst with the city. “We’re confident that this a really great opportunity for Charlotte that would benefit all of our businesses and residents.”

‘Pretty hard to do in North Carolina’

Charlotte is among nearly two dozen North Carolina cities and counties and hundreds around the country who’ve pledged to power their buildings and transportation fleets with all no-carbon or renewable sources in the coming decade.

Most of these communities face huge technical and bureaucratic challenges. Many are wed to their monopoly electric service provider and lack their own source of power. In North Carolina, they can only buy electricity from a regulated utility like Duke, which plans to produce over 40% of its electricity from fossil fuels past 2030. Local governments can install their own solar arrays, but rooftop space is limited and if land is available, it’s difficult and expensive to acquire.

To help overcome these hurdles, the American Cities Climate Challenge chose Charlotte in December 2018 to be among the 25 U.S. cities that would get tools, resources and technical help from experts in the field.

“For the past year now, our team has been working with them to assess the financial and technical feasibility of going through with this,” said Ali Rotatori, the senior associate at the Rocky Mountain Institute assisting the city as part of the challenge. “One of their goals was to procure large-scale renewable energy.” But, she said, “it’s pretty hard to do in North Carolina.”

Green Source Advantage provided a pathway. Under the program, required under a wide-ranging 2017 energy law, Duke contracts to buy electricity from a renewable power producer. The utility sells the same amount of electricity to a large customer like Charlotte. The customer pays for the renewable power, plus an administrative fee, and gets a bill credit for whatever Duke would have spent to produce the energy itself, a figure called “avoided cost.”

Duke can’t count energy produced through the program toward its fulfillment of the state’s renewable energy standard, which means customers like Charlotte can legitimately claim their buildings are being powered by renewables, even though they aren’t buying the solar electrons directly. “These are 100% incremental megawatts, over and above what would have been done otherwise,” said Carson Harkrader, CEO of Durham-based Carolina Solar Energy.

So far, Duke has drawn only four applicants totaling 219 megawatts, all in Duke Energy Carolinas territory. Critics say that’s partially due to the program’s design flaws, some baked in to the 2017 law itself. For instance, they complain the avoided cost rate is too low and only fixed for five years rather than for the full life of the contract.

But Charlotte was eager to participate even on those terms, in part thanks to the Cities Climate Challenge. “With that support, we were able to project the rates we could expect with the program and it penciled out,” sustainability analyst Riddle said. Plus, the city put out a request for proposals and “underwent negotiations with the highest quality responders.”

Carolina Solar Energy was among them largely because the 2017 law helped shift solar development to the central and western parts of the state — away from the east where solar interconnection queues remain long — and Harkrader was ready. “We saw it as a new market area,” she said. For the Iredell project, “we had defined a project idea. We had taken all the early development steps needed.”

While Harkrader’s company and partner Ecoplexus will get a fixed price for 20 years, Charlotte’s projections show Duke’s avoided cost rate will inevitably rise. That means the project will cost a premium in the first ten years but save money in the latter years. Staff say the short-term costs can be absorbed by various departments’ operating budgets.

‘We’re working on it’

At least two more Green Source Advantage contracts will be signed and announced soon. The company has asked for permission to open up its Duke Energy Progress allotment to projects in Duke Energy Carolinas territory. If regulators allow it, a third project in addition to the Iredell County solar farm could go through. All told, the participants represent a “good cross section of the various sectors,” said Christy Daniel, Duke’s managing director of renewable customer solutions.

If neither the university system nor military bases apply to the program by the end of the year, another 350 megawatts will be available for cities and other large customers. One way or another, Duke is hopeful that all 600 megawatts will be utilized.

But Daniel also acknowledges the initiative may need to evolve. “Things are going to continue to develop as customers work with us to figure out what best meets their needs,” she said. “This was a really good next step along the path. Certainly, there are things we can do in the future to keep advancing the program.”

Meanwhile, Charlotte still has another 75% of its buildings to decarbonize. Asked about how it would get there, Riddle says the city is hoping Duke’s grid will get cleaner, and she and her colleagues were doing “due diligence” on exploring rooftop solar on municipal buildings and community solar. In short, she said with a small laugh indicating the enormity of the task, “We’re working on it!”