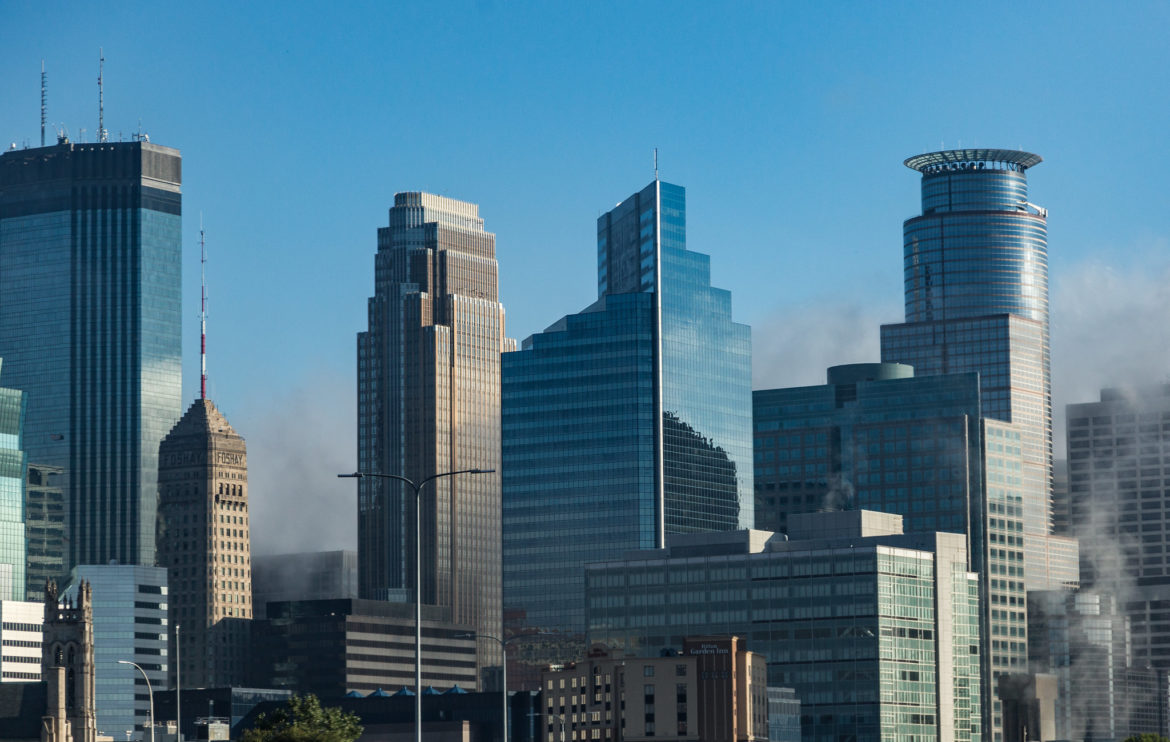 Downtown Minneapolis. Building owners under a city benchmarking ordinance here reduced their energy use 5.5% from 2015 to 2018.

The energy use intensity of larger commercial buildings in Minneapolis declined by 5.5% between 2015 and 2018.

Minneapolis was among the first major cities to require commercial building owners to measure and report energy use. The data is posted in an annual report on the city’s website.

The four years worth of numbers publicly available so far indicate that the weather-normalized energy use intensity of buildings covered by the program fell 5.5% from 2015 to 2018.

“I’m pretty pleased with that reduction, and that’s in line with what we’ve seen in other cities” with benchmarking policies, said Katie Jones, community program and policy manager for the Center for Energy and Environment, which has collaborated with the city on its program.

One caveat: It’s unclear how much of that decrease would have happened anyway, driven by market demand and potential energy cost savings. However, research taking those factors in account in other cities has credited the policies with having a significant impact. A 2017 report by Lawrence Berkeley National Laboratory found that cities with benchmarking laws saw 3% to 8% reductions in gross energy consumption or energy use intensity over a two- to four-year period.

Minneapolis was already a national leader in efficiency, which makes the precise impact trickier to pinpoint. Anecdotally, multiple building owners said they had already planned investments in efficiency before the ordinance took effect.

The Basilica of St. Mary, one of the biggest efficiency gainers since the ordinance, decreased consumption by more than 21% since 2014 by replacing aging boilers, swapping window air conditioning units for central air, and upgrading lighting to LEDs. The massive church needs less cooling now because LEDs give off less heat, said buildings and grounds director Dave Laurent.

The city gave the basilica an award for its energy improvements, but Laurent confessed that benchmarking provided no impetus for the projects. The church needed new equipment, and utility programs were generous enough — and the return on investment quick enough — to warrant efficiency investments. “We still want to do more,” he said.

Other building managers say the benchmarking scores, or the tools used for reporting them, helped spur them to act. One senior living cooperative went through a major efficiency retrofit just before it was required to enter the benchmarking program. The Portfolio Manager tool allowed Becketwood maintenance supervisor Brandt Pfeiffer to compare the building to other large apartments and confirm the value of the investment.

“We did a lot of our projects to save money and improve indoor air quality,” Pfeiffer said. Submitting data to the city “gave us the solid numbers on how much money we were saving, and the benchmarking helped prove it.”

Commercial real estate professionals say building owners care greatly about energy use, and many have employed benchmarking for decades without ordinances compelling them to do so. They quibble a bit about whether the city’s benchmarking ordinance has much to do with improved scores.

Minnesota Commercial Association of Real Estate/Realtors executive director Matt Anfang said he applauds building owners who seek Energy Star or certifications from the U.S. Green Building Council, but he doesn’t like government intrusion into the market.

“I have no issue with any entity or tenant that wants to hold energy efficiency to a high standard when they choose to pursue a lease with any given property,” he said. “Not all tenants demand this market, which is why I am not sure exactly why a municipality or other governmental unit needs require every property to be tracked.”

Maxfield Research & Consulting president Mary Bujold has conducted market analysis for more than 35 years in the Twin Cities. Energy efficiency and green buildings are a hot topic in the commercial real estate market locally and nationally, she said.

Many commercial real estate companies use national benchmarking scorecards, either Energy Star or others, to compare the energy performance of buildings, she said. But Bujold said she had not heard of building owners seeking to purchase properties using Energy Star ratings available on the city’s website.

“I’m not sure they’re using the city’s scorecard but they’re using national scorecards and considering how buildings perform from an energy and operations standard,” she said.

The ordinance has had a more clear impact in connecting low-performing buildings with utility programs and the city’s efficiency grant program. Funding exists for buildings struggling with high energy costs through the Green Cost Share program, which provided money for 12 projects. They included a handful of parking lots, apartment buildings, and small businesses, said Patrick Hanlon, director of environmental programs.

With building owners now accustomed to benchmarking, the next step for Minneapolis will be greater outreach to owners and managers of poorly performing buildings. The city recently hired a staffer to connect commercial building owners whose properties were in the bottom quartile of Energy Star benchmarking data to utility programs and city resources such as its green cost share program.

Those buildings will be required to have a free energy audit provided by either the city or utilities, Hanlon said. Property owners and managers can then decide whether they will take advantage of utility and city-operated energy efficiency financing programs or make their investments.

Part of the city’s energy evaluation requirements will include a pilot that will offer downtown building owners an opportunity to combine audits from Xcel Energy and natural gas supplier CenterPoint Energy. For years Minneapolis homeowners could receive energy audits combining checks on electricity and natural gas use. Now, commercial building owners will have the same option.

The benchmarking program remains a work in progress, with the addition over the next few years of smaller apartment buildings and single-family homes at the time of sale. As concerns over the climate crisis have grown, even one-time critics of benchmarking policies have come to embrace them.

The Greater Minneapolis Building Owners and Managers Association initially objected to a few issues within the ordinance but has since created an energy and environment committee that works to improve building efficiency.

“If you asked the rank and file, it’s not that big of a deal,” said president and CEO Kevin Lewis. Many members, he noted, have made efficiency improvements based less on benchmarking and more on the “robust” utility rebate programs available to help pay for projects.

Compliance has not been an issue as property owners and managers have grown accustomed to the process, according to Jones; the city has received data for 93% of commercial buildings.

Meanwhile, the policies are spreading to other nearby cities. In January, St. Paul passed an ordinance to collect water and energy use data from commercial and government buildings. And in the past year, suburban St. Louis Park and Edina approved similar energy and water benchmarking laws. Several Minnesota cities will consider benchmarking requirements this year.

Energy Star studies show as much as 30% of the energy used by buildings goes to waste. Those kinds of statistics mean the work is far from over in Minneapolis — a point city officials acknowledge.

“To meet the city’s climate goals we need to see more improvements out of this sector both in multifamily and commercial buildings,” Hanlon said. “There’s more opportunity out there.”