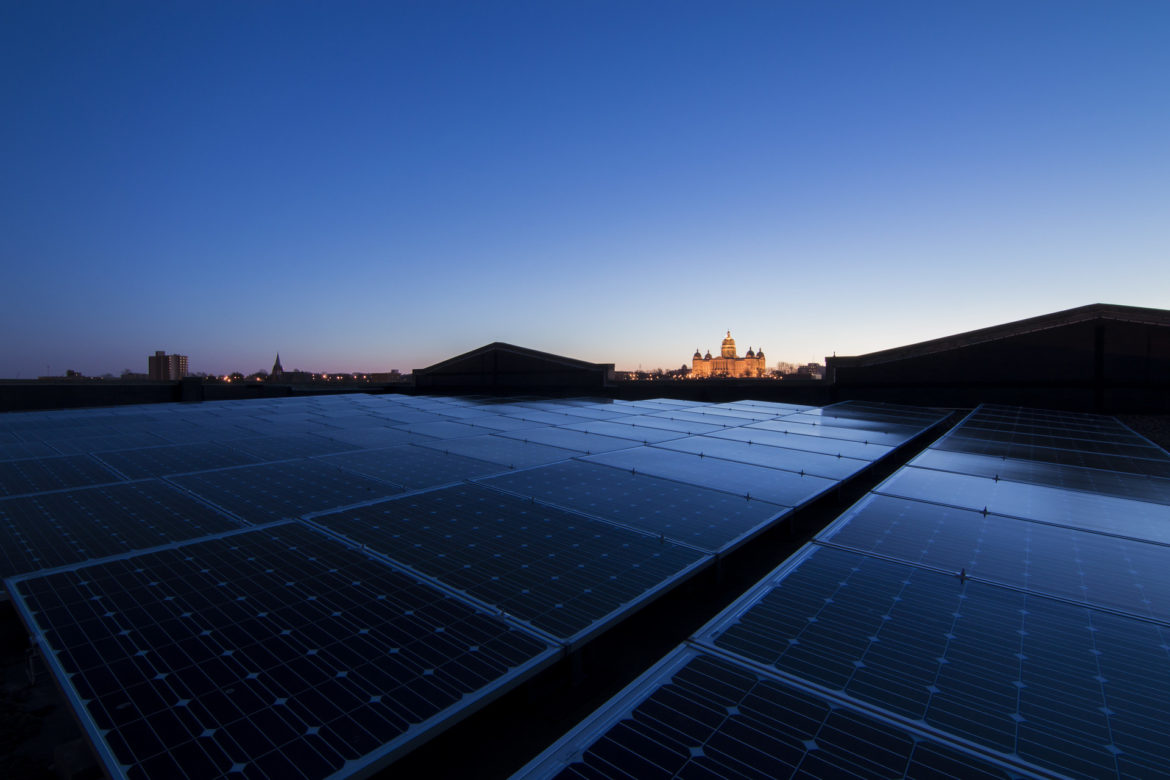 Illuminated in the distance, the Iowa Statehouse in Des Moines. Lawmakers here are considering a net metering bill crafted as a result of an eight-month effort by solar advocates and the state's largest utility to come to an agreement over how solar owners are compensated for the extra power their panels generate.

A proposal, which still needs to pass in the legislature, would preserve net metering and let utilities recoup costs faster.

After years of tussling over net metering rules, Iowa solar advocates and the state’s largest utility finally found common ground recently on one core point: They all want the policy ground to stop shifting beneath their feet.

After multiple fights before state regulators and a conflict-riddled 2019 legislative session, the two parties last spring decided to try to talk their way to agreement.

In January, they were able to bring a bill to the legislature that satisfies both sides. The proposal largely maintains net metering as is, but it allows MidAmerican and the state’s other large utility, Interstate Power & Light, the option of measuring energy produced and energy consumed at more frequent intervals. That would provide the utilities with more accurate estimates of the amount of power sent to and taken from the grid.

“You don’t see too many examples of utilities sitting down with environmental groups and trade associations and coming to this conclusion,” said Tyler Olson, a solar installer who was involved in the negotiations and who served in the Iowa legislature from 2007 to 2015. “The real beauty of this agreement is you have entities that have been on different sides of legislation coming together to say, ‘This is something we can agree on and it achieves each of our goals.’”

MidAmerican spokesperson Tina Hoffman said the company “is proud to be part of many conversations since last year’s legislative session to put together compromise language that benefits all of our customers.”

The bill includes a longstanding wish of the solar industry and its supporters by requiring that a “value of solar” study be conducted by an outside party. An assessment of distributed generation sources’ costs and benefits to the grid could get underway beginning as early as July 2027, or sooner if distributed generation grows quickly enough. A study could get started when solar penetration reaches 5%. It’s now at about 1%.

The hope among the solar industry and its allies is that such a study might help resolve some of the perennial, conflicting claims about the financial impact of customer-owned solar panels on other customers. Utilities often claim solar increases costs on other customers, while solar advocates point to their benefits to the grid.

“I think this helps to resolve that disagreement,” said Olson, president of SiteGen Solar and secretary of the Iowa Solar Energy Trade Association.

The compromise also will allow the solar industry to shift its resources toward more proactive policy discussions, said Tim Dwight, president of the solar association and owner of solar installer Integrated Power Contracting. They’ll be able “to come up with plans that are going forward instead of, ‘We got done with the battle this year; next year, what’s it going to be?’”

The sheer animosity of last session’s net metering debate largely launched the conversation that began last summer, according to Josh Mandelbaum, a lawyer for the Environmental Law & Policy Center who was involved in the discussions.

“Any time there’s legislation that is contentious,” he said, “the legislature is interested in seeing the two sides come together.”

Kerri Johannsen, who directs the energy program for the Iowa Environmental Council, recalls that solar promoters invited MidAmerican to begin discussions, and that the utility quickly agreed. Early on, she said, one important point of agreement rose to the surface.

“I think MidAmerican was looking for certainty in terms of what they could expect. We were all looking for that. That’s a reason we all came to the table.”

Each side tried to narrowly define its goal at the outset, she said.

“We started off with really trying to get to what was it that each side was really trying to accomplish, versus starting with, ‘Here’s my solution; here’s your solution, and we’re a million miles apart.’ We tried to boil it down to, ‘What do we each need at the end of the day?’”

Progress was apparent at every meeting, Johannsen said, which compounded the momentum to return for more talks.

Olson said one important feature of the conversation was “looking for common ground as opposed to solely focusing on our own interests. It’s more a consensus than a compromise. We were able to realize that each entity could get the things they believed were good for Iowa consumers without hurting the other.”

Negotiations continued into the start of the 2020 legislative session. The bill passed favorably out of the House Commerce Committee on Feb. 25 and is likely to be debated before the full House this week. Hopes are high that it will pass both chambers and go to the governor for her signature.

Potential hurdles still await, however. State regulators probably will have to translate the law into a set of rules, a process that could sow division.

Later, disagreements could surface over the selection of a consultant to do a value of solar study, as well as the outcome. But whatever the next difficult issue, Mandelbaum said, the eight-month conversation between former combatants could have benefits long into the future.

“When you have success with a collaborative approach on a tough issue, that certainly creates an opportunity to have additional conversation on other tough issues going forward, and perhaps a level of comfort and trust between the parties, because you’ve worked on issues in a successful way before.”