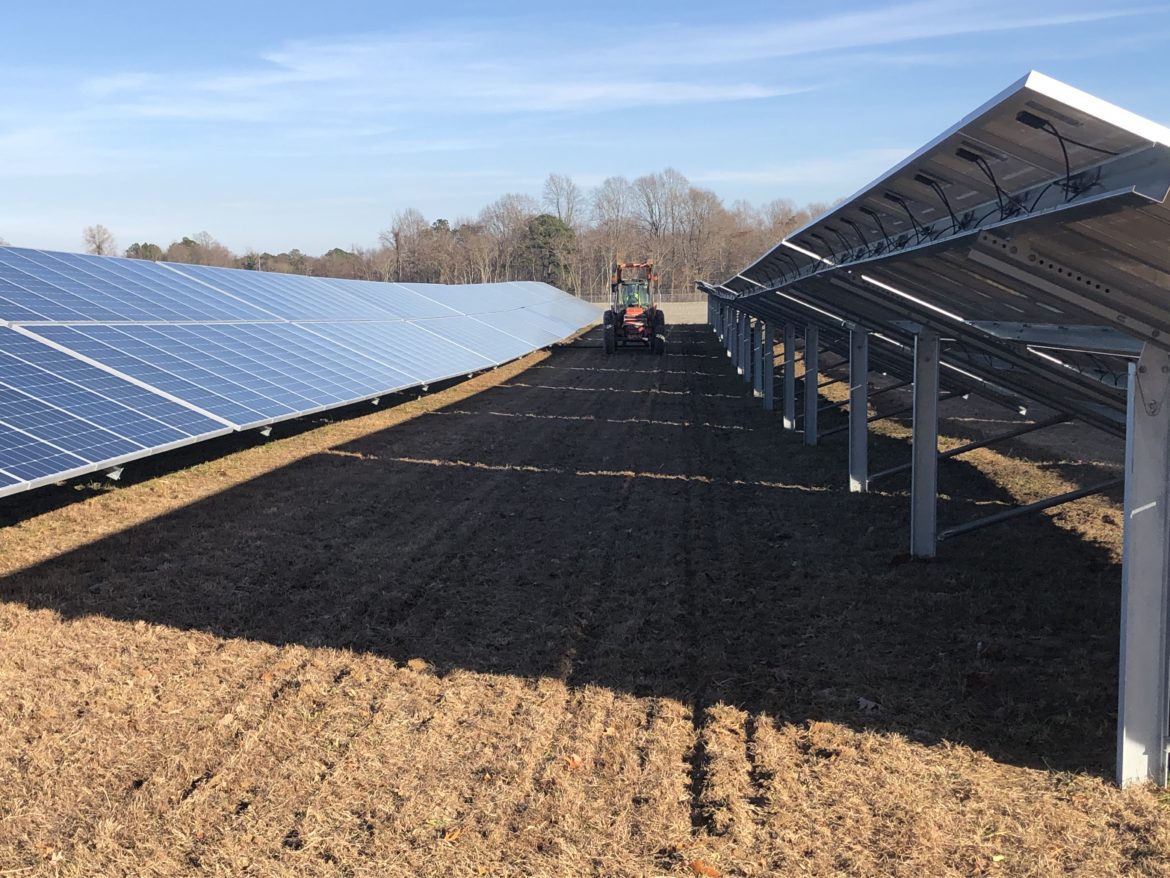 A solar project at Cople Elementary School in Virginia is the state's first project to be certified by a recently launched pollinator-smart solar program.

An elementary school on Virginia’s rural Northern Neck has earned an A-plus for blending habitat for birds, bees and butterflies with its brand new solar array.

It’s the first project statewide to be certified by the recently launched Virginia Pollinator-Smart program. And it went straight to the pinnacle by achieving “gold,” the highest possible designation.

Cople Elementary School expects to meet 100% of its energy needs via the 788-kilowatt ground-mount system that was a joint endeavor by Westmoreland County Public Schools, Charlottesville-based Sun Tribe Solar and Ernst Pollinator Service of northwestern Pennsylvania.

“My reaction was, ‘cool beans,’” is how Randi Grout of Ernst summed up being on the receiving end of the top certification. The certification was issued in January, but announced publicly this week.

As project manager, Grout coordinated the use of specialized drills in December to plant an assortment of grasses and flowers around and under the 2,100 solar panels covering 4.3 acres near the school. The native plants are expected to germinate this spring.

Grout credits Sun Tribe, which prides itself on innovation and inclusion, for being flexible and open-minded. For instance, installing the panels three feet from the ground allowed for planting throughout the array footprint instead of just on its outskirts. Research indicates that a 36-inch height is ideal for diversity in the seed mix.

“Schools, local governments, and businesses are already seeing the positive impact that on-site solar has on their budgets,” Welch said. “But pollinator-friendly projects like this one open up a whole new avenue of learning and sustainability for our communities.”

Virginia’s departments of Environmental Quality and Conservation and Recreation worked in tandem with a team of diverse representatives for more than a year to develop the Pollinator-Smart Program.

The voluntary program they rolled out in December is basically a toolkit crafted for solar installers intent on greening the footprint of their arrays by foregoing all-too-common invasive fescue grasses for native vegetation. Their theory is that more indigenous plants means less mowing.

Solar project developers can reach “certified Virginia Pollinator-Smart” status by tallying a certain number of points. Those going above and beyond the basics can earn “gold” certification.

As solar blossoms in response to more aggressive state policies, the agencies saw an opportunity to make the panels more productive. Knowing that climate change, the encroachment of development and a host of other issues are causing insect and bird populations to plummet, they opted to come to the aid of the pollinators.

The Department of Environmental Quality oversees the permitting of Virginia solar facilities at or under 150 MW. Since 2015, the regulatory agency has issued 45 permits for projects that would impact close to 25,000 acres, according to the agency. An additional 62 projects — on 36,351 acres — have been proposed.

“Virginia would like to lead by example in ecologically responsible solar development,” said René Hypes, environmental review coordinator with the conservation department’s Natural Heritage Program. “We are looking forward to receiving other pollinator-smart scorecards as solar development continues.”

Hypes, who has worked at Natural Heritage for 20 years, was an integral part of the team that upgraded and expanded the original scorecard to make it Virginia-centric and science-based. The first iteration was generic and several years old.

For instance, the team ramped up its native plant finder and its compliance scorecard.

The plant finder is part of a comprehensive manual that plugs into a more sophisticated database that shows solar developers which native vegetation will thrive in distinct regions such as the coastal plain, the Piedmont and the mountains. They also can learn how tall specific species will grow and whether they prefer sunlight, shade, dry soil or wet soil. And, perhaps most crucially, developers can discover where plants and seeds are available commercially.

Likewise, the scorecard makes it clear how developers can earn eco-points in a broad number of categories including management of invasive species, use of herbicides and whether their plantings are blooming throughout the entire growing season. One scorecard covers new solar construction, while a second version is designed for existing solar facilities being retrofitted with native species.

“This is new for us,” Hypes said. “We’re learning along the way.”

One new piece added to the toolkit is how-to guidance on sustaining Pollinator-Smart certification. It delves into the specifics of reseeding an area that isn’t thriving, preparing healthy soil and removing invasive species.

Grout, the project manager for Ernst, will be on-site at the elementary school regularly to monitor and evaluate the health of the plantings.

Robin Ernst, CEO of the eponymous pollinator service, was thrilled to share her decades of expertise with the team that redesigned the toolkit.

Her company, a division of Meadville Land Services in Cochranton, Pennsylvania, is the largest native seed producer and supplier on the East Coast.

“This is about using the land to its full potential,” she said about inspiring students by juxtaposing clean energy with landscapes that sustain wildlife that inspires wonder. “We’ve got to give back to creatures who can’t find a home or food.”

The elementary school expects to save $3.6 million in energy costs over the lifespan of the project.

“We knew we had to have a good showpiece for Sun Tribe,” Ernst said. “They were taking a leap in doing the right thing and doing it correctly.”

Sun Tribe’s Welch emphasized that this is just a start.

“This is a big step forward for Virginia,” he said, adding that he’s confident leaders everywhere will view what Westmoreland County Public Schools have accomplished “as an example worth following.”