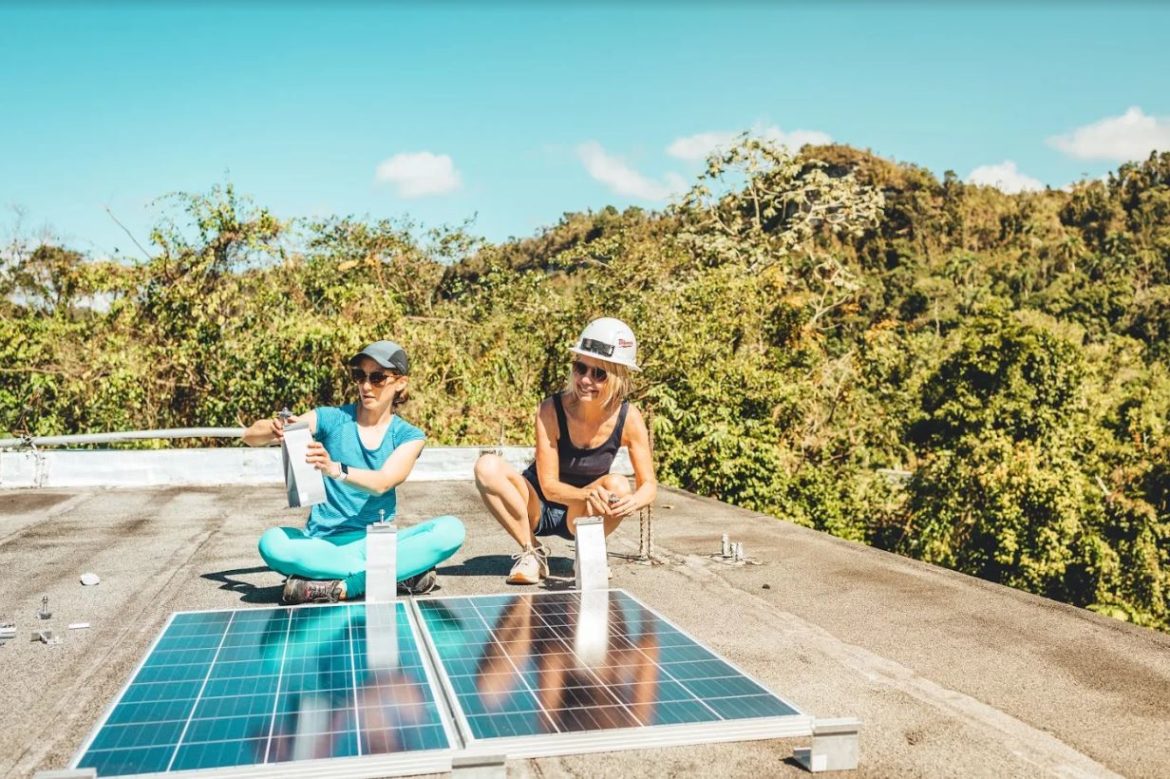 Puerto Rico seems to be in the news only after a natural or economic disaster. I had the opportunity to visit the island in February, and it was an eye-opening experience.

It shocked me to see a part of the United States where families live in tents because it’s not safe to return to their homes, and where dozens of school buildings are abandoned and empty of children. A perfect storm of natural disasters — often exacerbated by climate change — along with economic stress, a failing electricity grid and political troubles, have prevented this beautiful island from fulfilling its promise. Still recovering from Hurricane Maria, millions of dollars of aid have failed to provide a truly resilient home for its residents.

My most important takeaway is that effective disaster response should send solar and batteries.

I traveled to Puerto Rico as an advisor to the Footprint Project, a Minnesota-based nonprofit that deploys mobile solar microgrids to provide electricity for disaster relief; its Solar Energy Rapid Response Taskforce is currently deployed in Puerto Rico in response to January’s earthquakes. Its founder, Will Heegard, founded the organization after his experience with Team Rubicon, which recruited Spanish-speaking medics to the island immediately after Hurricane Maria in 2017.

As Heegaard took blood pressures and checked blood sugars at relief stations, patients would tell him about family members that are diabetic or on CPAP or have other medical problems that require electricity.

“We have a generator but we can’t get fuel because the fuel lines are too long,” he recalls hearing, and “Blood pressure is great but what would really help is some solar panels and a battery, to save my 86-year-old grandma who needs to store insulin, but no one in the community has a refrigerator with power.”

This is the nexus between natural disasters and energy.

As University of Minnesota Professor Gabe Chan recently told MPR News, “Hurricane Maria had between 3,000 and 5,000 deaths, and the majority of those deaths were attributed to a lack of energy.”

This is a new reality we must be prepared to face. As temperatures rise globally, we can expect more climate change-fueled disasters, and not just on islands and coastal areas. Increasing temperatures bring more intense storms and droughts; more water vapor is evaporated into the atmosphere, fueling more powerful storms; and rising ocean temperatures and rising sea levels can increase tropical storm winds and waves.

Given this reality, our disaster relief strategies should anticipate the need for resilient power. Instead, what I learned in Puerto Rico is that conventional disaster assistance actually makes things worse when it comes to sustainable energy solutions.

After Hurricane Maria, the Federal Emergency Management Agency (FEMA) installed 1667 generators across the island, many the size of trucks, using 10,000 gallons of diesel a day. Not only does this mean climate-disaster relief, in fact, has a very dirty climate footprint; we also were reminded by Bahamian leaders at the Clinton Global Initiative’s Action Network on Post-Disaster Recovery that diesel to fuel generators cost hundreds of dollars to operate, beyond the means of most hurricane-affected residents.

While well-intentioned, this pattern of short-term disaster solutions can have a “paperweight” effect —sending equipment that communities don’t have money or capacity to support over time. Heegaard, who built his first emergency electricity system as a Burning Man medical station, said during our tour of their mobile trailers that disaster relief efforts generally “send the wrong stuff.” Instead of diesel generators, plastic water bottles, and blue tarps, we should be sending “solar plus batteries, water filters, and resilient, sustainable shelters.” Instead, disaster relief is mostly powered by fossil fuels: flights, shipping, and on-site auxiliary power.

Imagine, if instead of shipping diesel to the island for nine months after the hurricane, relief agencies provided a solar and battery microgrid which requires no fuel budget, is more cost-effective over time, leaves the community more resilient for the next major storm event even after the aid dollars run out, and reduces local air pollution in stressed communities.

Puerto Rico is not only in the path of tropical storms, it also sits between two massive tectonic plates under the ocean, making it vulnerable to earthquakes. In January a 6.4 magnitude earthquake and weeks of aftershocks hit the island. Upwards of 15,000 Puerto Ricans were displaced, camping in tents or driveways.

Since the earthquakes began, the Footprint Project has made electricity available to over 11,000 Puerto Ricans and equipped five emergency facilities with solar-powered phone/computer charging stations, insulin refrigerators, radio communications and lighting.

When we visited in February, we spoke with families near Ponce who still felt safer sleeping in a tent in the woods — with roving 4-foot long iguanas and wild horses — than returning to their earthquake-damaged homes. In one camp volunteers were training moms how to homeschool their children and handing out colorful children’s books. The mobile solar-plus-storage trailer provided essential power at these camps to help keep residents safe and healthy. Another mobile trailer is stationed on the smaller island of Vieques to support the town’s public safety building.

The good news is that Puerto Rico actually has all the natural resources that it would need to be energy independent — tremendous solar irradiation along with wind and water resources, both land-based and offshore — but many obstacles remain. Its Legislature passed a 100% renewable energy requirement, but meeting the 40% by 2025 benchmark from its current 3% is big lift. Even before Hurricane Maria left the entire island without power for many months, Puerto Rico’s monolithic utility, PREPA, was mired in mismanagement, bankruptcy, and privatization. PREPA now has pledged to build more renewable energy, but in the short term it is investing heavily in natural gas.

The Puerto Rican Energy Bureau, which regulates island energy, is now considering PREPA’s 20-year Integrated Resource Plan (IRP). Observers like the Rocky Mountain Institute caution that the IRP overly relies on additions of “overbuilt and underutilized” gas infrastructure, creating high risk of expensive stranded resources — especially for an island that already imports nearly all of its fuel, nearly all of which is fossil-fuel based. The Rocky Mountain Institute also commented that the IRP fails to adequately consider distributed energy solutions like customer-sited solar plus storage.

While the IRP works its way through the regulatory process, it is clear that meaningful solutions are needed in real time at the local level, and that the disaster relief mechanisms in place are not designed to truly serve the needs of vulnerable populations over the long term. People across the island are taking matters into their own hands.

The Footprint Project’s vision is to support the buildout of clean energy microgrids throughout Puerto Rico (and other locations facing climate-related disasters) and build capacity for local citizens to manage their own mini-grids.

After the island economy collapsed a decade ago, thousands left for the mainland, dropping the population 12% by 2017. The PR Secretary of Education, an advocate for private school vouchers, ordered more than 100 schools closed; then Maria hit and nearly 300 more schools were closed. Now, mutual aid societies and local residents are taking over (to “rescatar”) abandoned schools, cleaning out debris, and creating new community centers for education, community support, and as emergency shelters. Along with other Footprint Project volunteers, I installed solar panels and connected battery wiring at two of these reclaimed schools.

Puerto Rico is a living laboratory for the future — a future of climate-induced floods, hurricanes, and wildfires that demand safety measures for communities — and a future that prepares by building resilient, distributed, and local energy microgrids. We hope to play a part in shaping this future, as the next hurricane season looms a few months away.

Ellen Anderson is a senior energy researcher at the University of Minnesota, an independent energy consultant, and a former Minnesota state senator. She served as executive director of the Energy Transition Lab at the University of Minnesota’s Institute on the Environment for the last five years. The lab focuses on energy storage thought leadership, cities and energy/climate planning, energy equity, grid modernization, and renewable energy.