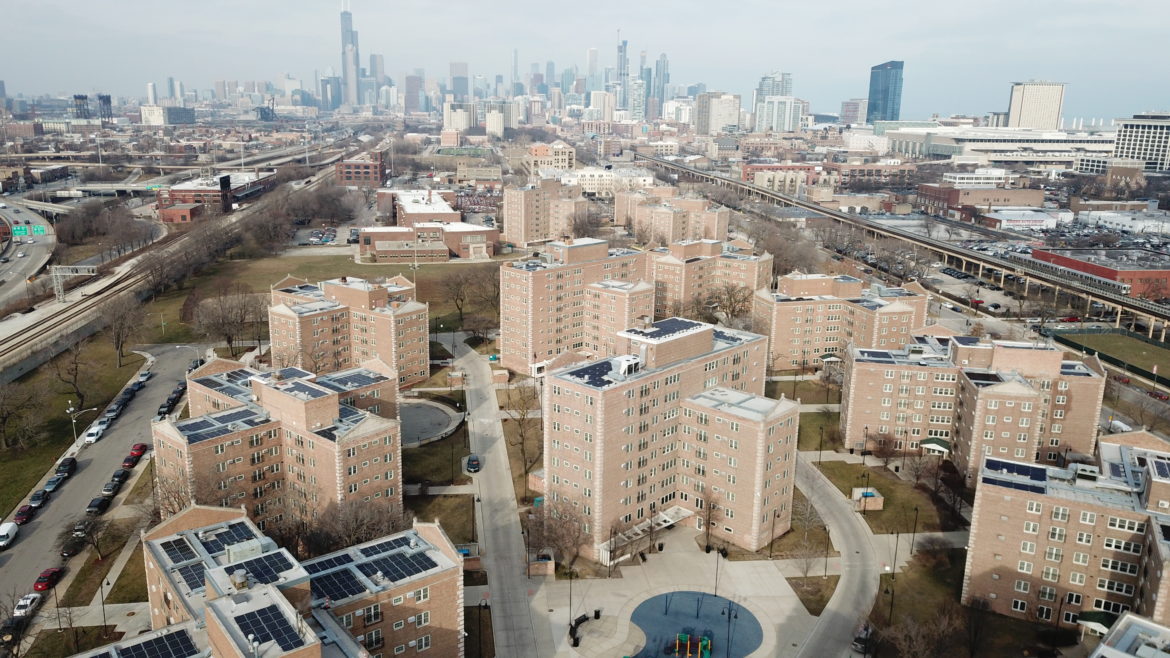 Solar on the Dearborn Homes in Chicago.

The use of power purchase agreements for solar projects had been unclear before state regulators clarified last month.

Correction: Clean Energy Development Group built a 750-kilowatt solar array at a a school in Farmington, Illinois. An earlier version of this story misstated the project’s size.

A February ruling by the Illinois Commerce Commission has smoothed the way for many schools, municipal buildings and nonprofits to obtain solar installations through third-party-owned financing arrangements, a possibility that had been thrown into doubt by utility opposition.

Third-party-owned solar installations — in which the building or site owner purchases electricity through a power purchasing agreement from the company that owns the installation — are a common model nationwide, making solar accessible to lower-income households and organizations that don’t have the upfront capital for solar, or nonprofit institutions that could not otherwise access federal tax breaks.

Power purchasing agreements, or PPAs, were not common in Illinois in the past largely because the state’s overall solar penetration was so low. But that changed with the Future Energy Jobs Act of 2017, which offered robust solar incentives, and energy legislation may be passed this year which would expand those incentives. Even as the energy law makes solar more accessible, PPAs are still considered crucial to make it affordable for more customers.

But in 2018, both ComEd and Ameren — which serve northern and downstate Illinois, respectively — filed comments with the Illinois Power Agency that could have made it much harder for solar installations with PPAs to be financially viable.

ComEd’s October 2018 comment in an regulatory proceeding regarding solar incentives asked that customers be notified that installations involving PPAs would not be eligible for net metering under public utility law.

ComEd spokesperson David O’Dowd said the utility was merely pointing out its interpretation of existing law, and not trying to prevent customers from entering third-party-ownership agreements. “We commented to ensure that customers were aware that the net metering benefit would not be available to them under certain conditions pursuant to the Public Utilities Act,” he said.

Solar advocates, customers, and developers said that some installations statewide had already been net metering with PPAs, and the filing cast doubt on existing and planned projects.

“We felt like it came out of nowhere,” said Brad Klein, senior attorney with the Environmental Law & Policy Center, which filed a comment with the commerce commission rebutting ComEd’s position. “Net metering has been around since 2007; 11 years later out of left field, ComEd files these comments on an issue that the commission has addressed before and is in common use in the market.”

The Illinois Commerce Commission ultimately agreed that the “status quo” should be maintained, including the ability of PPA installations to participate in net metering. ComEd had argued that net metering would be available to customers leasing solar panels — paying a fixed rate per month to the panels’ owner and collecting the energy. But this model entails more risk than PPAs and for other reasons doesn’t work for many customers. The commission ruled that leasing and PPAs are fundamentally similar and should both qualify for net metering.

A market in doubt

Grace Troccolo Rink is a clean energy consultant who has worked for municipal agencies including the Chicago Housing Authority and Chicago Department of Aviation. She said that she worked with a Chicago-area county on a request for proposals for more than 30 solar installations on public buildings, and expected to have many companies interested. But after ComEd’s filing, the county got few proposals.

“We heard from more than one company that they were concerned about how they’d have to structure the contract to pass muster with ComEd,” said Troccolo Rink, who declined to name the county in question. “Suddenly we had to spend at least 6 months of our negotiations just talking about how the contract would be structured. It took a lot of time, it was very confusing, and since we lost time, most of the communities lost the opportunities to secure the contracts with the 2019 federal tax credits still intact.”

The Chicago Archdiocese works with parishes interested in obtaining solar energy. Installing solar on churches is difficult given their often aging roofs and stressed finances, explained archdiocese energy and sustainability advocate David Singler, but power purchasing agreements are one of few options that can help.

“We can’t get on our own the federal tax credit or depreciation [credit] that private investors can,” he said. “If we find the right situation, PPAs could work. But a PPA without being able to net meter would be a problem for us.”

With the commerce commission ruling, he hopes some projects can move forward.

“Clarity is the best thing to have in any situation,” Singler said. “There was a lot of confusion out there, but the ruling definitely helps.”

Ameren’s 2018 comment with the Illinois Power Agency argued that the owners of power purchasing agreements should register as alternative retail electric suppliers, a cumbersome process meant for companies that provide electricity to many customers. Many solar developers would decline to do a PPA rather than register as an alternative supplier.

“It was a little scary for a while,” added architect James Holtzman, with the Clean Energy Development Group, which had a number of PPA projects in the works at schools. “There was some danger.”

The group is working on about 30 PPA solar installations at Illinois schools, Holtzman said. About five years ago, the organization installed a 750-kilowatt array at a school in Farmington, Illinois, one of the largest school solar projects in the country at the time. That was owned outright by the school, thanks to a grant. But now the Clean Energy Development Group plans to add an additional megawatt to the project, through a PPA.

“I’ve been in the clean energy and renewable energy space for over a decade now, and it’s consistently a moving target, it’s the nature of the business, unfortunately,” Holtzman said. “You’ve got to have a hard head or a good stomach or both to get into this business to begin with, but we believe in what we do and the value we bring to the community especially through our municipal and school district projects. It’s a great way for these funds to be distributed back to the communities, as well as for sustainability.”

A power purchasing agreement was also necessary for 750 kW of solar installed on the Dearborn Homes public housing development on Chicago’s South Side last fall, providing electricity for over 600 apartments and administration buildings.

“The ability for the [Chicago Housing Authority] to lock in a lower electrical supply rate was crucial for our business model to be successful,” an agency spokesperson said. “In addition, the PPA allows for the developer to receive all applicable financial incentives and to have a guarantee that we will buy the electricity generated.”

The housing autority is also considering a PPA to install solar at Altgeld Gardens, a public housing project in a remote area surrounded by a landfill, a sewage treatment plant and other environmental hazards.

“Those are exactly the type of projects we want to see move forward,” Klein said. “Arbitrarily adding cost and expense and delay really matters and makes it hard to replicate that kind of project.”

Troccolo Rink explained that ComEd offers free electricity to Chicago municipal buildings that do not generate revenue — like City Hall — in exchange for the city’s aid in right of way and other grid issues. Hence there would be no motivation or justification for the city to put solar on City Hall or similar buildings because it would mean no energy savings.

But if a third party owns solar on such buildings, it can essentially pass the energy on to revenue-generating municipal buildings, such as a parking garage, that do not get free electricity. In the end, more clean energy is generated and city taxpayers get overall savings.

Under the 2017 Future Energy Jobs Act, a third-party owner can also take on the complicated but beneficial tasks of applying for and managing the right to sell solar renewable energy credits, the way solar is incentivized under the law.

“It means communities can afford [solar] and don’t have to put the money up front to buy the system,” Troccolo Rink said. “The municipalities are not eligible for the federal tax credit or state tax credits, and they could in theory sell [the renewable energy credits], but they would have to pay for a broker to do it or take the time and effort of having a staff person dedicated to it. Having a third party take on all of that really makes solar accessible for municipalities.”

Klein noted that PPA solar installations can take advantage of solar incentives under the Future Energy Jobs Act, namely the right to sell solar renewable energy credits for the energy they generate. But the Illinois Power Agency sets the price of credits with the assumption that projects are also net metering, so using credits alone often will not make a project viable.

“It’s really important especially for these types of public sector nonprofit customers to give them all the options available and all the different kinds of tools they can choose from to make these projects work,” Klein said. “There are so many barriers to these projects — they’re harder, they take longer, they require more hand-holding — so arbitrarily taking these tools off the table has a disproportionate impact.”

The commerce commission ruling also noted that “PPAs are popular even with for-profit entities that do not want a solar asset on their books [as would be the case for ownership and certain leases] and/or would like a turnkey approach to solar.”

Love said Ameren is developing a response to the ruling, while O’Dowd said ComEd is “reviewing” the ruling.

But as Klein sees it, “Now the commission’s order finally and conclusively has put this issue to bed.”