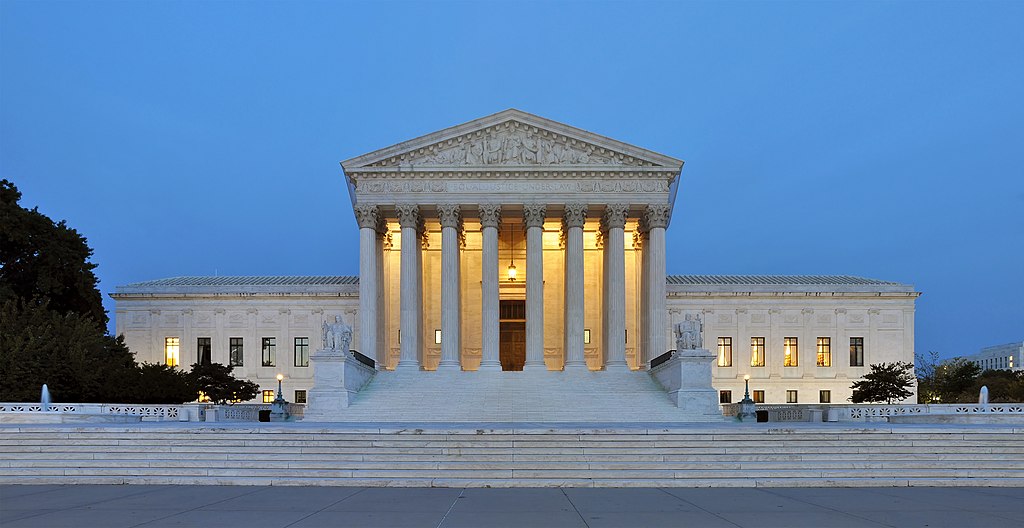 Sometime before the end of June, the U.S. Supreme Court is expected to issue a decision that — one way or another — will be hugely consequential for the future of the polemical Atlantic Coast Pipeline.

During oral arguments in late February, justices tangled with whether the natural gas pipeline can lawfully cross a section of the Appalachian Trail in Virginia on federal land.

At the crux of this case is a permit the U.S. Forest Service granted in 2017 to tunnel under the trail within the George Washington National Forest. In 2018, the Richmond-based 4th U.S. Circuit Court of Appeals ruled that the permit shouldn’t have been issued, thus halting construction.

Costs for the Dominion Energy infrastructure project now stand at an estimated $8 billion. If built, the pipeline would bisect Virginia for roughly 300 of its 600 miles to move hydraulically fractured natural gas from West Virginia to North Carolina.

The Natural Resources Defense Council has joined coalitions of conservation and social justice advocacy organizations to back the Southern Environmental Law Center in its legal clash with pipeline developers.

NRDC attorney Gillian Giannetti, a self-described “FERC nerd,” has paid special attention to the high court case. She is part of the Sustainable Federal Energy Regulatory Commission Project at the environmental nonprofit. Her area of expertise since joining NRDC two years ago is gas pipelines and liquefied natural gas terminals.

Giannetti, a University of Virginia Law School graduate, has lived in communities across the state for a decade. In an interview with the Energy News Network, she delved into some of the nuances of what the Supreme Court justices are now considering.

Q: The federal Mineral Leasing Act is at the heart of this Supreme Court case. What is it and why does it apply here?

A: The Mineral Leasing Act is a federal law that outlines when, where and how the federal government can approve a pipeline on land owned by the United States. It is a permissive statute that is very favorable to oil and gas infrastructure. It has only three exceptions for federal lands that are strictly off limits to energy development and pipeline rights-of-way. Those are lands in the National Park System, lands in the outer continental shelf and lands held in trust for Indians or Indian tribes.

Congress deemed them to be unique and deserving of unique protection. That seems to be getting lost here.

In this case, nobody disputes that the Atlantic Coast Pipeline developers want to cross the Appalachian Trail on land owned by the United States in the George Washington National Forest. Is the land at issue also in the National Park System? We hold that it is.

Our reason is that federal law defines the Park System as any area of land or water administered by the Secretary of Interior, acting through the directors of the Park Service, for recreation. The trail checks all of those boxes. It’s undisputed that the trail is meant for approved recreational purposes.

Q: As proposed, the pipeline would be buried 600 feet below the Appalachian Trail. Why were justices disagreeing about whether that is still considered a trail crossing?

A: This case can get very confusing if you try to overlap incorrect legal frames. You could clearly see that happening with the justices as they wrestled with the issues.

This Supreme Court case is narrow in that it is only looking at the applicability of the Mineral Leasing Act. Lawyers for the pipeline are trying to muddy this with red herrings by saying that the Appalachian Trail is not land. That’s too clever by half because nobody makes that distinction in real life. The trail is not severable from the land upon which it exists. Your feet touch the ground.

The Appalachian Trail is not a magic carpet that hovers above the land. If the Park Service dug up two feet of the trail to make it more even for hikers, the freshly exposed dirt would still be the trail. It’s irrelevant, for the purposes of the Mineral Leasing Act, that the pipeline would be built 600 feet underground. All that matters is that it would be built on federal Park System land.

Q: You mentioned that Justice Sonia Sotomayor cited NRDC’s amicus brief filed in the high court. How did she incorporate it?

A: This relates to another red herring where lawyers arguing for the Atlantic Coast Pipeline implied that the 4th Circuit decision amounted to stealing land from the U.S. Forest Service and giving it to the National Park Service.

We’re not talking about ownership in this case. We’re talking about land being administered by the same owner, the federal government.

The U.S. government owns the land at issue. Lands can be simultaneously managed by the Forest Service and the Park Service and nothing in this case counters that. When two regulatory schemes overlap, the more protective statute applies. The prohibitions under the Mineral Leasing Act, of no pipelines crossing, must apply. If you think of it that way, this should not be a close case.

Q: The 4th Circuit vacated at least seven other permits, meaning several agencies are revising their environmental reviews for the Atlantic Coast Pipeline. Is the pipeline immediately greenlighted if the Supreme Court overturns the 4th Circuit?

A: No. The pipeline has a lot of problems that it still has to resolve. It lacks several permits, is years behind schedule and is $3 billion over budget. Those other permits are completely unrelated to its crossing of the Appalachian Trail. That’s one of the reasons Justice Ruth Bader Ginsburg started off the questioning by asking if this case has a chance of becoming moot. The project is in trouble for lots of reasons.

Q: On a related front, the Federal Energy Regulatory Commission’s initial approval of the Atlantic Coast Pipeline in October 2017 is still pending in the U.S. Court of Appeals for the District of Columbia Circuit Court. How did that happen and why does it matter?

A: FERC reviews interstate gas projects. When FERC approved the pipeline on a 2-1 vote, there were many reasons why the agency erred. The FERC challenge highlights that there’s no clear market need for the gas transported by this pipeline and there were severe flaws in the environmental justice review of the project. The pause button has been pushed on that case while the Supreme Court wrestles with the Appalachian Trail case.

Q: Dominion Energy claimed that the 4th Circuit’s decision “imperiled Eastern Seaboard ability to access oil and gas.” Is that a fair assessment?

A: The pipeline attorneys knew they had to come up with another argument for this case so they created one claiming the trail was an impenetrable barrier, preventing natural gas supplies from reaching customers. It’s wholly inaccurate and a red herring. Even though the entire Appalachian Trail is a unit of the National Park Service, the prohibition on pipeline crossings only applies to federally owned portions, not state or private lands.

Everybody agrees that 50-plus pipelines cross the trail. That’s a strong indication that this prohibition has not seemed to imperil natural gas development. We seem to have been extremely successful in moving gas from Pennsylvania and West Virginia to Eastern Seaboard markets.

Q: To that point, the Southern Environmental Law Center found that the 55 various pipelines that cross the Appalachian Trail at 34 places were either there before the National Park Service acquired the land or were on state or private land. Should the utilities simply have sited the Atlantic Coast Pipeline differently in the first place?

A: Yes, that’s what the National Park Service told the Atlantic Coast Pipeline developers in April 2015 during the Obama administration. This is a fact that hasn’t gotten enough play. The Park Service had recommended that pipeline developers pursue a crossing they had proposed near the Wintergreen Resort close to Charlottesville because it was on private land. The developers should have known about this potential legal challenge because this issue was flagged for them five years ago and they chose to roll the dice.

Q: The 4th Circuit suggested that Dominion should have gone to Congress for an exemption in this case. What are the barriers to taking the congressional route?

A: I wouldn’t assume these are zero sum. It’s very likely these two routes were and are being pursued simultaneously. I suspect it would be a very difficult argument to make that would require exceptional political will. I don’t see a statute going through without support from the congressional delegation from Virginia. We’re not seeing support there.

Read more: A sunnier view for Atlantic Coast Pipeline opponents — but will it last?

Q: This pipeline has caused an outcry in Virginia, especially from environmental organizations, that wouldn’t likely have gained so much traction even a decade ago. What’s going on?

A: I’m not convinced that there wouldn’t have been controversy on this particular project. Pipelines are often sited in rural communities that aren’t nationally known so it’s very difficult to bring that conversation into the national spotlight.

This project was proposed to cross high-profile treasures such as the Appalachian Trail, go near historical sites such as the University of Virginia and through low-income African American communities. This is a project that was bound to pique the interest of a unique group of people who do not often agree on things. It unites affluent vacationers, hikers, wine makers and protectors of indigenous and vulnerable communities.

The untethered expansion of natural gas infrastructure — combined with increased knowledge and understanding of what causes climate change, the impacts of climate change and the vast expansion of renewable energy — has caused projects such as the pipeline to become even more vulnerable to criticism and controversy.

Q: Connected to your last point on natural gas infrastructure, is anything set to change on that front?

A: Under the Natural Gas Act, the Federal Energy Regulatory Commission is responsible for reviewing new gas pipeline projects. But 1999 was the last time commissioners updated the policy that guides its review of those projects. Since then, the commission has approved more than 450 pipelines and rejected two. The energy landscape has evolved since then. For instance, concerns about a glut of supply wasn’t even conceivable 20 years ago. Two years ago, FERC sought comment on whether it should update its policy, and thousands responded, but nothing has happened yet.

Q: Longtime court observers know that predicting a high court’s decision after hearing the questions justices ask during oral arguments can be folly. What insights can you offer after studying the case and the recent arguments?

A: I’ve gone to a lot of Supreme Court arguments, but I was not in the courtroom for this one. If I were good at projecting what the court would say, I would be a lot richer. I’ll leave the projecting to others, but I will say this: It is clear that the case captured not only the court’s attention, but also the interest of the American public. I think it’s safe to say that anything related to FERC did not used to be exciting or sexy.

Hundreds of people waited in line and slept there overnight to make sure they could get a ticket to this argument. It’s indicative of the fact that the protections put in federal law to protect natural lands are important.

Q: Is there something I left out that you want to explain or clarify?

A: There are lots of issues involving the Atlantic Coast Pipeline. The question at the Supreme Court is extremely narrow and straightforward: Can the U.S. government approve a pipeline to cross the Appalachian Trail on lands owned by the U.S. government? Under the plain language of the Mineral Leasing Act, it cannot.