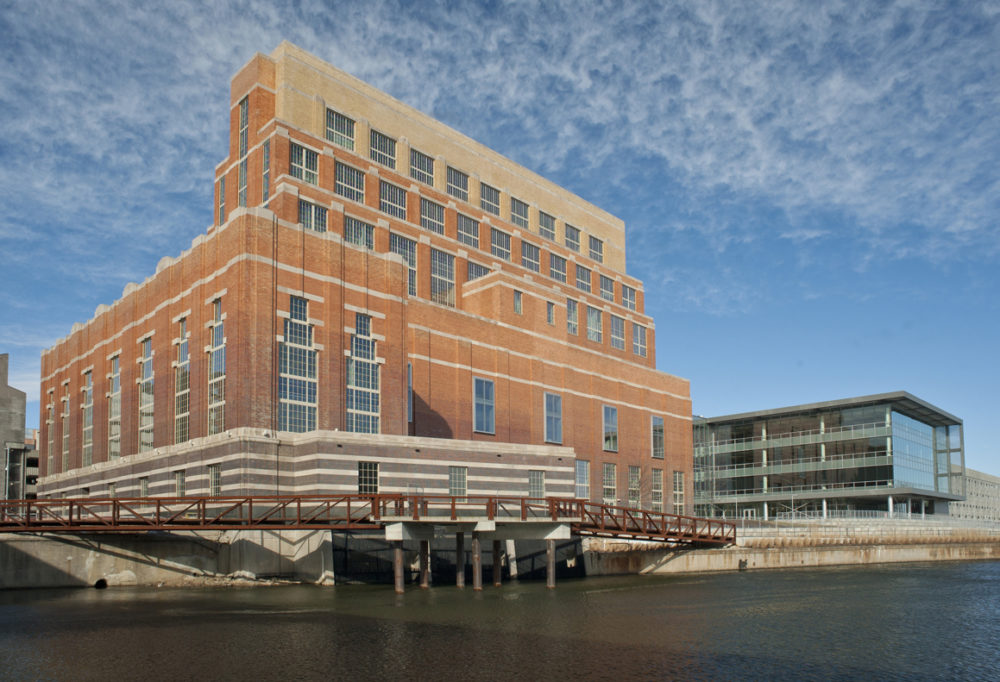 The former Ottawa Street Power Station in Lansing, Michgian, stopped producing power in 1992 and finally reopened in 2011 as the headquarters for an insurance company, the Accident Fund, now called the AF Group.

A St. Louis firm specializes in getting environmentally challenged properties ready for reuse, including coal plants.

As coal-fired power plants become uneconomic and are shut down for good, a new sort of recycling industry is taking shape: the repurposing of those plants.

Utilities across the country are finding ways to redevelop abandoned fossil-fueled sites. In January, Beloit College in Wisconsin began operating a student union and recreation center in a structure where Alliant Energy formerly burned coal to produce power.

On the southern coast of Massachusetts, a former 1,600-megawatt coal plant is being demolished to make way for a logistical port and support center for wind turbines expected to be erected about 35 miles off shore.

And in Independence, Missouri, the city utility recently received two proposals for recycling its Blue Valley Power Plant. The 98-megawatt plant burned coal for about 60 years, until switching to natural gas a few years ago. It is projected to cease its intermittent operations this summer.

One respondent to the city’s request for proposals wants to install 50 MW of battery storage. The other envisions manufacturing biofuel at the site.

Since 2014, a company in St. Louis that focuses on acquiring properties with environmental challenges and preparing them for development has purchased seven shuttered coal-fired plants — six of them in the Midwest — with a combined capacity of 3,700 MW.

“One of the really cool things about retired coal-fired plants is they have built-in infrastructure and components that can be repurposed for new industry,” said John Kowalik, director of marketing and public relations for Environmental Liability Transfer. “Like access to rail, ports and waterways … and good highway transportation. Typically the grids can be reused for another purpose too, like solar or wind. There’s a direct grid connection at the power plant.”

Given the near-certainty of continued coal plant closures, Kowalik said, “absolutely the potential to redevelop them will increase.”

The Sierra Club’s Beyond Coal campaign says there are 306 coal-fired power plants across the country that are no longer serving their original purpose. Another 224 are still burning coal to produce power.

Power generation, not surprisingly, is a theme that often crops up in these projects. Two years ago Environmental Liability Transfer’s affiliate, the Commercial Development Co., purchased the Brayton Point power plant, located about 50 miles from Boston. The 1,600-megawatt plant stopped generating power in 2017. Demolition is underway, and the developer has an agreement to transfer power to the grid from wind farms that are expected to start producing power about 35 miles off shore. The developer’s website says the project “will be capable of component manufacturing, staging, operations and maintenance of offshore wind and related sectors.”

The owner is considering the feasibility of installing some solar capacity as well.

Alliant Energy, which serves customers in Wisconsin and Iowa, is considering converting one of its retired coal-burning plants to solar generation, said spokesperson Scott Reigstad.

“There are examples every day of something happening with coal plants,” said Karl Cates, a transition policy analyst with the Institute for Energy Economics and Financial Analysis. He and Seth Feaster wrote an article published last summer about the conversion of coal-fired plants.

“We’re seeing a surge in interest around redevelopment because there is a recognition that they are assets of value,” Cates said. “There’s a return on investment waiting to happen here.”

At Beloit College, the return includes a swimming pool, indoor track, cafe, meeting rooms, fitness spaces, a lecture hall and field house in its 120,000-square-foot student union and recreation center. The brick structure is located on the bank of the Rock River.

Another popular reuse strategy is data centers. With their voracious needs for power, they can make use of the power plants’ capacity to accommodate large amounts of electricity. The owners of the Cayuga Power Plant near Ithaca, New York, announced last summer that, instead of overhauling the plant to run on natural gas, they would outfit it to house a data center deriving at least some of its power from a solar array on-site.

Another data center, along with a lakefront park, also is planned for the site of the Somerset Operating Company’s 586-megawatt coal plant on the shore of Lake Ontario near Buffalo, New York.

Plans are underway to convert nine shuttered coal plants in Pennsylvania, according to the IEEFA article. One is the Sunbury Generation plant, now partly demolished. Possible new uses include a data center, a warehouse and a medical marijuana farm.

In Michigan, Forsite Development Inc. recently finished demolishing the B.C. Cobb power plant at a site on Muskegon Lake, which is connected to Lake Michigan by a one-mile channel. The company intends to develop the site into a deep-water marine terminal.

The former owner, Consumers Energy, stopped generating power there in 2016.

Although coal-fired plants are endowed with certain infrastructural assets, there are challenges as well. Locations are all over the map — some in downtown neighborhoods, some far from any densely populated area where the options for reuse are fewer. Some are hampered because they come with ponds of coal ash, a hazardous residue from the burning of coal.

And financing can be an almost insurmountable hurdle, as was the case in Lansing, Michigan. The former Ottawa Street Power Station there stopped producing power in 1992 and finally reopened in 2011 as the headquarters for an insurance company, the Accident Fund, now called the AF Group.

It took many years for the regional economic development authority to find the insurance company and to cobble together $59 million in tax credits and tax abatements, enough to make the $182 million project financially feasible.

The insurance company invested heavily in energy efficiency measures, maintained the building’s Art Deco features and attained a LEED gold rating. And, said Jeremy Richardson, a senior energy analyst for the Union of Concerned Scientists, “made this a cool place that helped revitalize downtown.”