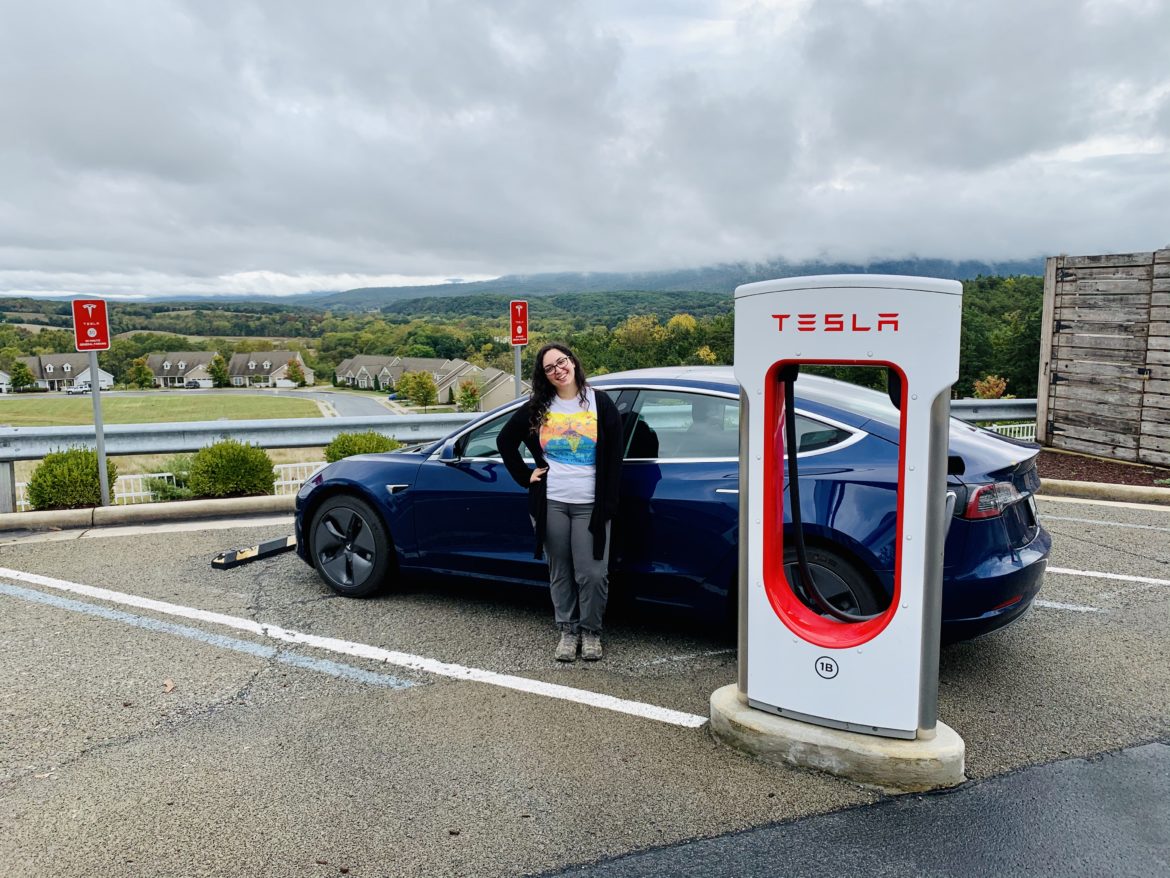 Neda Delyami and her Tesla Model 3.

Neda Deylami is one of 10 young people recently chosen for an E2 Environmental Entrepreneurs fellowship.

When Chicagoan Neda Deylami decided she wanted to buy an electric vehicle, she shopped around at Nissan and Chevy dealerships hoping to get help from salespeople in making her decision.

But the experience was frustrating. She felt she knew more than the salespeople about the Nissan Leaf and other options, especially regarding “long-term questions of ownership — charging at home, road trips, incentives, rebates, things that are changing all the time. … I had to become an expert on the issue to get what I was looking for, to know I was getting a good deal.”

She more recently traded her Leaf in and bought a Tesla, a totally different experience. As much as she likes her Tesla, she said she feels strongly that to promote the widespread adoption of electric vehicles, other dealers need to become knowledgeable and supportive of them.

“At Tesla, they’re already subject matter experts,” she said. “I’ve found more and more people using electric cars are switching to Tesla because of that. It’s not necessarily a good thing; more competition is always better.”

Now, through a fellowship from the organization E2 (Environmental Entrepreneuers), Deylami will help dealers learn more about and promote electric vehicles. E2, an organization of investors and business leaders promoting smart energy policies, awarded 10 $20,000 fellowships to young U.S. business leaders nationwide. The only other Midwest recipient is Grant Behnke of Columbus, Ohio, who is promoting sustainable practices for hotels.

Deylami is developing a training and curriculum that she hopes to present to up to 10 dealerships this year, while also staying in touch with salespeople about their work and what they need to better sell electric vehicles.

“My goal is to be an ongoing support [to salespeople], and at the same time be able to provide the greater environmental community and EV drivers a vouched-for list of dealers,” she said. “So you don’t have to worry about getting misinformation about the EV or rebate.”

Dennis Pecho, general manager at the Continental Nissan dealership in the Chicago suburbs, said he is not surprised to hear about Deylami’s experience. He said his sales force does not know a lot about the Nissan Leaf; they have only one salesperson who is “more literate” about it, and he is out of the office until April 8.

“I have 231 [types of] cars here, I have one Leaf and the demand for that car is very low,” he said. “The people who want them genuinely want them and enjoy them. They know more about the technology than a lot of times we do. Having 14 salespeople on the floor who spend a lot of time studying the Leaf when they might see one person every two months who wants one — it doesn’t make sense.”

He said the dealership sells about six Leafs a year, and he doesn’t expect that to increase any time soon.

But Deylami and other electric vehicle advocates say that doesn’t need to be the case, and more knowledge and advocacy from salespeople at dealerships would help electric vehicles and hence charging stations become more prevalent.

“Yes, auto dealers lack adequate training. They also are less incentivized to sell EVs. Car dealerships make money off service and EVs don’t require as much service,” said Micaela Preskill, Midwest advocate for E2. “With an EV there is no transmission, no spark plugs, no oil changes. Dealerships should be better educated about EVs so they are able to present the pros and cons and arm consumers with the information they need to make the right choice for them. EVs have many benefits to consumers including reduced fuel costs, federal tax credits and higher performance.”

Since Deylami founded a group called Chicago Electric Vehicles, she said people often come to her asking what dealerships they should shop at.

“There are not a lot of people I can recommend who know what they are talking about,” she lamented. “I’ve gone to dealers and asked about plug-in hybrids and they direct me to regular hybrids. Or if I came knowing I wanted some kind of plug-in car, they have often not been charged, like the Chevy Volt. I once inquired about a Leaf, and the dealer wanted to sell it to me without a charging station. That’s like a gas car that doesn’t come with a gas tank.”

Deylami said she knows some dealerships are doing a better job than others in attempting to sell electric vehicles, and she plans to target her training at those outlets. She and Preskill said that providing a good EV shopping experience is only fair to consumers, and also is an important way to help fight climate change.

“Car companies see that EVs are the future and American dealerships have the opportunity to be ahead of the curve, or they will be left behind,” Preskill said. “If dealers are better equipped to educate consumers about the benefits of EVs, more people will buy EVs.”