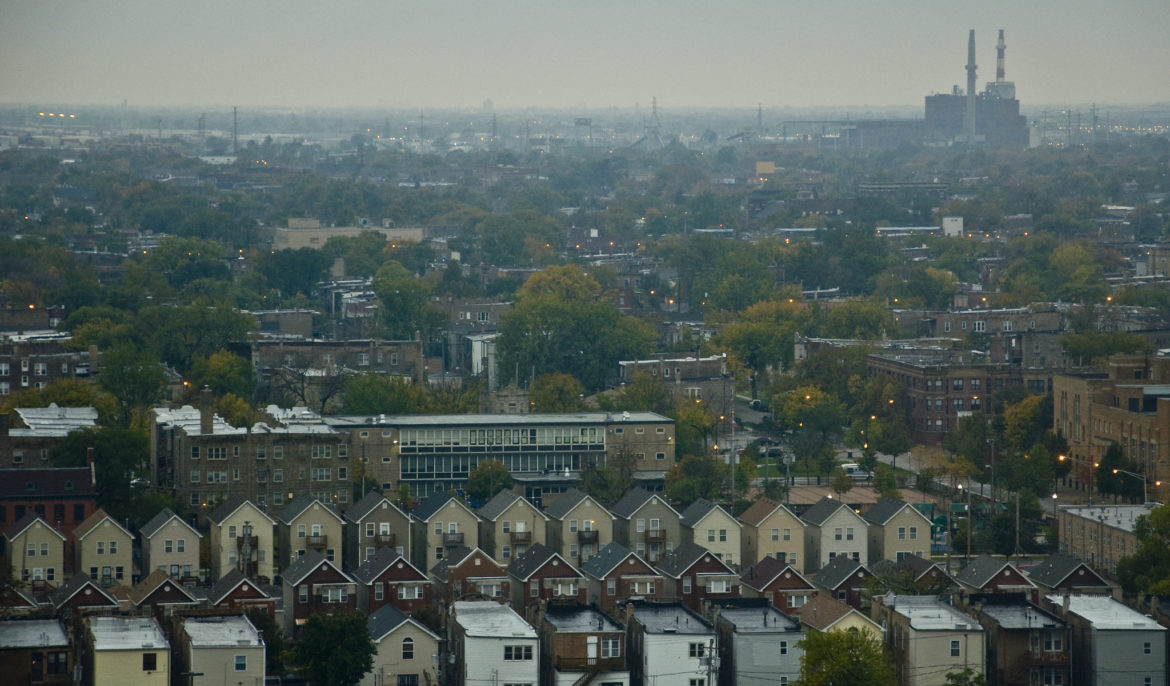 Chicago community leaders are demanding an ambitious suite of environmental justice policies and reforms following the implosion of a former coal plant smokestack that sent clouds of toxic dust across an immigrant neighborhood already reeling from the coronavirus pandemic.

Community leaders of the Little Village neighborhood called Saturday’s demolition, by a global company that plans to build a massive warehousing facility, a result of “corruption” and systemic injustice in the city’s approval and oversight processes. They demanded immediate revocation of the company Hilco’s permits to build warehousing complexes on the site of the Crawford coal plant and the Fisk coal plant nearby in the Pilsen neighborhood, and the closure of other industries and cancellation of other plans in vulnerable neighborhoods. They also demanded that community vulnerability and a company’s labor and environmental record be part of permitting processes.

“We want the community around a site to have first right of refusal,” said Kim Wasserman, executive director of the Little Village Environmental Justice Organization (LVEJO). “This disaster is the result of a corrupt system. … This isn’t a bad apple problem. Community harm is stemming from a broken, corrupt racist system.”

Olga Bautista, a leader on the city’s Southeast Side where residents have long fought corporations and city officials regarding the storage of toxic petcoke and other pollution, broke into tears as she described residents’ frustration.

“Every single time the onus has been put on community members to catch these players in their bad acts, and every single time we have to fight like hell to convince the city to take action,” she said during an online press conference. “What is absolutely unconscionable is there are still plans in motion in other parts of the city that haven’t been halted even though we are in the middle of a pandemic, and the need for clean air to breathe is paramount.”

At the press conference, residents called on Mayor Lori Lightfoot to shut down an asphalt plant in the nearby McKinley Park neighborhood that was approved and opened without an adequate community process, according to many advocates. And they demanded Lightfoot prevent the move of General Iron, a metal shredding operation, from the city’s wealthier North Side to the Southeast Side.

In a press conference on the site on Easter Sunday, the day after the coal plant demolition, Mayor Lori Lightfoot called the situation “utterly unacceptable” and said the city had immediately issued a stop work order, citation and fine to Hilco and launched an investigation of the approval process, “strengthening our protocols to ensure incidents like this never happen again.”

But community leaders were not appeased, noting that the city had approved the demolition and did not respond to desperate calls from residents who found out about it only the day before, begging for it to be halted and questioning how it could be considered an essential operation while the state is under stay-at-home orders during the pandemic.

“Sorry is not enough. The people of Little Village are fed up with the corruption,” said Laura Ramirez, who moved there with her family from Mexico 25 years ago. She said her family experienced respiratory symptoms after the demolition, but they were afraid to seek medical help for fear of being exposed to coronavirus at healthcare facilities.

“We’re talking about not only holding Hilco accountable but holding the city accountable,” said Alderman Byron Sigcho, who represents the adjacent Pilsen neighborhood where Hilco owns the other former coal plant. “This is nothing new, this is something that has been happening for a long time.”

Wasserman said that local Alderman Michael Rodriguez knew about the demolition plan for 10 days but “did nothing” and never reached out to residents directly. Residents heard about the demolition only through fliers placed on some homes the day before, and news spreading on social media.

Along with creating community advisory councils with much power over future land use and development decisions, community leaders are demanding aggressive actions to mitigate the harm from the implosion.

They want the area fully cleaned up and residents provided with alternative housing while the cleanup proceeds. They want N95 particulate-protection masks, rather than lower-grade masks already distributed, to be given to all residents, including inmates in the nearby Cook County Jail, where hundreds have tested positive for coronavirus. They want high-quality indoor air filters, and coronavirus testing and free healthcare for all residents including undocumented immigrants. They want residents compensated for damage to homes and property values. And they want a nearly $20 million tax break awarded to Hilco last year to be canceled, and residents given the power to decide how to use a similar amount of city money.

On April 15, a federal class action lawsuit was filed making similar mitigation demands. The named plaintiffs are a former Crawford security guard who lives in the neighborhood and his elderly father — Jose and Antonio Solis — and another local resident, Juan Rangel. Rangel returned from visiting his brother, who has COVID-19, to find his home coated in dust from the implosion, the lawsuit says. While he’s been a well-connected leader in the community for decades, Rangel said he had not heard about the demolition in advance.

The suit names Hilco and other contractors involved in the demolition as defendants.

“The Defendants intentionally misled residents, cut corners that prevented the demolition from occurring safely, and then proceeded with their plainly unsafe demolition and disposal during Easter weekend in the middle of a pandemic,” the lawsuit says. It says that Antonio Solis “was in his house when the dust cloud descended, coating the entire neighborhood and seeping into his home. The dust was so widespread that he felt it in his mouth” and soon experienced headaches and a sore throat. “As an older man, he is fearful that the dust will endanger his health. He is afraid to clean the dust in his home because he does not know what chemicals it might contain,” the lawsuit continues.

The lawsuit notes that “mercury, sulfur dioxide, nitrogen oxides, lead, asbestos, uranium, thorium, TPHs, and other hazardous compounds” were known to be present in and around the plant over the years, making residents fear those compounds were also in the dust. Asbestos was used extensively in power plants built before 1980, given its heat-resistant properties, and in June 2019, Hilco notified the Illinois Environmental Protection Agency of hundreds of thousands of square feet of asbestos in the plant. The IEPA also noted the presence of PCBs, VOCs and other toxic compounds found in sampling on the site.

Residents have been voicing their concerns over contamination spread by the demolition for more than a year. During a community meeting last August, they told city and state officials about their fears and demanded air monitoring and other measures. No representatives from Hilco attended on behalf of the company, other than a spokesperson who reportedly sat in the audience without identifying herself.

Hilco’s redevelopment has been plagued with problems since it bought the site in 2017. In January, a worker fell 50 feet to his death, sparking a wrongful death lawsuit from his family. Work was halted after the death, but allowed to resume several weeks later though the federal investigation of the death is still not complete. A fire also broke out on site last year.

After Hilco announced in January that a one-million-square-foot Target warehouse would be the complex’s anchor tenant, local leaders reiterated demands for the city to revoke the tax break. They also noted that warehouse jobs are typically low-paying without chances for advancement, a far cry from the commercial kitchen for local vendors or clean energy site residents had proposed for the site during an advisory council process with the city.

“Even though we knew the development was going to come, the closure and empty building became a symbol to residents that they along with others were successful in shutting down such a company,” said LVEJO organizer Edith Tovar, in an interview with the Energy News Network. “To see the implosion happen tainted that memory of a better possibility, better opportunities for the community.”