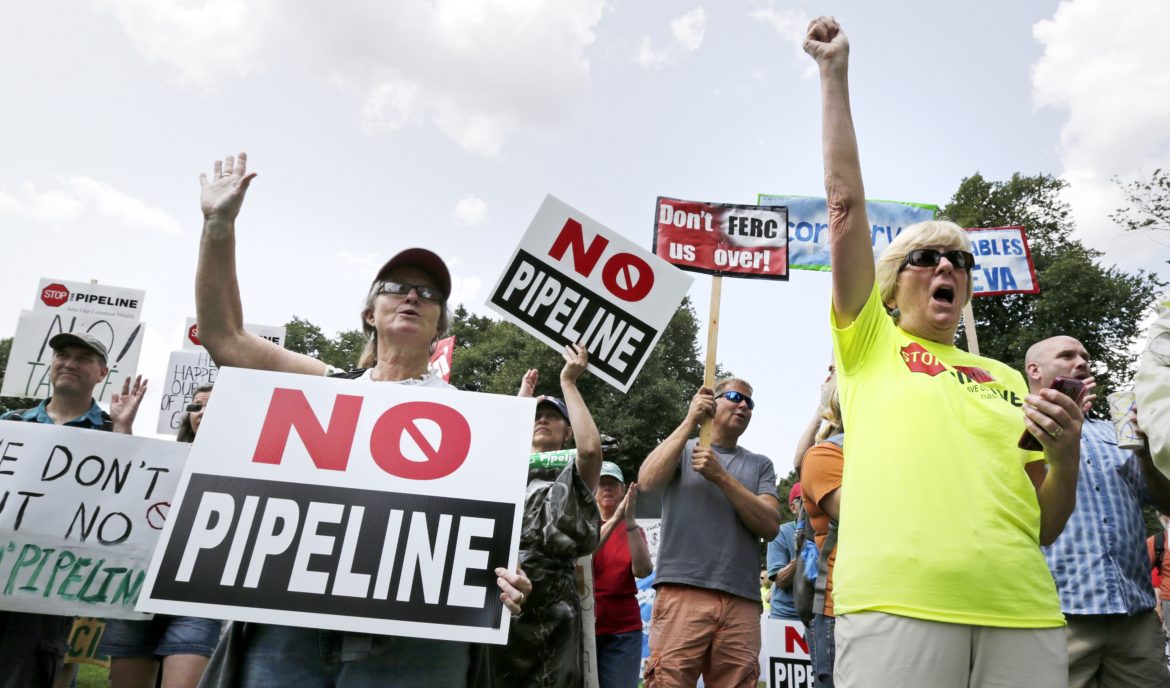 Activists propose expansion of natural gas pipelines in Massachusetts in Boston in 2014.

Environmental groups behind the lawsuit say federal regulators violated a 2017 court ruling when they approved the project.

Environmental activists have filed a lawsuit against the Federal Energy Regulatory Commission, claiming the agency flouted federal law by approving a natural gas pipeline project in western Massachusetts without properly considering the climate change impact of the plan. The case has potential to set an important precedent for how regulators are required to assess the environmental effects of greenhouse gas emissions, observers say.

“It would have a broader impact on how [the agency] has to operate,” said Adam Carlesco, a staff attorney with environmental organization Food & Water Watch, one of the groups that brought the case. “Disregarding all climate impacts is not in the public interest.”

The project at issue would add a 2.1-mile loop to an existing pipeline in the western Massachusetts city of Agawam and replace two compressor stations with one larger station. The plan has been contentious since the beginning.

Supporters say the expansion is needed to bring more natural gas into the area, where several towns have put moratoriums on new gas hookups because the existing infrastructure cannot bring in enough supply to serve additional users.

“If there is any project that needs to continue to move forward, it’s this one,” said Stephen Dodge, executive director of trade group the Massachusetts Petroleum Council. “There’s been a huge documented need for additional gas supplies here in the Northeast.”

Opponents argue that increasing capacity will give fossil fuels a greater foothold at a time when communities should be turning to clean energy. They also express concern about the health impacts of natural gas escaping in homes and along the pipeline, pointing out that the nearby city of Springfield has the highest asthma rate in the country, according to rankings from the Asthma and Allergy Foundation of America.

“This is crazy, to be adding more greenhouse gas emissions, especially for a project that we see absolutely no need for,” said Jane Winn, executive director of the Berkshire Environmental Action Team, a local activist group that is the second plaintiff in the case. “And we definitely have concerns about local air quality.”

In December 2019, the Federal Energy Regulatory Commission certified the Agawam plan, finding it to be of “public convenience and necessity,” a legally required step for pipeline projects. Opponents of the plan appealed the decision, but their request was quickly denied.

Food & Water Watch and the Berkshire Environmental Action Team then joined up to sue the agency in the U.S. Court of Appeals for the District of Columbia Circuit. The suit, filed last month, argues the commission failed to consider the climate impact gas transported by the pipeline would have when burned for power generation or residential or commercial use.

This omission, plaintiffs say, violates a 2017 decision in which the Court of Appeals in D.C. ruled the agency must consider the both the direct and the indirect greenhouse gas emissions a project would create: The “reasonably foreseeable” climate effects of using the natural gas — the so-called downstream emissions — must be evaluated alongside the environmental impact of the project construction itself.

The agency’s official position, however, is that it cannot know how the natural gas in the Massachusetts pipeline would be used, and the climate impacts are therefore not reasonably foreseeable. Thus, regulators are not obliged to make such assessments, the commission concluded.

The commission declined to comment on the case, citing the pending lawsuit.

Commissioner Richard Glick dissented from the decision to deny an appeal, saying he believes the commission’s ruling clearly ignores the precedent set by previous cases. It is, he said, inconsistent for the commission to argue it is impossible to determine the scope of greenhouse gas emissions while also saying the emissions will not have a significant environmental impact.

“That is ludicrous, unreasoned, and an abdication of our responsibility,” Glick wrote in his dissent. “A public interest determination that systematically excludes the most important environmental consideration of our time is contrary to law, arbitrary and capricious, and not the product of reasoned decisionmaking.”

Indeed, the issues in the appeal denial and the lawsuit reflect a debate that has been ongoing among energy regulators. When the Natural Gas Act — the law governing federal regulation of natural gas — was passed, the assumption was that natural gas supply was constrained, said former Commissioner Cheryl LaFleur. The goal was to ensure the scarce resource could be shared.

However, over the past 10 years, the boom in shale gas and increasing societal concern about climate change have changed the landscape.

Even before the 2017 case, there was growing discussion among commissioners about how the agency should assess climate impacts, LaFleur said. The commission’s official position was that downstream emissions were a matter for the states to deal with, though not all the members agreed. After the 2017 case, the majority of the commission contended that downstream emissions were inherently unforeseeable because it could not be known how the transported gas would ultimately be used, the same position it took in denying the appeal in the western Massachusetts case.

“This became, particularly the last several years, an issue of significant controversy among the commissioners,” LaFleur said. “As more and more issues came up in our cases, that became an untenable position, in my view.”

For LaFleur, that approach increasingly flew in the face of the commission’s obligation to consider indirect greenhouse gas emissions and, more broadly, to make decisions in the public interest. For projects intended to serve homes, businesses, and power plants, she said, there is ample information available to calculate the potential emissions impact.

In 2018, the commission initiated an inquiry into the possibility of updating its formal pipeline policy, originally issued in 1999. The agency asked for comments on, among other things, how it assesses the potential environmental impacts of a project under its consideration. The docket, however, remains open and no new policy has yet been adopted.

The plaintiffs in the lawsuit over the Agawam pipeline hope a victory will make it explicit that the commission is required to assess downstream emissions in essentially all cases, Carlesco said. This change would ideally result in lower carbon emissions down the road. And even if the Massachusetts pipeline — or others like it — are still given the go-ahead after climate impacts are evaluated, at least the process would reflect the importance of interrogating the environmental costs of our energy choices.

The suit is now working its way through initial procedural steps in the court system. In the interim, Food & Water Watch is reaching out to groups and people who are invested in these issues to see if any have interest in joining the case or filing an amicus brief.

“It would have a broader impact on how FERC has to operate and consider what projects truly are in the public necessity,” Carlesco said.