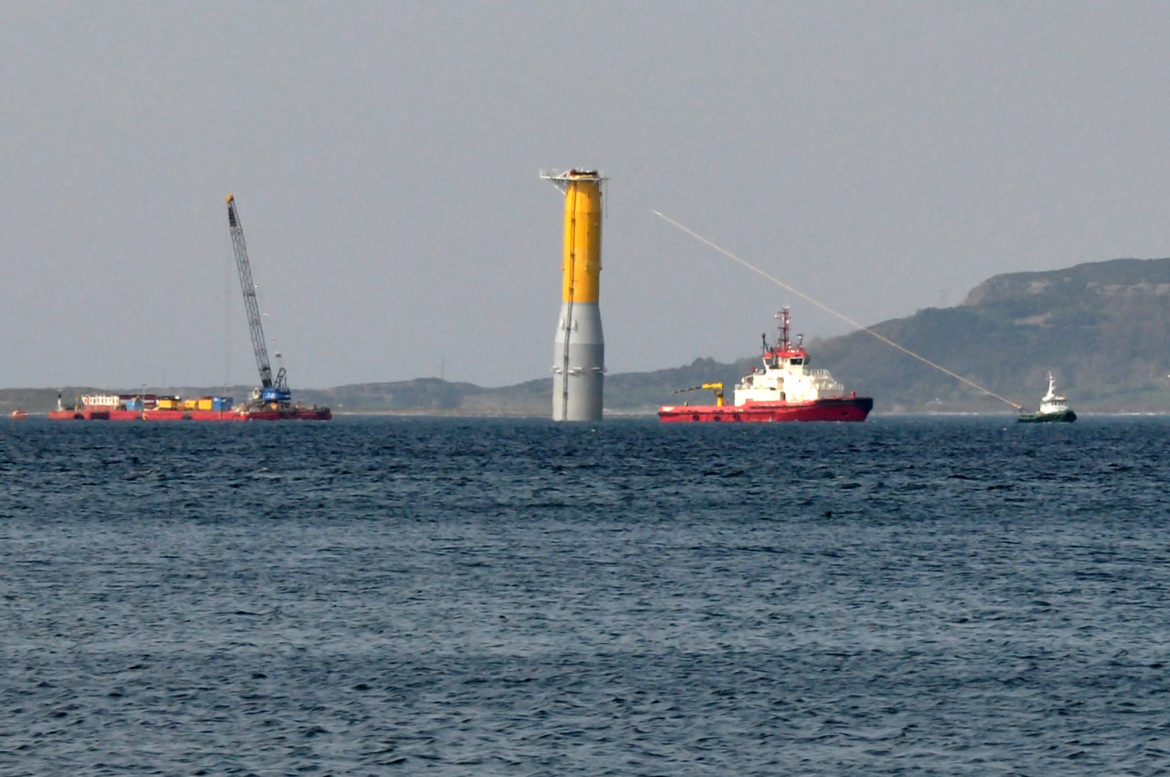 A buoyancy unit is assembled for the world's first floating wind turbine, in the North Sea.

The concrete anchors borrow a resilient pattern found in the shells of arthropods such as shrimp, crabs and lobsters.

Inspired by mantis shrimp, a team of researchers from Purdue University and clean energy startups hope to use 3D printing to create cheaper and more environmentally friendly anchors for floating offshore wind turbines.

Anchors to secure floating wind turbines to the seafloor are typically made from steel. Now, the team at Purdue is working on using 3D printing to create anchors out of concrete as multiple thin layers with a honeycomb or similar design. Stacked one on top of another, the layers create a structure the researchers compare to the shell of an arthropod, like the shrimp, crab and lobster. Those animals’ shells are inherently fragile, yet surprisingly resilient because their structure prevents cracks from spreading.

“It’s a pattern that nature found that is very efficient for improving the mechanical properties for what otherwise is a very brittle material” — concrete, said Purdue civil engineering professor Pablo Zavattieri.

“The innovation is toward reducing the capital costs associated with mooring and anchoring the floating offshore wind turbines,” said Rick Damiani, founder and principal of the Floating Wind Technology Company, one of the startups involved in the project. “That is something that’s still holding back the large-scale deployment of floating offshore wind. New solutions would be certainly welcome.”

Damiani previously worked at the National Renewable Energy Laboratory with Jason Cotrell, CEO of RCAM Technologies, the startup working with Purdue on the 3D printing portion of the project.

Cotrell added that “concrete in general is expected to create more localized jobs than steel because concrete is inherently a regional process with a well-established concrete supply chain in nearly all regions of the country.  In contrast, steel anchors are likely to be imported from other states such as the Gulf Coast States or countries with well established offshore steel fabrication supply chains.”

The precision and flexibility available with 3D printing means the structure can be designed so the weaknesses inherent in the connection points between layers essentially become strengths, the researchers explained. The design can make sure that cracks in the structure are dispersed so that the energy causing the crack dissipates and the fissure stops.

“The preliminary work is very encouraging,” explained Jan Olek, a Purdue professor of civil engineering. “We’re seeing that we can redirect propagation of the cracks … and if the interfaces are organized in space in such a way that it’s a convoluted path for the crack to follow, it takes more energy to actually form the crack.”

The team noted that 3D printing is also being explored for onshore wind turbines, offshore oil and gas infrastructure, and buildings more generally. They developed the printing technique proposed for the anchors first using cement paste, and they are now in the process of scaling-up to concrete, which is a mixture of cement mortar and coarse aggregates.

“3D printing technology is viewed by many as a waste-free enterprise,” Olek said. “You deposit the material precisely where you need it. You can be very innovative in your design, you can maximize the material in places it needs to be and minimize it in places where it doesn’t need to be.”

Zavattieri added that “self-healing materials” are in the works that could inherently seal or repair cracks, “or sense changes in temperature or humidity and react to that.” This would be a boon for offshore wind and other energy infrastructure, and such materials would work well with 3D printing.

Damiani said that technology for floating wind turbines thus far has largely been derived from the structures used for offshore oil and gas operations.

But in that industry “you can build one-off structures and recoup your costs in a short time, whereas wind can’t quite afford that because you need to build several wind turbines for each wind farm,” and it takes longer to recoup costs, Damiani said.

Damiani with colleagues at the National Renewable Energy Laboratory developed a floating offshore wind platform called SpiderFLOAT unveiled last year. Its modular concrete beams are constructed through 3D printing, and it could likely use the anchor that is being developed through the Purdue collaboration, Damiani said.

He said such innovations are “changing the paradigm of how you design and build these support structures for floating wind. … The philosophy has to shift” — from mimicking offshore oil and gas infrastructure — “and it is shifting.”

The anchor project participants say their multi-disciplinary expertise has been crucial to the work’s success. Damiani and Cotrell have deep backgrounds in offshore wind, while Purdue is known for its civil engineering prowess and its expertise in concrete, through the Lyles School of Civil Engineering, and the School of Materials Engineering, where Professor Jeff Youngblood is among the leaders of the project.

Mohamadreza “Reza” Moini, who did doctoral work on the project and will become an assistant professor at Princeton University next year, noted it is “a great opportunity to use the knowledge and technology that is becoming more and more available for the advancement of marine energy infrastructure.”

The 3D printed concrete suction anchor research is funded through the National Science Foundation and the Floating Wind Technology Acceleration Competition, which is funded by the Scottish government and run by the Carbon Trust’s Floating Wind Joint Industry Project with support from offshore wind developers.

There is still a long way to go before the anchors may actually be launched in the ocean, including testing for stability and other attributes in the lab, then large-scale testing in the environment.

The large water bodies closest to Purdue — the Great Lakes — aren’t likely to be among the early sites of the anchors or any floating wind turbines, since ice complicates the situation, Damiani said. But he doesn’t rule it out in the future. He worked on the Icebreaker Wind Farm in the works in Lake Erie, where conventional wind turbines fixed to the lakebed will be secured through “suction bucket” technology similar in principle to the Purdue anchor.

“So far it hasn’t been done, but I want to think that we can overcome that problem just like has been done for fixed-bottom structures,” Damiani said, about the prospects for floating wind turbines in the Great Lakes. “Obviously the Great Lakes have a great wind resource and [energy] load centers distributed along the shores. It would make perfect sense.”