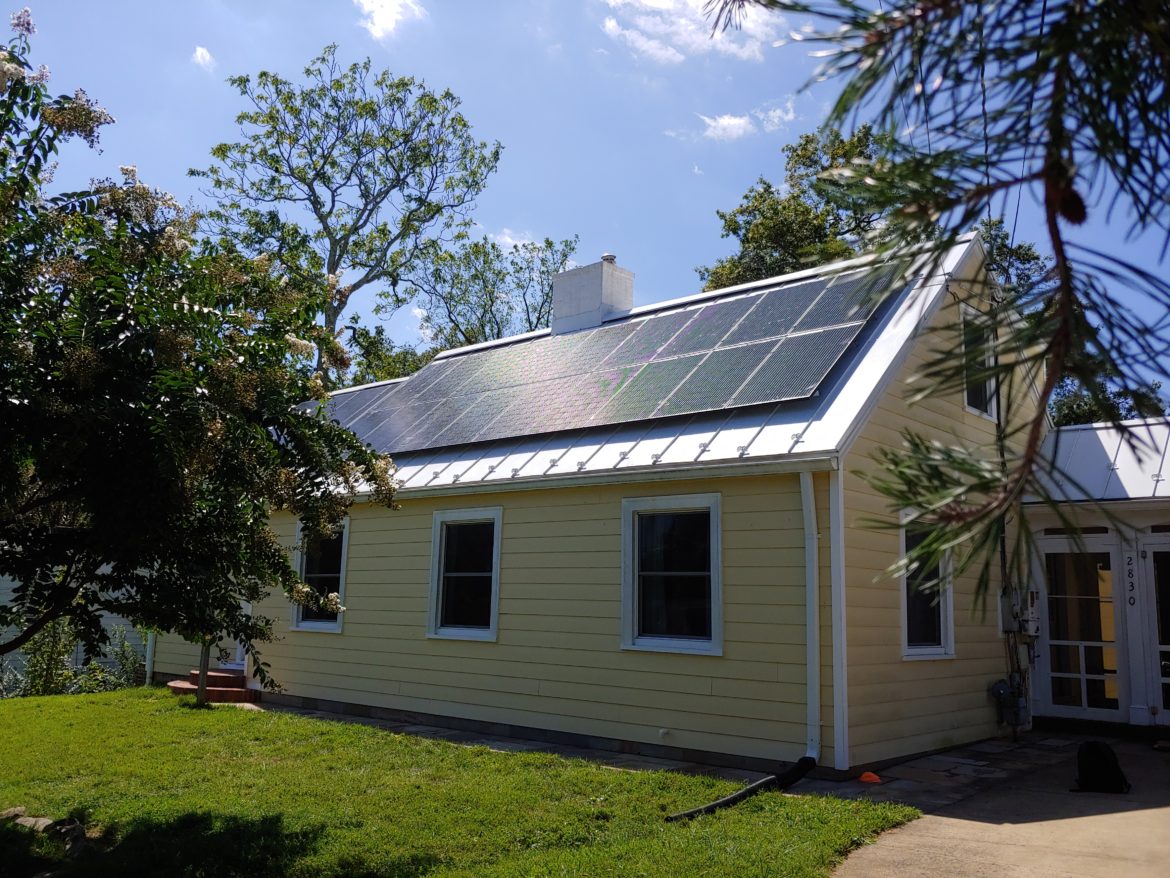 Solarize allowed Jeff Taylor to have an array of 33 panels installed on his Falls Church house in 2019 — 26 on the east side and seven on the west.

After a delay, a Charlottesville nonprofit expects the biggest numbers yet for its annual group-buying program.

The coronavirus pandemic has delayed — but not derailed — a Virginia nonprofit’s momentum at introducing novices to the benefits of rooftop solar.

Every spring since 2015, the Local Energy Alliance Program has helped dozens of northern Virginians navigate the intricacies of powering their homes with solar panels. Contractors have installed more than 3 megawatts of capacity on 372 houses and businesses.

The group-buying program didn’t want the pandemic to break that streak. Instead of panicking, organizers moved the start of its popular Solarize initiative to mid-June and pivoted to digital outreach.

“We figured, hey, let’s go ahead and push it back a couple of months,” Ryan Van Patten, LEAP’s solar program manager, said about postponing the traditional April start.

Organizers now expect the number of customers participating this summer to jump to at least 100, up from last year’s 70, in spite of barriers caused by COVID-19 and the ensuing regional lockdown.

Solarize, born in LEAP’s “hometown” of Charlottesville in 2014, expanded to northern Virginia a year later when the nonprofit set up a satellite office in the city of Fairfax.

Customers save an average of 10% to 15% on a panel array because LEAP, in partnership with the Northern Virginia Regional Commission and the municipalities, solicits bids for bulk installations with a pre-negotiated price.

Solar Energy World, one of two contractors last year, is the sole one this year. The company is headquartered across the Potomac River in Elkridge, Maryland.

“The nice thing about what we do is that solar is going to be cheaper than any other investment,” said Bryan Hacker, Solar Energy World’s vice president of sales, who grew up in northern Virginia. “It might take a little time to pay for it, but it will happen. Most products people buy don’t do that.”

Van Patten said LEAP opted to narrow the contractor count this year because Solar Energy World “came out on top when we were scoring our proposals.”

Arlington and Prince William counties are new to the Solarize fold this year, joining Fairfax County, the town of Vienna, and the cities of Alexandria, Fairfax and Falls Church.

Fairfax County came on board in 2017 just before a greenhouse gas inventory revealed that buildings are the county’s biggest emitter of greenhouse gases.

“It’s a conundrum for anyone in this field,” she said about tackling climate change most expeditiously. “Yes, large programs can make a big dent, but small programs that homeowners can participate in really do add up.”

That first year, Lavender said, information sessions were so jam-packed that the county had to limit attendance so everybody could fit in the venue. The pandemic has forced LEAP’s usual regionwide outreach — in community centers, libraries, breweries, and via bicycle tour — to shift to a virtual format.

Solar provides a mere 1% of the state’s power supply now. But Lavender and other renewable energy trackers expect the Virginia Clean Economy Act, the Solar Freedom bill and other laws taking effect July 1 to boost that figure rapidly.

Solarize will continue to be an excellent complement because LEAP and the contractors basically offer a Solar 101 class to residents seeking guidance and some hand-holding as they venture into new territory, Lavender emphasized.

“It’s helpful for people to feel like they’re going through a process that involves a prequalified vendor,” she said. “Plus, there’s the discount. This is the extra little nudge that helps them get over the finish line.”

It was just the push for Fairfax County resident Jeff Taylor. He’s been chipping away at eco-retrofits to his two-story home in Falls Church since moving in 10 years ago.

Last year, he tipped toward the rooftop array he had been contemplating for years because he was impressed with all aspects of Solarize.

“Everything was laid out really well and all my questions were answered,” said Taylor, a federal Environmental Protection Agency employee. “So I said, yeah, let’s go for it.”

He often struggles to find and keep reliable home improvement contractors, but said his dealings with Solar Energy World were smooth.

Taylor’s house doesn’t have ideal southern exposure, so the 33 panels on his white metal roof face east and west. As a Dominion Energy customer, he is able to sell excess electricity back to the utility via net metering.

“Everyone I dealt with was good,” he said, “and I’m producing more power than they anticipated when they did the modeling.”

Solar adapts to a virtual world

Another General Assembly law going live next month updates and clarifies a 2013 measure that allowed homeowner associations to impose “reasonable restrictions” on the size and placement of residential rooftop solar installations.

“That’s a very big deal,” Van Patten said. “Before this legislation, solar was a harder sell. Some HOAs just didn’t want solar in the neighborhood or to see it from the street.”

As well, he and Hacker are pleased that the Clean Economy Act and Solar Freedom measures will allow Solarize to install larger rooftop systems in Dominion territory.

Solar Energy World has long served customers in Maryland, Pennsylvania, New Jersey, Florida and Washington, D.C., but it was only last year that it ventured into Virginia.

“We had planned to stick our toe in the water in Virginia with some marketing, then we heard about LEAP,” Hacker said. “It was fortuitous timing after we first won the Solarize bidding process in 2019.”

The pandemic forced the company to adapt. In March, only five of its 70 to 80 employees were allowed in the Howard County office. The rest worked from home. Gradually, more employees are returning to the office and the 15 who were furloughed are slowly coming back to jobs in sales and operations.

“We’ve been installing systems throughout,” he said, adding that crews are outfitted with masks, gloves and booties. “We transitioned to screen-sharing technology right away so we’re not coming into contact with homeowners a whole lot.”

Overcoming those hurdles has not compromised the company’s exacting requirements on aesthetics.

“We believe solar should look like it belongs on a roof,” Hacker said. “I don’t want people cringing when they drive by.”

Why not, he asked, use the lid covering your home as more than a weather shield?

“It’s cheaper to use your roof to generate power than just using it to keep the rain out.”

Correction: This article has been updated to correct the name of contractor Solar Energy World.