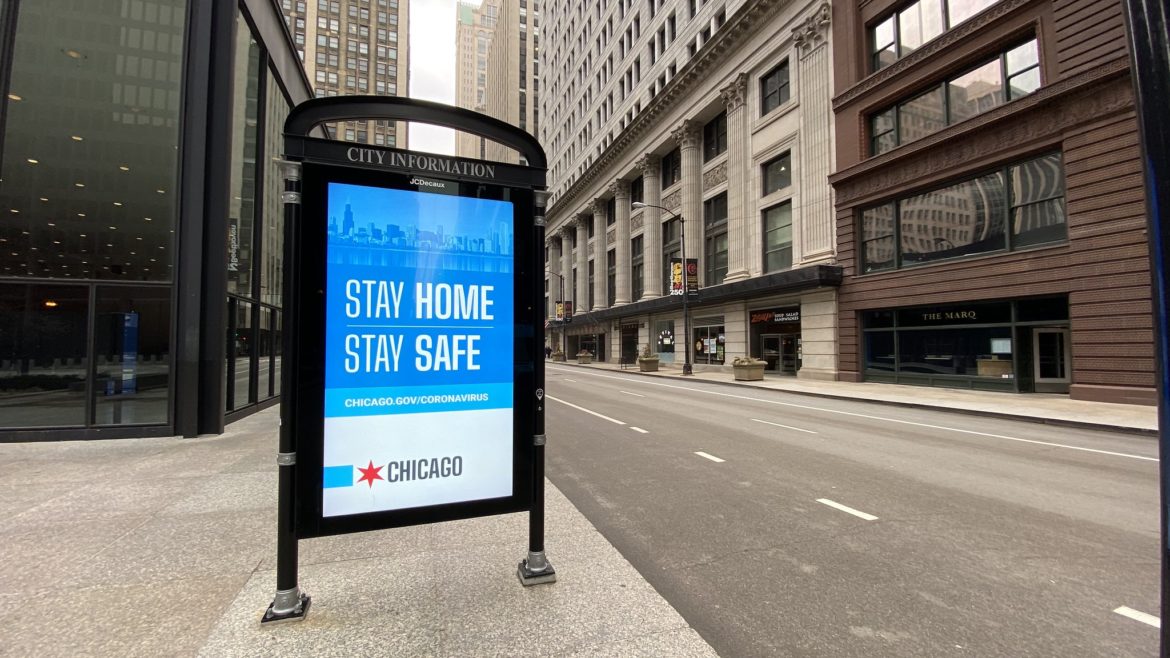 A sign encourages Chicagoans to stay home to slow the spread of the coronavirus.

The agreement, approved by the Illinois Commerce Commission in a unanimous vote during a special open meeting Thursday morning, is being held up by consumer advocates as a potential model for states across the U.S. as they loosen restrictions enacted in response to the COVID-19 pandemic.

More than 45 million people in the U.S. have filed for unemployment during the pandemic, including more than 1.3 million in Illinois. Data shows the pandemic has disproportionately affected minorities and those in low-paying jobs, who were already more likely to face difficulties paying for essential services like utilities, with nearly one-third of U.S. households struggling to pay their energy bills as of 2018, according to the Energy Information Administration.

Rosazlia Grillier, a mother who lives in Chicago’s Englewood neighborhood, said the pandemic “has added to the nightmare that people were already living every single day.”

“However, the bright side of [the pandemic] is it has brought to the forefront these things that we’ve been trying to present all along,” said Grillier, who co-chairs an anti-poverty campaign with Community Organizing and Family Issues, a group that helped negotiate the agreement and that advocates for low-income families across Illinois.

As part of the deal, Illinois utilities will contribute about $47 million in combined funding to a new COVID-19 Bill Pay Assistance Program to provide relief to customers with outstanding charges.

The program will apply as much as $500 to cover overdue payments for customers who qualify for the Low Income Home Energy Assistance Program. Customers at or below 150% of the federal poverty line who do not qualify for LIHEAP because of their immigration status or other reasons will also be eligible for the debt relief. A family of four with an annual income of $39,300 or less would qualify for the program.

“This is an unprecedented thing for utility companies to do, which is one reason we’re so excited about it,” said Emily Creahan, an organizer with Community Organizing and Family Issues.

The federal Coronavirus Aid, Relief, and Economic Security Act provided $900 million to help low-income households pay their utility bills, but advocates have argued the amount won’t be nearly enough to ease the burden on those impacted by the pandemic’s economic toll.

Illinois is one of the first states to finalize a utility recovery plan.

“The COVID-19 crisis has greatly exacerbated many of the financial hardships thousands of Chicagoans were already facing in their everyday lives, forcing many to choose between paying for their utilities, their food, or other essential costs, all while facing the prospect of incurring crippling levels of debt,” said Chicago Mayor Lori Lightfoot in a statement. “I am proud to be joining the many public leaders and consumer advocates in creating this relief plan and setting a nationwide example on how cities and states can work together to help uplift our communities during this unprecedented time.”

Illinois was among many states that prohibited utility shutoffs and late-payment fees when the pandemic hit to ensure that residents sheltering in place maintained access to electricity, gas and water in their homes.

Uncertain of how long the moratorium would last, consumer advocates, the state attorney general’s office and the city of Chicago began negotiating with regulators and utilities in April to come up with a plan to help residents as the state begins reopening.

The agreement finalized Thursday extends the moratorium on shutoffs and late fees until 30 days after all regions of the state reach Phase 4 of Gov. J.B. Pritzker’s “Restore Illinois” plan for reopening, or until Sept.1, whichever comes first.

Pritzker said this week that much of the state is on track to move to Phase 4 on June 26.

Additionally, reconnection fees must be waived for six months after the end of the moratorium period for customers who qualify for LIHEAP and for any financially-strapped customers, who need only to provide a verbal statement that they are experiencing financial hardship.

“It’s common sense,” said Grillier, who has at times struggled to pay utility bills while she battled cancer and raised two daughters. “I am concerned about folks across this state, not just in my community. Folks across this state, they were already in hard times. [The pandemic] has added fuel to that fire.”

Utilities in Illinois have responded to the pandemic in different ways. ComEd has offered to restore electricity to customers who had their service disconnected for nonpayment prior to March 13. Other utilities, including Ameren Illinois and Peoples Gas, have not stated publicly that they would reconnect service for customers who had service disconnected prior to the pandemic.

A spokesperson for Ameren Illinois did not provide answers to questions about the number of reconnections, if any, performed by the utility since mid-March, or about the number of customers who have enrolled in financial assistance plans since the pandemic began.

A Peoples Gas spokesperson said the company has not disconnected service for any customers since November 2019.

In addition to debt forgiveness, the agreement requires utilities to extend the time customers have to pay overdue charges under Deferred Payment Arrangements, with periods of up to 24 months for customers who express financial hardship and up to 18 months for other customers.

Under normal circumstances, customers with payment plans receive no longer than 12 months to pay their bills.

The agreement also prohibits utilities from reporting nonpayments or late payments for active customers to credit bureaus and reporting agencies for six months after the end of the moratorium.

By making it easier for financially-strapped customers to pay overdue bills through more generous payment plans, utilities expect to reduce the total amount of uncollectible expenses, which by law is paid for by customers.

“We can keep people engaged and connected, get them on the right payment plan, reduce some of their debt,” said David Kolata, executive director of Citizens Utility Board, a Chicago-based consumer advocacy group that helped negotiate the agreement. “And if we do it right, you can actually save money for [all] consumers.”

Like Kolata, other consumer advocates hope the agreement will lead to more changes that help low-income households.

“We view this as a first step in examining and trying to improve energy affordability,” said Karen Lusson, a staff attorney with the National Consumer Law Center who helped negotiate the agreement on behalf of Community Organizing and Family Issues.

Lusson noted a recent report by the Illinois Department of Commerce and Economic Opportunity showing that even after receiving assistance through LIHEAP, the poorest Illinois households still spent one-fourth of their monthly income on energy bills.

Under the new agreement, utilities must “begin a discussion” with stakeholders within 45 days about making services more affordable for low-income customers, with a focus on establishing discount rates for struggling customers.

“That’s important because this information will give the commission and stakeholders the opportunity to analyze what’s happening in particular communities,” Lusson said. “And particular with communities of color and whether they’re being disproportionately impacted.”