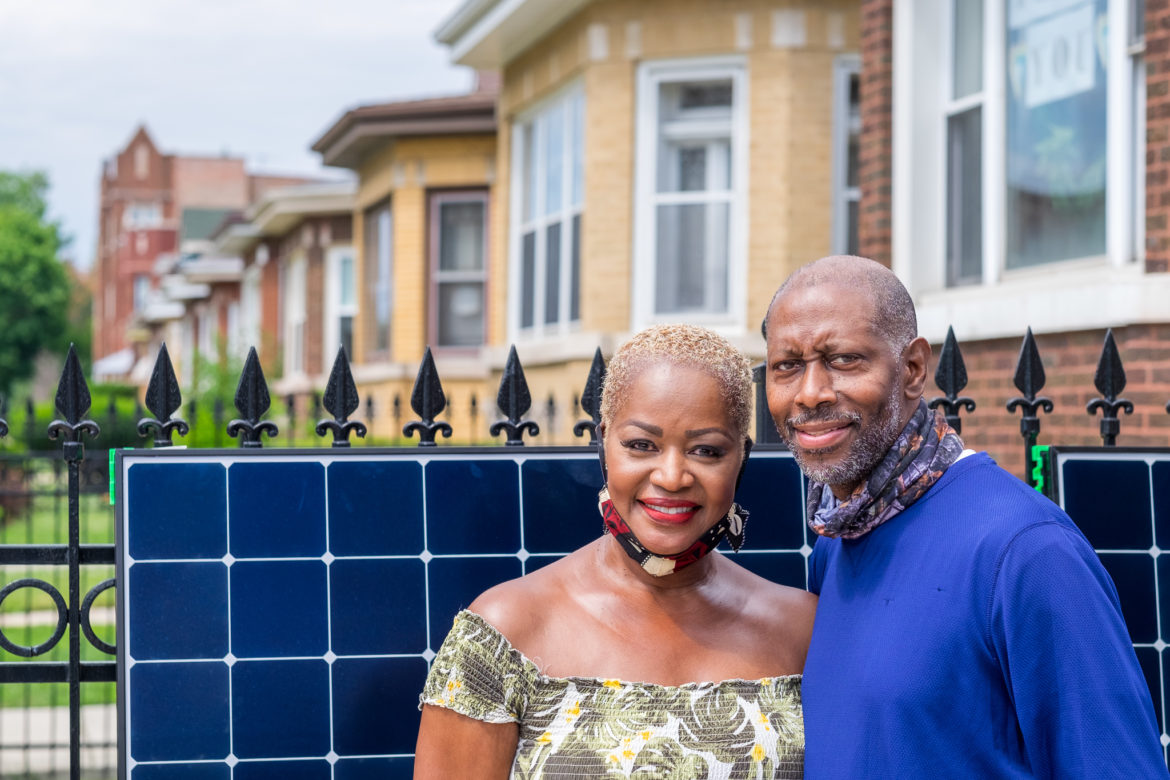 Debra and Greg Earl in front of their Chicago home with one of the solar panels to be installed on their roof.

The Illinois Solar for All program was slow to start in part because of its complexity and consumer safeguards.

Having always been “the go-green types,” Debra Earl and her husband last summer decided they wanted to get solar panels on the bungalow where they’ve lived for 22 years on Chicago’s South Side.

Now, their home is powered by a solar array that will provide almost all their electricity needs, and they won’t pay a cent for the power. The company Certasun installed and owns the rooftop system, and Earl and her husband get the power for free.

The deal almost seems too good to be true, as Certasun president Josh Lutton describes it. That may be part of the reason more people have not thus far enlisted in the Illinois Solar for All program that provides solar power to qualifying residents with no upfront cost, while guaranteeing them at least 50% savings on their energy supply costs.

Certasun has branded its own offerings under the program as Certasun for All, wherein residents pay nothing for the energy from the solar installation. The company is still able to make a profit by leveraging federal tax incentives and selling renewable energy credits, the bedrock of the Illinois Solar for All program created by Illinois’s 2017 Future Energy Jobs Act, known as FEJA. The objective was to spark solar development in environmental justice communities, rural areas, and other places meeting federal income guidelines.

The first and only projects under the program were installed last week by Certasun, all on the South Side of Chicago. Distributed solar programs created by FEJA have been slow to get off the ground, in part because of the complexity and the fine-tuning that had to be done after the law was passed. And since Illinois Solar for All targets underserved communities, there are extra safeguards in place to avoid communities being victimized by unscrupulous actors, as has been a problem in the past with alternative retail electricity suppliers.

“We found a fair amount of skepticism when we were marketing it initially,” Lutton said. “Potentially that’s because of the historical bad actors — not necessarily the solar industry but the energy industry — people preying on the community and offering things they couldn’t deliver.”

The Earls found out about Illinois Solar for All through the Historic Chicago Bungalow Association, soon after they’d started seriously discussing solar. “I was just elated, it was just unbelievable, and serendipitous it would fall on our laps the way it did,” she said. “We were looking at it as a way to help the environment but of course also reduce our electricity costs.”

Clean energy advocates say they hope that interest in the program, from both solar developers and residents, will accelerate in coming years.

“We expect more interest in the program now that residents and other solar developers see the results,” said Laura Oakleaf, senior program manager for Illinois Solar for All for Elevate Energy, the organization that administers it. “Our next program year is starting in early July, and we’re hoping to see more distributed generation residential projects for low-income homeowners and renters.”

While other distributed solar programs under FEJA have essentially run out of money, there is still ample funding for Illinois Solar for All, and the proposed Clean Energy Jobs Act seeks to further expand incentives for solar installations and jobs in under-served communities.

“Several customers told me they’d been thinking about solar for years and years, and were incredibly excited when they found out it might realistically be something they could do,” Lutton said. “Frequently it’s the first solar system in the neighborhood, which I think is great. As we know from the broader solar industry, every time someone sees a solar system on their neighbor’s house, it makes them more likely to want to do solar themselves.”

Lutton noted that in order to participate, residents not only need to meet income or other definitions of environmental justice and underserved communities, but need to have roofs and wiring systems up to code, internet access to process the ongoing renewable energy credit accounting, and other structural requirements. Since Certasun works only with single-family homes, they also must be homeowners, though Illinois Solar for All also has provisions for multifamily dwellings.

Illinois Solar for All also includes a clean energy job training component, wherein community organizations host solar academies and help trainees get certified at no cost to participants. At least two of the Certasun employees who installed the Illinois Solar for All projects went through these trainings.

Rodrigo Rico, 27, saw that the solar industry was poised to blossom in the Midwest after he moved here from Mexico, and he wanted to be part of it. He went through the training program at the National Latino Education Institute last year. Now he said he earns more in solar than in his previous construction work, and he sees it as a growing opportunity for the future.

Kevin Perry, 29, previously a manager for the Chicago Park District, said he wanted to learn more about solar since “I try to live an eco-friendly lifestyle.” He went through the training hosted by the Chicago Urban League.

“I love it, I love it,” Perry said. “The team I work with, the company I work for, Certasun, they’re literally the best employers I’ve ever worked for. It’s an amazing program, it’s really going to be impactful and help a lot of people.”

Perry is looking to buy his own home before long, and he plans to install solar.

Earl, who works with at-risk youth, invited neighbors to come watch the installation on June 26.

“I’ve spread the news,” she said. “We may see some more solar on my block. I’ll do my best to get as many people in the program, or to convert them, as I like to say.”